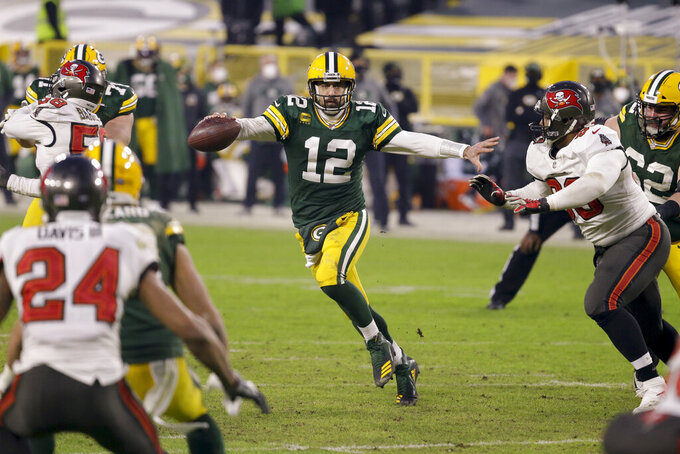 Green Bay Packers quarterback Aaron Rodgers (12) evades a tackle as he looks to pass against the Tampa Bay Buccaneers during the second half of the NFC championship NFL football game in Green Bay, Wis., Sunday, Jan. 24, 2021. (AP Photo/Mike Roemer)

GREEN BAY, Wis. (AP) — All-Pro quarterback Aaron Rodgers says “I don’t think there’s any reason why I wouldn’t be back” with the Green Bay Packers next season.

But he added that his future isn’t necessarily in his control.

Rodgers was clarifying remarks he made Sunday after the Packers’ 31-26 NFC championship game loss to the Tampa Bay Buccaneers. Rodgers said after the game “there’s a lot of guys’ futures that are uncertain, myself included.”

“Obviously after the season I had, potentially winning MVP and we obviously made another good run, I don’t think there’s any reason why I wouldn’t be back,” Rodgers said Tuesday during his weekly spot on SiriusXM Radio’s “The Pat McAfee Show.” “But there’s not many absolutes, as you guys know, in this business. So to make an absolute statement about something that is not an absolute, I didn’t do it.”

While discussing his postgame comments, Rodgers said Tuesday that it “just kind of hit me in the moment” as he was thinking about some teammates whose futures were uncertain. The Packers’ list of potential free agents includes All-Pro center Corey Linsley and Pro Bowl running back Aaron Jones among others.

Rodgers was asked Tuesday if the comment about his uncertain future was an attempt to capitalize on his leverage after a season in which he earned All-Pro honors. Rodgers threw 48 touchdown passes and five interceptions during the regular season.

“I haven’t even had the conversations yet,” Rodgers said. “This is Day 2. Yesterday was exit meetings. I had my meetings with my quarterback coach and offensive coordinator, and you say goodbye to your teammates and stuff, and you start to clear your locker out. But I’m around this week. I'm not like jetting out of town and, ‘Sayonara, Green Bay.’

“There’s conversations to be had. I’m going to have them with the right people. But it’s the same conversations we have every single year. There’s no big, ‘I’m going to come to the table with I need this, this and this.’ We have honest conversations about where we’re at every single year, whether that’s with (general manager) Brian (Gutekunst), (coach) Matt (LaFleur), (CEO) Mark (Murphy). I’ve had these conversations for years. That’s part of being a leader on the squad and having a pulse on the team and the direction we’re going.”

Rodgers has spent his entire NFL career in Green Bay and has three years remaining on the four-year, $118 million extension he signed in August 2018. The two-time MVP has said on multiple occasions that the Packers’ decision to select Utah State quarterback Jordan Love in the first round of the 2020 draft complicated his hopes of finishing his career in Green Bay.

“Naturally there’s times where you let your mind go to, ‘Maybe I’m going to be a Packer for life,’ or, ‘I’m going to be like a Tim Duncan or a (Derek) Jeter or Kobe (Bryant) and play with one team my entire career,’" Rodgers said Tuesday. “I think naturally you dream about that. That’s kind of like a dream scenario. I’ve talked about that for much of my career. I think when they drafted Jordan, it was more just like the reality kicking in, going, ‘Hey, that’s actually never the case. There are no absolutes in this business.’"