Pete Carroll optimistic deal will get done for DK Metcalf 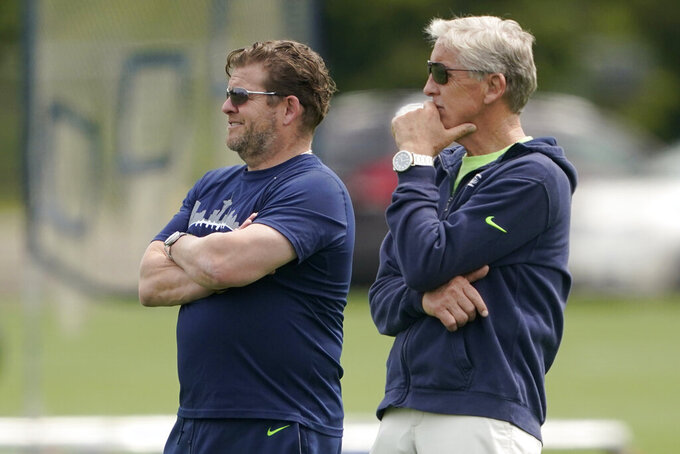 Carroll said Thursday after Seattle wrapped up the three-day camp that he remains confident a deal with Metcalf can be reached. He cited the Seahawks' previous success in reaching agreements with star players landing their first big contracts.

"We’ve been through this for years, you know. And it’s a challenging time,” Carroll said. “We’ve had so many high-profile guys that have gone through this process and how’s that worked out for us? We figured it out in time. And so (GM John Schneider) is on it and he’s as experienced as you can get at handling this stuff, and DK’s got great representation and DK is a heck of a kid.”

Metcalf is entering the final year of his rookie contract, which will pay him about $3.99 million for the upcoming season. He would seem to be in line for an extension in the ballpark of what A.J. Brown, Cooper Kupp and other wide receivers have received this offseason.

Metcalf has been around the Seahawks for stretches of the offseason workouts while rehabbing from foot surgery.

Carroll noted it will be important not to let the situation linger into August, especially with the Seahawks breaking in a new starting quarterback.

“These are crucial weeks to get something done," Carroll said.

Carroll provided an ominous update on running back Chris Carson and his attempt to return following neck surgery last season. Carroll said Carson has not been cleared and is still working to get full range of motion in his neck.

Carson is expected to meet with team doctors and his surgeon later this month to get a clearer idea of whether there is a path forward that would allow him to play. Carson did not attend the minicamp.

“Our guys love this game that they grow up playing, and when they sense that there may be an end to it, it’s hard. It’s difficult, and it’s real,” Carroll said. “And we’re going to love him through it and help him as much as possible, if that’s the case, like we do with everybody when it comes to the end of it. It’s inevitable. It’s coming, but it’s always too soon, so we’re trying to fight that off.”

Carroll said the 27-year-old visited the team about 10 days ago. Carson has played his entire career for the Seahawks, but played more than 12 games only twice in his five seasons. Carson’s best season was 2019 when he rushed for 1,230 yards and seven touchdowns in 15 games.

“We had a real good chance to hang out with him and feel him, and he’s concerned because he wants to play,” Carroll said. “He loves the game, and he’s a worker. He wants to work and push and all that, (but) there’s some things that he was still a little bit restrained to do. So he wasn’t quite ready to do everything at that time, and it’s just hard on him. He’s battling. He’s doing everything he can. He wants to compete all the way to the last word."

Carroll reiterated that Geno Smith has the lead in the quarterback competition ahead of Drew Lock heading into training camp, largely due to Smith’s experience with Seattle’s offensive system. But Carroll said Lock will get his chances to make up ground during training camp, either through structured opportunities in practice or during the first couple of preseason games.