Redskins near crossroads for new home to replace FedEx Field 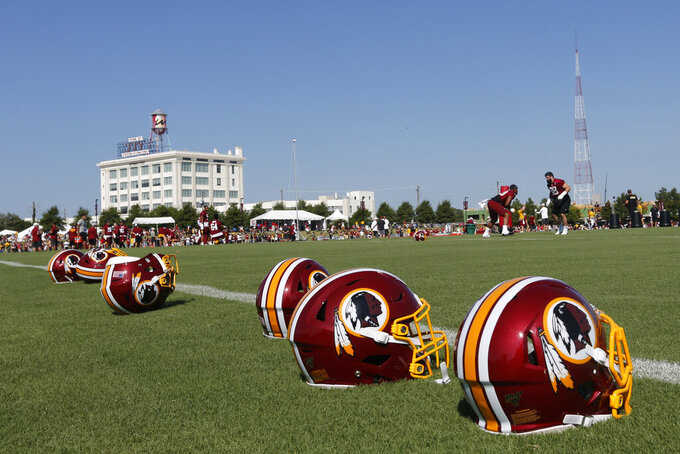 Helmets are lined up along the practice field as players begin drills during the first day of the Washington Redskins NFL football training camp in Richmond, Va., Thursday, July 25, 2019. (AP Photo/Steve Helber)

RICHMOND, Va. (AP) — FedEx Field is just 22 years old but a concrete relic of stadiums past, with the clock ticking on its status as an NFL building.

The Washington Redskins' training camp home away from home is only 6 years old and yet it's also on borrowed time.

On the field, Washington is three years removed from its last playoff appearance, 27 from the Super Bowl glory years and has missed the postseason 21 times in that span. Off the field, the team's future is a wide-open book with numerous possibilities on where it will play home games and hold training camp.

While roster moves like selecting quarterback Dwayne Haskins in the first round will affect wins and losses, the organization is in the midst of stadium negotiations that will determine the long-term direction of the franchise.

"As you can see with the teams that have done new stadiums, it's for the next generation," President Bruce Allen said in a sit-down interview with The Associated Press. "A stadium location and building is for the next 40 years — where you're going to be and the home. It's taken into account where technology is going and where people want to work, live and play in the same location. It's critical. It's critical for the way you're going to present your team to your fans and how accessible you can be for your fans."

Talks are ongoing with Virginia, Maryland and the District of Columbia on a new stadium that would replace FedEx Field when its lease expires in 2027. Sites near Dulles International Airport in Virginia, National Harbor in Maryland and RFK Stadium in D.C. are the leading candidates, though Allen was unwilling to publicly divulge who's likely to win the bidding process.

"There is dialogue each week and different concepts and different ideas," Allen said. "So it's exciting: Utilizing (owner Dan Snyder's) vision for what the new era is going to look like in stadiums. We have beautiful models for all of them."

It probably won't include the infamous moat that generated a buzz three years ago. But the new facility that should rival the Dallas Cowboys' "Jerry World" will be a significant upgrade over FedEx Field, which lacks charm, convenience and many modern amenities and was ranked 30th of 32 teams by Stadium Journey.

In 2017, then-Redskins quarterback Kirk Cousins said on FM-106.7 in Washington that the FedEx Field grass "probably doesn't look like a professional NFL field should." The team has worked to shore that up since, but technological advancements should make its new stadium a far better playing surface.

The fields at the training camp facility in Richmond have provided almost ideal conditions since opening in 2013. All of it came at a cost that makes the continuation of Redskins camp in Virginia's state capital beyond 2020 unlikely.

It cost $10 million to build as part of a $40 million agreement with the city, and the Redskins spend copious amounts of money each year to move their operations down I-95 from their regular facility in Ashburn, Virginia. The Redskins are one of just 10 teams to still go away for training camp.

"We think it's great for camaraderie with the players," Allen said. "It gives an ability to have a complete focus on football without the distractions of being at home. We still feel that way."

The team says Richmond has received more from the Redskins' charitable efforts, fans, media and visiting teams than it has contributed. Virginia Commonwealth University in January appraised the facility to be worth $17 million.

"I think it's worked out great for Richmond. It's worked out well for us from a football operations standpoint," Allen said. "What we get from the community, it's fantastic."

But the training facility and Redskins' presence each summer hasn't been the financial boon to Richmond that the city expected. VCU estimated the city will fall $4 million short of costs by the end of the deal next year and wouldn't break even until 2022 or 2023.

Players seem to like getting away, especially Richmond native Morgan Moses, who gets to have his family at camp and sees benefits beyond football.

"It's a great deal to the city just having this," Washington's starting right tackle said. "It gives people something to do, man. It gets a lot of people out of trouble in the Richmond area. It's a beautiful setup here. To see these people come out every day, it's a great deal, man. We could be in Ashburn and nobody around."

That's a very real possibility two years from now unless the team and city agree to a new deal. Coach Jay Gruden could hold training camp on the moon and wouldn't care.

"It's just practice and meetings no matter where you do it," Gruden said Sunday. "On a parking lot, on a field, in Richmond, back home, California — wherever you want to do it. ... Richmond's a nice place. It's a great field for us. But at the end of the day, it's all about getting our players ready in the meeting room and out on the practice field."

Allen said in a recent radio interview the team would like to have a stadium agreement done within the next year. Three years before the potential opening date is the real deadline to make sure construction can be completed on a complex that would include a full-time practice facility, too.

Before a site is selected, there will be plenty of debate about whether the expanse of land by Dulles or National Harbor or the nostalgia and convenience of RFK Stadium should be the Redskins' future home.

"I think (RFK is) a great location for everyone in Washington, D.C. — easy to get to and it's actually in D.C.," said Washington native Vernon Davis, who went to games at the old stadium as a young kid. "As long as it's still in the area, that's all that matters: Washington, D.C., Maryland and Virginia. That's what everyone cares about."