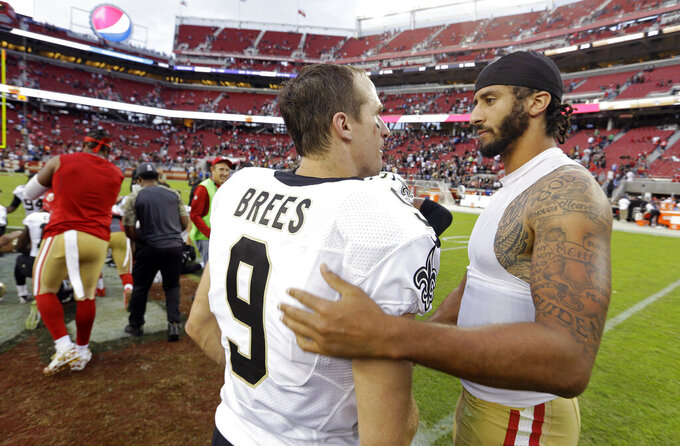 FILE - In this Nov. 6, 2016, file photo, San Francisco 49ers quarterback Colin Kaepernick, right, is greeted by New Orleans Saints quarterback Drew Brees at the end of an NFL football game in Santa Clara, Calif. As athletes and sports organizations around the world speak out against racial injustice in the wake of George Floyd’s death, Drew Brees drew sharp criticism after he reiterated his opposition to Colin Kaepernick’s kneeling during the national anthem in 2016. (AP Photo/D. Ross Cameron, File)

His contemporaries drove that home when they pilloried him this week for repeating a long-held conviction he'd always felt comfortable expressing.

In the wake of the police killing of George Floyd, Brees repeated his opposition to kneeling during the national anthem. And the biting backlash that followed prompted the Saints' star quarterback to issue a public apology Thursday in which he acknowledged he totally “missed the mark.”

When Brees expressed his position on the anthem three years ago, he was one of many voices in a crowded conversation. But when he repeated it Wednesday, he learned in humbling fashion how times have changed.

The intensity and frequency of protests stemming from Floyd’s killing less than two weeks ago have signified that wider segments of the U.S. population view police brutality and racial injustice as matters of greater urgency.

“I recognize that I should do less talking and more listening,” Brees wrote in the apology posted on social media. “When the black community is talking about their pain, we all need to listen.”

In 2017 many teams opted for anthem compromises that did not involve kneeling, even as they sought to carry forward former San Francisco quarterback Colin Kaepernick's protest of the same social issues that now surround Floyd's killing. Many teams opted to remain standing with locked arms, reminiscent of civil rights protests. The Saints, Brees included, chose to kneel moments before the anthem and then stand as it began.

This week the same sentiment during a Yahoo Finance interview drew widespread condemnation. A number of high-profile athletes, including LeBron James, as well as several current and former teammates, teed off. Critics saw Brees' take as tone deaf amid ongoing emotional protests around the country that sometimes have devolved into violent and destructive riots.

Saints safety Malcolm Jenkins called Brees “part of the problem,” in a video he posted on social media.

Later Wednesday night in New Orleans — where Brees could seemingly do no wrong — marching protesters could be heard slandering the quarterback. Videos appeared on social media of people burning Brees' No. 9 Saints jerseys.

Marc Morial, the National Urban League president and former New Orleans mayor, said in an email to the AP that while he has grown to respect Brees over his many years with the Saints, he found the quarterback’s comments to be "thoughtless.”

“The events of the last few weeks have lent weight to the argument that it is the subject of the protest, rather than the method, that makes many Americans uneasy,” Morial said, adding that he appreciates Brees' willingness to reconsider his words and hopes it “leads to a productive dialogue among his peers.”

While the apology was a first step, time will tell how well the 41-year-old Brees can repair relationships as what could be his final NFL season nears.

New Orleans linebacker Demario Davis, an outspoken advocate for racial justice, suggested during a CNN interview that Saints players would be able to accept Brees' apology.

"That is a form of true leadership,” Davis said. “That’s taking ownership. What we had hoped the first time was that Drew would elaborate more on racism and the sentiments of the black community. He admitted he missed the mark.

“For him to come out and say ‘I missed the mark, I’ve been insensitive but what I’m going to start doing is listening and learning from the black community and finding ways that I can help them.’ I think that’s a model for all of America.”

On Thursday night, Brees videotaped an additional apology in which he stated, “I just want you to see in my eyes how sorry I am. I know that I have hurt many people, especially friends, teammates, former teammates.”

“I will do better, and I will be part of the solution, and I am your ally,” Brees added.

This isn't the first time Brees has found himself on the defensive for the way he chose to express his beliefs.

Last year, he took heat for recording a public service announcement promoting “Bring Your Bible to School Day” for the group Focus on the Family, which has actively campaigned against gay rights. Brees said he never meant to associate himself with anti-gay messaging and took issue with anyone who accused him of doing so. He also stood by his message in the video.

Despite any missteps, Brees has been one of the most respected players in the NFL for reasons beyond his record-setting play on the field.

He has cultivated a reputation as a pious family man. He has dedicated untold hours and about $35 million to charitable contributions along the Gulf Coast since joining the Saints 2006, when he became a leading advocate for New Orleans’ recovery from Hurricane Katrina.

Recently, he donated $5 million to coronavirus relief efforts in Louisiana.

“It takes somebody of character to acknowledge that they’re wrong and they messed up in a way,” said Carolina Panthers tight end Chris Manhertz, a former Brees teammate in New Orleans. “Everybody has their own perspective and I can’t take that away from him, but it’s just a matter of acknowledging what is going on and being empathetic. Things like that go a long way in terms of understanding things that you may not have been exposed to or experienced.”

That doesn't mean Brees still doesn't have more work to do to back up his empathetic shift in tone.

“It's not just saying we want to change,” Davis said on CBS Sports Radio. “It's the actions that's actually going to allow us to change.”