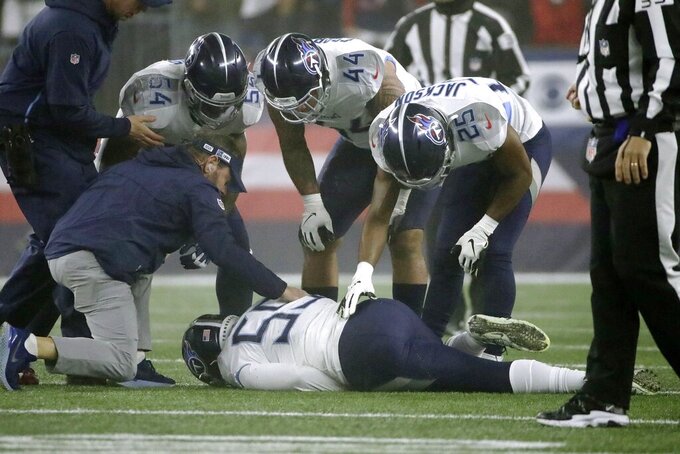 Tennessee Titans linebacker Jayon Brown receives attention on the field after an injury in the first half of an NFL wild-card playoff football game against the New England Patriots, Saturday, Jan. 4, 2020, in Foxborough, Mass. (AP Photo/Elise Amendola)

The Titans ruled out Brown and wide receiver Adam Humphries for Saturday night's game. Humphries will miss a sixth straight game with an ankle injury.

Brown played about 10 snaps last week in a 20-13 wild-card victory over the defending Super Bowl champion New England Patriots before hurting his shoulder. Brown's speed will be missed as the Titans defend Ravens quarterback Lamar Jackson.

Cornerback Adoree Jackson practiced fully after missing the past two days. He will be available for a second straight game after missing four games with a foot injury.

Returner and wide receiver Kalif Raymond practiced fully for a second straight day and will be available after missing the past two games because of a concussion.