Titans struggled to get Henry involved early, fall to 4-5 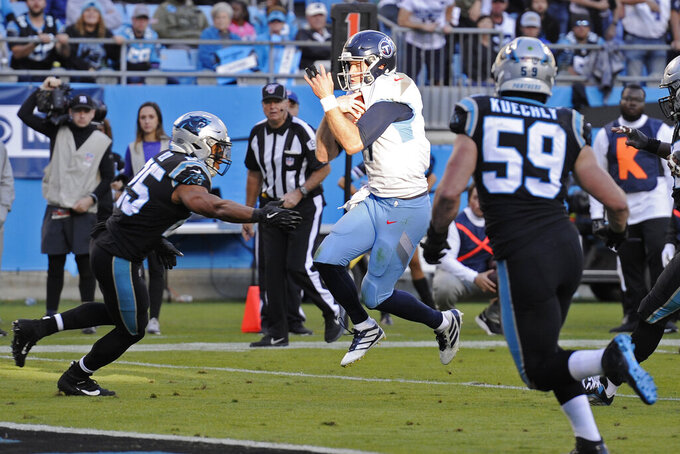 CHARLOTTE, N.C. (AP) — The stat line was a head-scratcher, for sure.

Derrick Henry had two carries for 4 yards in the first half against a Carolina Panthers' defense that had just allowed 232 yards rushing and four touchdowns the previous week to the San Francisco 49ers.

That certainly wasn't by design.

Penalties led to long down-and-distance situations, turnovers kept the offense from getting into a flow and the Titans were never able to get their star running back involved in the first half and fell behind 17-0 en route to a 30-20 loss on Sunday.

"We weren't playing clean football," quarterback Ryan Tannehill said. "We have to clean that up. You're not going to put yourself in position to compete for wins if you are constantly shooting yourself in the foot."

Case in point, the Titans were called for 33 yards in penalties — on one drive alone. Left tackle Taylor Lewan compounded a holding penalty with a facemask and guard Nate Davis also was flagged for holding.

In all, the Titans were flagged 11 times for 99 yards.

Combine the penalties with three turnovers — two on Tannehill interceptions — and four sacks allowed, and Ryan Succop missing three field goals in his return and it's difficult to win.

"Sometimes that is the way the game goes," Tannehill said of Henry's lack of first-half carries. "You never really know how it's going to go. You have a plan when you come in and how you expect it to go, but sometimes it doesn't work out that way."

Slow starts have become the norm for the Titans, who have failed to score in the first half of four games this season.

Tennessee entered the game 27th in the league in offense and 20th in rushing, and again made mistakes while falling behind. The Titans had managed to battle back to win back-to-back games under Tannehill the previous two weeks, but Sunday was a setback.

If there is a silver lining, it's that the second half produced yards and points.

The Titans scored touchdowns on three possessions, none more impressive than the opening drive of the third quarter when they moved 67 yards for a touchdown behind seven carries for 47 yards by Henry, who plowed over defenders with force and determination.

Henry finished with 99 combined yards and two touchdowns, but it wasn't enough.

He said he wasn't frustrated by the lack of carries in the first half but was instead bothered by what he called "self-inflicted wounds."

"We can't start off like that with a team like that," Henry said. "We just gave them all the momentum with those penalties. We've got to start fast, be better as a whole and be focused. That's what we need to do."

The Titans are 4-5 and two games back of the Houston Texans in the AFC South entering next week's home game against Kansas City.

After that they have a week to regroup with the bye.

The season isn't over, but the clocking is ticking and if the Titans hope to make a playoff run they can ill afford another mistake-filled game like Sunday.

Titans coach Mike Vrabel said Henry was a part of the game plan in the first half, but turnovers — Tannehill threw an interception deep in his territory and Dion Lewis fumbled — and penalties limited what the team wanted to do, which was establish the run and throw the ball off play-action fakes.

The second half is more of what the Titans wanted.

Tennessee scored three touchdowns in the second half on six possessions and got Henry more involved. He had 95 yards after the break on 14 touches and scored on a 8-yard touchdown run and 23-yard reception from Tannehill on a slip screen.

The Titans finished with 431 yards, which left Vrabel encouraged that they can build off the second half.

"We need to have that every single day, every time we come to work — that type of urgency I think was there in the second half," Vrabel said of the second half. "That's what we have to try to do. Whether we run the football, whether we're practicing, whether we're going to meetings, that urgency needs to be there in everything we do."