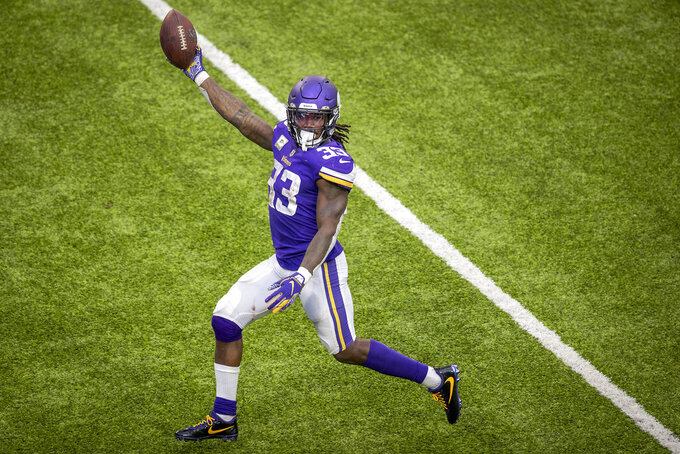 Minnesota Vikings running back Dalvin Cook holds the ball up as he runs into the end zone during the second half of an NFL football game against the Detroit Lions, Sunday, Nov. 8, 2020 in Minneapolis. (Elizabeth Flores/Star Tribune via AP)

CHICAGO (AP) — Kirk Cousins remembers signing to play for Michigan State, then finding out a few weeks later some prospect from football-obsessed Texas was joining the Spartans as part of Mark Dantonio's first recruiting class.

It wasn't a good feeling.

Nick Foles set all sorts of records previously held by Drew Brees at Westlake High School in Austin. Cousins, lightly recruited out of Holland, Mich., figured his own chances at playing were about as good as completing a Hail Mary.

The former college teammates will be on opposite sides when Cousins and the resurgent Minnesota Vikings (3-5) visit Foles and the struggling Chicago Bears (5-4) on Monday night.

“I remember looking up on a website to just learn about him, and he had played in the Texas state championship at the biggest division,” Cousins said. “He had broken all of Drew Brees’ records at his high school, and I thought to myself, ‘I’m screwed. I’ll never play at Michigan State with a guy like this.’”

Both players wound up doing just fine for themselves.

Cousins is a two-time Pro Bowl quarterback who landed what was then the biggest contract in NFL history when he left Washington to sign a three-year, fully-guaranteed $84 million contract with Minnesota in 2018. He agreed to a two-year, $66 million contract extension in March.

Foles was the MVP of the Philadelphia Eagles' Super Bowl 52 victory over Tom Brady and the New England Patriots. After an injury-filled season in Jacksonville where he lost his starting job, he got traded to Chicago in the offseason and took over for Mitchell Trubisky midway through a victory at Atlanta in Week 3.

But in 2007, Cousins and Foles were freshmen competing to back up then-junior Brian Hoyer.

“Kirk’s always been a really talented player, even then at Michigan State,” Foles said. “Hard worker. Would always do the little extra things — work in the weight room, film. We had a couple classes together. Just a really smart guy. We were only there a year together, but not surprised at all with the success he’s had.”

Foles, who backed out of a commitment to Arizona State following a coaching change, seemed to have the early lead over Cousins with his size — he was listed at 6-foot-5 and arm strength. He played in a game against Alabama-Birmingham. Cousins bulked up during a redshirt season and narrowed the gap.

A few weeks after the spring game, Keith Nichol transferred from Oklahoma after losing a competition with Sam Bradford. Foles then announced he was leaving, and went on to excel for three seasons at Arizona.

Cousins, meanwhile, started for three years at Michigan State, leading the Spartans to two 11-win seasons and a spot in the inaugural Big Ten championship game. He finished his career as their all-time leader in yards passing (9,131), completions (723) and touchdown passes (66).

It won't be all about the quarterbacks on Monday night.

The Bears will have a different play-caller on offense, with coach Matt Nagy handing those duties to coordinator Bill Lazor in an effort to spark a unit that ranks among the NFL's worst. Chicago will also try to contain another top running back in NFL rushing leader Dalvin Cook after holding Tennessee’s Derrick Henry to 68 yards.

Minnesota has lost four straight games to Chicago. And the Vikings have really struggled at Soldier Field, losing 14 of 17 since the stadium reopened in 2003 following renovations.

Minnesota, meanwhile, appears to be steadying itself after a 1-5 start. Victories over Green Bay and Detroit following a bye have the Vikings in contention for a playoff spot.

A big reason is their star running back.

Cook has been on quite a roll the past two games, with 478 yards and six TDs from scrimmage. He ran for a career-high 206 yards and two touchdowns in a 34-20 victory over the Lions last week.

“Just turning it loose," Cook said. "Just trying to do it all for my team to get a win. Obviously, we started this thing behind the 8-ball. And like I said last week, we lost some games that we weren’t supposed to lose, and we know that. We’re just trying to play catch-up, and I’m just trying to give my team a fighting chance. You’ve got to commend the guys up front.”