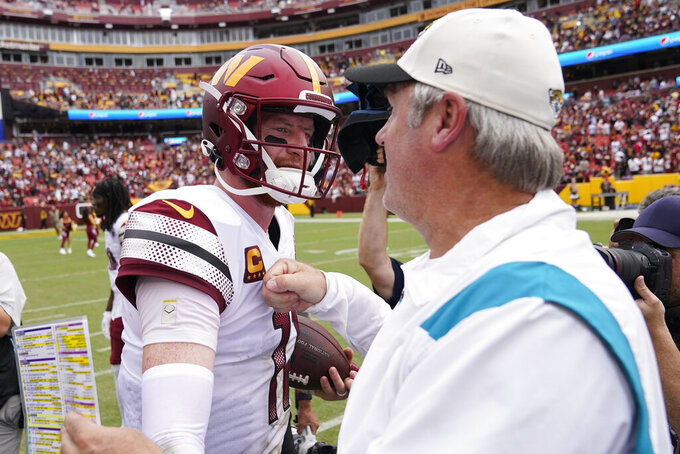 Russell Wilson is up next in the NFL’s Week 1 revenge tour.

Wilson returns to Seattle on Monday night to play his first game for the Denver Broncos. Mayfield came up short Sunday when the Browns beat the Panthers 26-24 on a 58-yard field goal. Flacco had no chance against the Ravens, who pounded the Jets 24-9.

Wentz didn’t face his former team — he’ll play against the Eagles in two weeks and the Colts next month — but his first game for the Washington Commanders came against Doug Pederson, the coach who drafted and developed him into an MVP candidate by his second season before both were quickly run out of Philadelphia.

Pederson made his debut with the Jacksonville Jaguars in his return to the sideline after the Eagles fired him following the 2020 season, just three years removed from leading Philadelphia to the franchise’s first Super Bowl title.

Wentz vs. Pederson lacked the personal feelings surrounding the “Baker Bowl” in Carolina, though a couple Commanders fans carried signs that read: “Carson Wentz Revenge Tour.” Wilson vs. The 12s will be on another level.

There never was animosity between Pederson and Wentz despite the coach benching the QB two years ago. They embraced before the game and spent a few minutes chatting.

Then, Wentz threw four touchdown passes, including a pair in the fourth quarter that followed interceptions on consecutive plays, to lead the Commanders to a 28-22 comeback win.

“It was very cool seeing Coach Pederson. ... (Jaguars Offensive Coordinator) Press Taylor, some other guys that (are) familiar faces that I’ve worked with for a long time,” Wentz said. “I have nothing but respect for and wish him the best. And it was fun to kind of see him, catch up again and compete against him today.”

Even though his team lost, Pederson appreciated Wentz’s effort.

It was the first time Wentz had four TD passes since he tore two knee ligaments in a win over the Los Angeles Rams on Dec. 10, 2017. His fourth one in that game came a few plays after he shredded his left ACL and LCL.

Nick Foles replaced Wentz and went on to lead the Eagles to a victory over the New England Patriots, earning Super Bowl MVP honors. Wentz hasn’t been the same since that season.

He lasted only one year in Indianapolis but now has a third opportunity to prove he can be a franchise quarterback. Against the Jaguars, Wentz displayed the good, the bad and the ugly.

He showed his playmaking ability, made several strong throws and wouldn’t give up after he made poor decisions that have become too common.

The Commanders need Wentz to invigorate a fan base that stopped showing up for a few reasons.

Under owner Dan Snyder, the team hasn’t won consistently, and has been embroiled in more controversy. They need a new stadium. A segment of fans, including those chanting “Let’s go Redskins” before Wentz threw a go-ahead TD pass to Jahan Dotson, hate the name change.

There were thousands of empty seats among the 58,192 people in attendance for the season opener. However, Wentz sent them home rejoicing after an exciting finish.

Will more fans come out for the next home against the Eagles in Week 3 to prevent a Philly crowd takeover?

“After the lull there and we got a couple big plays, you could really feel the energy and the momentum in the stadium and hats off to the fans for trusting us, believing in us and staying with us,” Wentz said.

Now, it's Wilson's turn to take center stage for an emotional game.