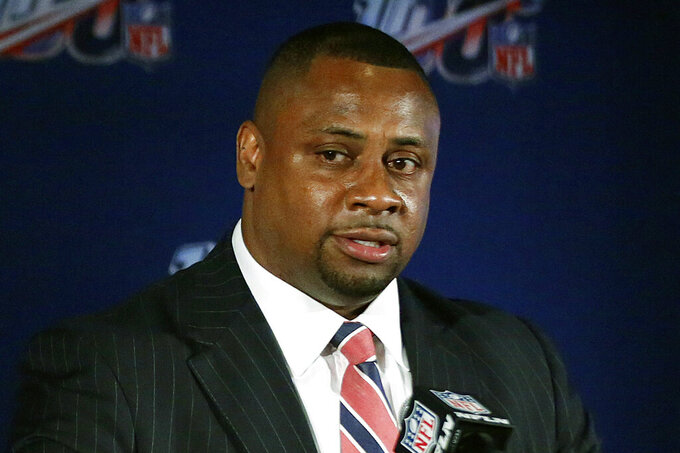 FILE - In this May 22, 2019, file photo, Troy Vincent, NFL executive vice president of football operations, speaks to the media during the owners meetings in Key Biscayne, Fla. Wisely, the NFL has taken baby steps toward some sort of normalcy. It has moved slowly in allowing a small number of team personnel to return to club facilities. (AP Photo/Brynn Anderson, File)

Call it support. Call it pressure. However you describe it, the NFL is going to get it regarding playing games on schedule.

And barring a setback in the reopening of America during the coronavirus pandemic, the show will go on.

Wisely, the NFL has taken baby steps toward some sort of normalcy. It has moved slowly in allowing a small number of team personnel to return to club facilities. It essentially has barred travel by team and league personnel, while able to remotely conduct the business of the sport: free agency, the draft, owners meetings.

The NFL's medical staff, in conjunction with health officials across the nation, has taken a safety-first approach that, so far, has served the league well.

“I think the basis of it is medical and what the medical community is telling us,” says Troy Vincent, the league's executive vice president of football operations. "We’ve got to get this right. And we are coming out of phase one and going into phase two, and we have to show the general public and the players that our protocols and our procedures, we can’t miss, we can’t fail.

“We are really taking a responsible approach on a daily basis; it is changing daily. I would say that was the route of why the pause, because we are still learning, and we must get it right.”

But the big questions are coming. From broadcast partners. From municipal governments and even higher. From sponsors. From players. From fans.

And yes, from within, particularly from some owners who, like it or not, are bottom-line guys.

As contingency plans are made for playing in empty stadiums, or pushing back the schedule — and the Super Bowl, perhaps even beyond February — or even for games at neutral sites, rest assured the NFL has no plans to not play.

Major League Baseball's season and staging the Stanley Cup playoffs remain uncertain endeavors, mired in either monetary discontent or logistical morasses. At least the NFL has had time on its side so far, but a Sept. 10 launch for the regular season isn't that far away.

The television networks couldn't be more invested in getting pro football onto their airwaves. Live sports programming is now being looked at almost as essential rather than simply as entertainment. That's where the NFL is king — and nothing else in sports comes close.

Same thing on local levels, where team radio deals are particularly lucrative, and advertisers reach a segmented audience they covet.

With much of the nation reopening businesses that benefit from the NFL playing in their communities, there will be increasing anxiety in those municipalities that those games occur.

Even if fans are barred or limited in stadiums, sports bars and restaurants that cater to the fans could be open, hopefully obeying social distancing protocols.

Those fans, and particularly the ones who engage in fantasy football or bet directly on games, figure to be the most supportive group of all to have the NFL stick to its plans as much as reasonably possible.

While players must insist on the healthiest environment for a return to practicing and, eventually, to playing, it's difficult to believe a vast majority of them even consider the possibility of no 2020 season. NFL careers are shorter than in any other team sport, and spending basically 20 months away from on-field action for so many could be devastating.

Not to mention the quality of football we'd be watching after such a hiatus.

Naturally, nobody is saying the NFL should put on blinders and proceed indiscriminately on schedule, something Vincent and his boss, Commissioner Roger Goodell, have made clear won't happen.

Again, the league has the benefit of the calendar — and the popularity of the league that would allow it to stretch games into next spring without a substantial loss of audience or attention.

Make no mistake, though. Call it support or call it pressure, it's coming for America's No. 1 sport.