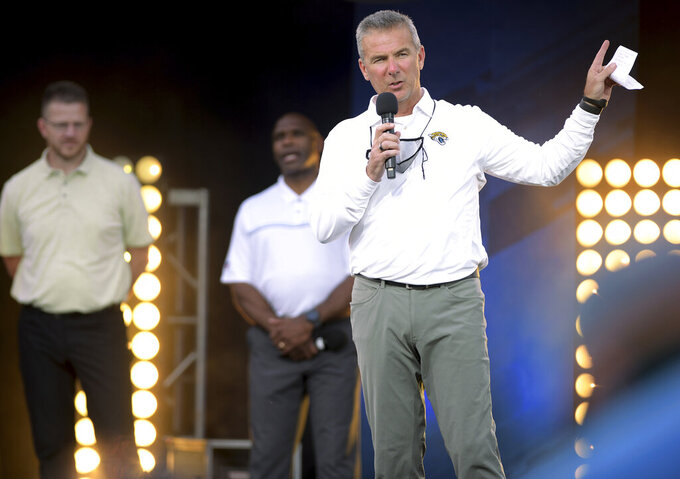 The Jacksonville Jaguars have fired four longtime scouting executives, including two who had been with the team more than two decades, a person familiar with the decision told The Associated Press on Wednesday.

The person said the Jaguars parted with Chris Driggers, Andy Dengler, Mark Ellenz and Paul Roell following the NFL draft. The person spoke on condition of anonymity because the moves were not publicly announced.

Driggers, Dengler, Ellenz and Roell had been with the Jags a combined 66 seasons. Each of them was either hired or promoted by former general manager Dave Caldwell, who was fired in November.

The team removed all four fired execs from its website Wednesday.

Driggers was the team's director of pro personnel since 2015. He had been one of six staff members who joined the franchise in 1994, shortly after its inception.

Dengler was the team's assistant director of player personnel since 2013. He first joined the Jags as a regional scout in 1998.

Ellenz was the team's director of college scouting since 2016. He joined the Jaguars as a regional scout in 2013. He started his NFL career as an assistant training camp coordinator with New Orleans in 1998.

Roell was the team's assistant director of college scouting since 2013. He joined the Jags that year after serving seven seasons as a regional scout with Minnesota. Roell started his NFL career as an area scout for Indianapolis in 1991.

The changes were somewhat expected under new coach Urban Meyer, who is revamping every aspect of the floundering franchise.

Meyer expanded the team's coaching staff, its strength and conditioning program, and its nutrition and training programs. He also is pushing to get a new football facility built; Jacksonville's current offices, meeting rooms and training rooms are housed in the bowels of the team's aging stadium.