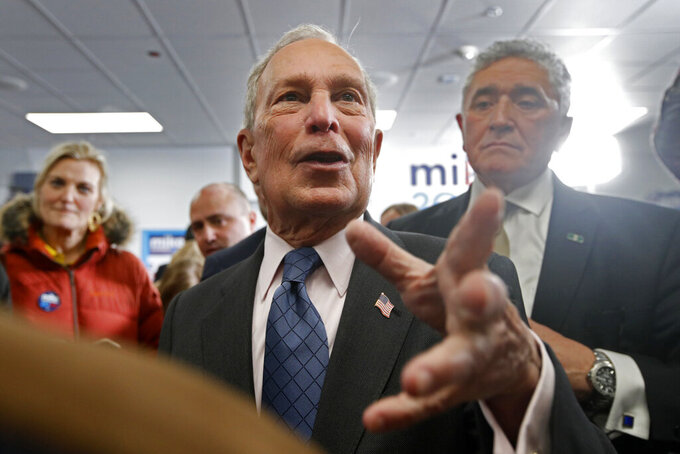 WASHINGTON (AP) — Democratic presidential candidate Michael Bloomberg will use his Super Bowl ad to highlight his efforts to combat gun violence, while President Donald Trump will focus on his economic record as the two candidates face off during the year's most-watched television event.

Trump and Bloomberg will broadcast dueling ads during Sunday's NFL championship game, with each campaign spending an estimated $10 million on 60 seconds of airtime.

Bloomberg's spot, instead of an attack ad as some had reported, will feature a grieving mother who lost her son to gun violence.

The focus underscores the former New York City mayor's efforts to contrast himself with Trump as he tries to build a national profile with a highly unconventional ad-driven campaign that is looking to get under the president's skin.

For Trump's campaign, the aim is to make the case that even if voters are turned off by the president's style, they are better off now under him they were four years ago.

Sunday's b roadcast comes just one day before Iowa's first-in-the-nation caucuses, though neither candidate is really competing. Trump has an ironclad hold on the Republican nomination, while Bloomberg is skipping the four early voting states to focus instead on Super Tuesday contests on March 3.

“America demanded change. And change is what we got," says the narrator, who states that, “Under President Trump, America is stronger, safer and more prosperous than ever before."

“Just as the Super Bowl crowns the greatest football team, nothing says ‘winning’ like President Donald Trump and his stellar record of accomplishment for all Americans,” Trump campaign manager Brad Parscale said in a statement. The campaign said its second ad won't be released before it airs.

Bloomberg's ad will air following the h alftime show. The ad features the story of Calandrian Simpson Kemp, a Texas mother whose 20-year-old son was fatally shot in 2013. George Kemp Jr. was a college football player who dreamed of one day playing in the NFL.

“Lives are being lost every day. It is a national crisis," the grieving mother says in the ad, which also highlights Bloomberg's record on the issue.

“When I heard Mike was stepping into the ring, I thought, ‘Now we have a dog in the fight,’" she says. “Mike’s fighting for every child. Because you have a right to live. No one has a right to take your hopes and dreams."

Bloomberg is a longtime backer of what he calls “common-sense" gun legislation and has spent hundreds of millions of dollars since his time as New York City mayor to combat gun violence, including founding Mayors Against Illegal Guns, which eventually merged with Moms Demand Action for Gun Sense in America.

In 2013, he founded Everytown for Gun Safety, which has worked to pass gun control legislation, and in 2018, he spent $110 million to elect candidates who support gun safety in the midterm elections.

Simpson Kemp told The Associated Press that she first met Bloomberg in 2015 and was drawn to him because he was proposing solutions.

“When you have lost a child — when you have actually opened the earth and put your child in a hole and closed it up — you don't have time to wait and play," she said Wednesday. “This is urgent. And I knew Mike Bloomberg had a plan and had a plan that we can get behind.”

She will be attending the game Sunday on a ticket Bloomberg gave her. “When I walk into that stadium and sit in that seat,” she said, she'll be able to “tell my son that he made it. Indirectly, he has made it.”

While an ad featuring a tearful mother might seem out of place alongside spots advertising beer and sedans, Bloomberg campaign spokeswoman Julie Wood said th e goal was to “make people take notice” and try to start a conversation about the issue during a rare day when so many Americans come together to watch something “and actually watch the ads and talk about the ads.”

“It's not about selling corn chips and beer. It is a serious ad about an issue that I think the country does care about and should care about," Bloomberg said in an appearance on “The Tonight Show Starring Jimmy Fallon” this week.

Bloomberg's decision to buy the Super Bowl time is just the latest in his tit for tat with Trump, whose campaign said it had been in talks with Fox, the network broadcasting the game, for months about an ad. It's apparently the first time a presidential campaign has purchased national Super Bowl time.

The candidates, who have been trading barbs since Bloomberg's late decision to enter the race, both have near-limitless money to spend. Trump’s campaign has set fundraising records, with $46 million raised in the last quarter of 2019 alone. Bloomberg, a billionaire who is self-funding his race, had already spent over $225 million on television and digital advertisements as of mid-January, according to the tracking firm Advertising Analytics.

During his late-night interview, Fallon remarked that Bloomberg seemed to be getting under Trump's skin with his nonstop television presence.

“Well, I sure hope so," Bloomberg responded. “I'm trying."

Catch up on the 2020 election campaign with AP experts on our weekly politics podcast, “Ground Game.”