Broncos kick off NFL training camps with Sanders on board 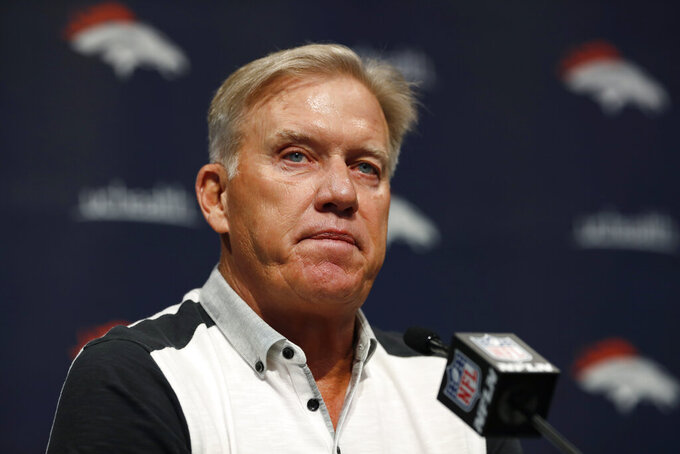 FILE - In this June 17, 2019 file photo John Elway, general manager of the Denver Broncos, speaks during a news conference at the NFL team's headquarters in Englewood, Colo. The Broncos are the first team in the NFL to kick off training camp Thursday, July 18, 2019 and they’ll do it with Emmanuel Sanders on hand and also Drew Lock. (AP Photo/David Zalubowski, file)

ENGLEWOOD, Colo. (AP) — The Denver Broncos are the first team in the NFL to kick off training camp Thursday, and they'll do it with Emmanuel Sanders on hand and also Drew Lock .

Sanders won't be full-go as he continues his comeback from a torn Achilles tendon last December, but "Emmanuel looks good. He's not going to go on PUP. He'll start practicing from Day 1," general manager John Elway said Wednesday. "Obviously we're going to work him in slowly."

Pro Bowl running back Phillip Lindsay , who hasn't taken a snap since suffering a wrist injury at Oakland on Christmas Eve, also will be eased into action.

"Lindsay's ready to go," new head coach Vic Fangio said. "Lindsay, Emmanuel, we'll ease them in, but we'll get them in quickly."

Rookies and veterans reported to UC Health Training Center on Wednesday, a week earlier than usual because of the Broncos' upcoming Hall of Fame game against Atlanta on Aug. 1.

Three other teams — the Cardinals, Seahawks and Ravens — also had rookies report Wednesday but their veterans get several more days of summer vacation, unlike the Broncos.

Lock agreed to terms Wednesday afternoon, avoiding a potential holdout. He is vying for the backup job behind newcomer Joe Flacco, whom Elway acquired from Baltimore in yet another offseason makeover.

Widely viewed as a first-round prospect, Lock slipped to the second round, where the Broncos selected him with the 42nd overall pick, one spot behind their new left guard Dalton Risner. Lock has to get used to playing under center after hardly doing so at Missouri.

After the Paxton Lynch fiasco, Elway views his QB situation now like the Chiefs did with Alex Smith and Patrick Mahomes two years ago, with the apprentice getting to take his time learning and the veteran preparing to be the starter.

Elway said he's optimistic because new offensive coordinator Rich Scangarello brings to Denver the roots of the Baltimore system in which Flacco excelled early in his career.

Also, "anytime you get traded midway in your career, two-thirds of the way through your career, you've got something to prove," Elway said.

Adding Flacco in a trade and Lock in the draft allows the Broncos "to solidify that position for a while," Elway said. "Obviously, we've been looking for one since Peyton (Manning) retired. That's always a difficult position to fill. But I finally feel good about that position and where we are."

The Broncos are coming off back-to-back losing seasons for the first time since 1971-72 and while they have another rookie head coach, Fangio is 61 and has decades of experience coaching in the pros.

"We've got a lot of work ahead of us," Elway said. "We always have high expectations of ourselves but we just know that the position that we're in and the last two seasons that we've had we've got to take it one day at a time and that's what we're going to do.

"And we're in good shape, too. I think being in early, having the extra week, playing in the Hall of Fame game is going to help us with the new staff. I think that's a positive for us being in early."

"I think it's good to have the fans out here," Fangio said. "You know, the history of the NFL, you had to go to college campuses back in the day because the facilities didn't look like this. When I first went to the Saints in the mid-80s, we had an 80-yard grass field, OK? We had no cafeteria.

"I think one of the things, small things, that has driven the NFL to being the most popular sport in the country is that you let people come and watch practice, people that maybe cannot afford to go to the game and maybe get an autograph from a player. Maybe a player shakes their hand and throws them a sweatband or a glove," Fangio added.

"You know, you do that with a young person, you've got a fan for life. And football has a fan for life. There's more to be gained out of that than any advertising slogan or any commercial that you put on TV."