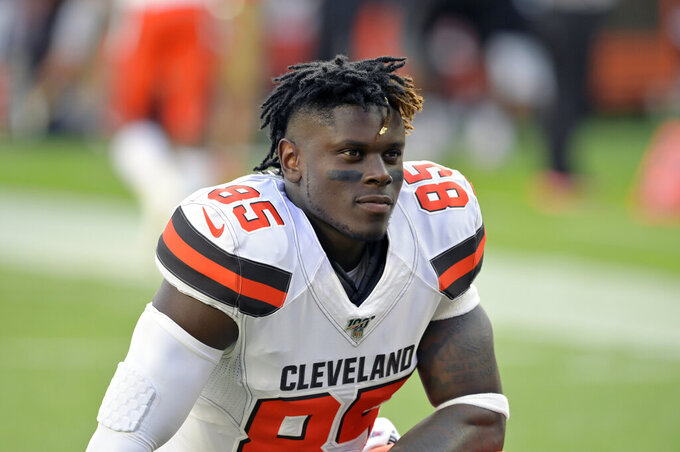 FILE - In this Aug. 8, 2019, file photo, Cleveland Browns tight end David Njoku kneels on the field before an NFL preseason football game against the Washington Redskins, in Cleveland. Njoku has returned to practice after missing eight games with a broken right wrist. Njoku was injured in Cleveland’s win over the New York Jets on Sept. 16. The Browns designated Njoku for return from injured reserve on Wednesday, Nov. 20, 2019. (AP Photo/David Richard, File)

Njoku was injured in Cleveland’s victory over the New York Jets on Sept. 16, when he landed awkwardly after getting his legs taken out while trying to make a leaping catch. The Browns designated Njoku for return from injured reserve on Wednesday. He’s eligible to play this Sunday against Miami, but coach Freddie Kitchens wants to assess Njoku on the practice field first.

In his third season out of Miami, Njoku has 92 career catches for 1,062 yards and nine touchdowns. Before he got hurt, Njoku had four catches for 37 yards and a TD this season.

His return gives quarterback Baker Mayfield another weapon as the Browns (4-6) try to stay in the playoff hunt.