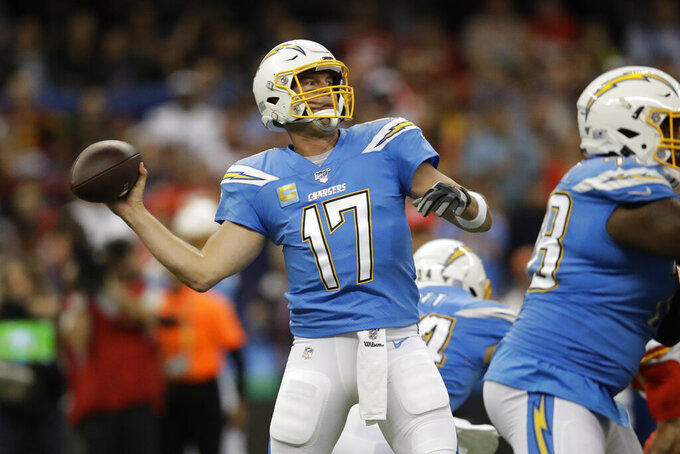 COSTA MESA, Calif. (AP) — Philip Rivers says he is concentrating on Sunday’s game instead of his future beyond this season.

Even though the Los Angeles Chargers quarterback is trying to maintain tunnel vision, he knows there are many out there who have been critical about his play in what has been a disappointing season.

“It’s been a tough stretch, really unlike any two games I have had,” Rivers said on Wednesday. “I don’t necessarily try to seek criticism out, but I’m also not naive to it or ignore it completely. I understand it. I know it comes with it.

“I’m disappointed that I haven’t made some of the plays that I need to. I’ve also made some plays that helped us be in these games, too. It goes both ways. I’m not trying to sell that I’ve played well. I have not played well. The turnovers are unacceptable, but there’s no lost confidence, no lost belief in myself.”

Rivers has thrown seven interceptions in the past two games and is second in the league with 14 this season. After losses to the Raiders and Chiefs, the Chargers continue their run of division games by traveling to Denver.

Even though Los Angeles isn’t mathematically eliminated at 4-7, it needs to win out and get some help to entertain any hopes of returning to the playoffs. While there remain plenty of questions about Rivers’ future with the franchise he has played for his entire 17-year career, he is one of the few not discussing it.

“I think it is something to look at when the finality of being knocked out comes but right now we’re just fighting to play better. That is where the focus is for me now instead of the big picture,” Rivers said.

Rivers attributed the spike in interceptions to both poor throws and decisions. The 14 picks are the most he has thrown at this point of the season since 2012.

The interceptions are a big reason why the Chargers go into Sunday’s game with the fifth-worst turnover differential in the league at minus-9. Los Angeles’ 15 turnovers since Week 5 are tied for second most.

Besides the interceptions, Rivers has not fared well over the past three games on third down and when under pressure.

One of the more frustrating games for Rivers and the Chargers came against the Broncos on Oct. 6. He threw a pair of interceptions during the 20-13 loss and ended a 55-game streak where he directed a touchdown drive. It also marked only the ninth time in 230 regular-season and postseason starts that the offense did not reach the end zone.

Two of Los Angeles’ five turnovers in goal-to-go situations came in that game — Rivers’ interception in the end zone and Austin Ekeler’s fumble at the goal line.

Besides turnovers, a pivotal reason why the Chargers did not score an offensive touchdown was that Denver’s secondary took away the intermediate and deep routes. Rivers was forced to throw short, which is why Ekeler had 15 receptions.

Tight end Hunter Henry did not play because of a knee injury but has provided a spark since returning with 35 receptions for 427 yards in the past six games.

Coach Anthony Lynn said that Rivers understands he can’t keep committing turnovers but also refused to say if his patience in Rivers is running thin.

“Most great athletes, they respond well. I believe Philip is going to respond well,” Lynn said.