Chiefs expect Brady-led Buccaneers to be at their best 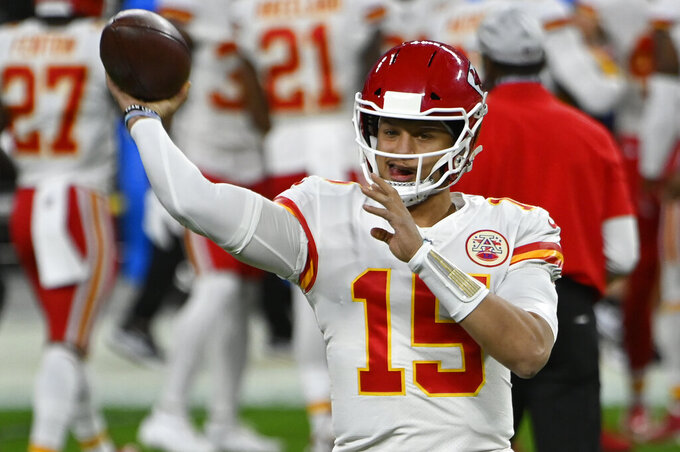 TAMPA, Fla. (AP) — The Kansas City Chiefs aren’t buying all the talk about Tom Brady’s struggles. They insist he’s still playing at a high level and will have to be at their best to beat the Tampa Bay Buccaneers.

The reigning Super Bowl champions (9-1) visit the Bucs (7-4) on Sunday, with Patrick Mahomes facing Brady for the fourth time in his young career and Brady looking to shrug off a couple of subpar performances against playoff contenders.

“You can’t take anything away from Tom Brady. He’s still very smart, he’s still trying to throw the ball downfield, he still has the weapons. We’ll have our hands full,” Chiefs safety Tyrann Mathieu said.

“He’s played against our system a number of times, even going back to New England,” Mathieu added. “He’s familiar with us. Now we have to get familiar with him and the weapons he has.”

Brady won two of the previous three matchups against Mahomes, including an overtime thriller in the AFC championship game two seasons ago.

The six-time Super Bowl champion played poorly in home losses to New Orleans and the Los Angeles Rams two of the past three weeks. Still, Kansas City coach Andy Reid cautioned against anyone writing off the 43-year-old quarterback.

Despite Brady’s recent struggles, particularly on deep passes, the Bucs have already matched their victory total from all of last season and remain in prime position to end a 12-year playoff drought that’s the second longest in the NFL.

“He’s unbelievable. He’s a great player, a Hall of Fame player. We’re lucky enough to have a chance to be in this era where we get to play him,” Reid said.

“He’s old, and it’s hard to tell he’s old,” Reid added. “And that’s a tribute to how he takes care of himself, and the care and living he does all the way around, from diet to workout to everything.”

The Chiefs have won five straight, the eighth consecutive year they’ve had a streak at least that long.

They avenged their lone loss last week a 35-31 victory at Las Vegas, with Mahomes throwing for 348 yards and two TDs.

Mahomes, who’s thrown for just over 312 yards per game with 14 TDs and one interception during Kansas City’s winning streak, was as surprised as anyone that Brady left the Patriots to sign with Tampa Bay in free agency last March.

“But he’s in a great spot. They’ve got a lot of weapons there,” Mahomes said, looking ahead to another head-to-head meeting.

Brady threw a pair of costly interceptions and was 0 for 6 on passes traveling at least 20 yards in last week’s 27-24 loss to the Rams. He’s 0 for 19 on such throws over the past three games, which includes a 38-3 loss to the Saints.

The struggles have raised questions about whether the offense Brady is being asked to run following a historic 20-year stint with the Patriots is suited to what he does best.

Bucs coach Bruce Arians concedes the offense has been inconsistent, but attributes that to a lack of continuity caused in part by teams not having a usual offseason due to the coronavirus pandemic and injuries that have forced lineup changes and limited practice time for some players.

“He can do anything, so it’s not like he can’t do it,” Arians said, responding to critics who suggest the problem is the offensive scheme, which stresses pushing the ball downfield.

“Each and every week is so different, but when they’re there, we need to hit them,” the coach added. “We can’t have them going off our fingertips, and we can’t overthrow them.”

Brady has lots of good things to say about Mahomes and the Chiefs, who lead the league in scoring at 32.1 points per game.

The Chiefs should be welcoming back wide receiver Sammy Watkins from a hamstring injury that has sidelined him since Week 5 just in time.

They lost Byron Pringle, who had been one of the bright spots in their wideout corps this season, to an ankle injury last week that landed him on injured reserve. Their only other healthy wide receivers on the 53-man roster are Tyreek Hill, Demarcus Robinson and Mecole Hardman.

The Chiefs have won the past two weeks despite allowing 31 points each to Carolina and Las Vegas. The Panthers threw for 331 yards while running for 104 during their game at Arrowhead Stadium before the bye week, and Derek Carr led the Raiders to 364 yards of total offense — and if not for a touchdown in the closing seconds, a win — last Sunday.

Arians rejects the notion that some of Tampa Bay’s problems on offense are related to having too many playmakers on the roster. With their only being one ball, how could Brady possibly keep Mike Evans, Chris Godwin, Ronald Jones, Rob Gronkowski, Antonio Brown, Leonard Fournette and LeSean McCoy happy?