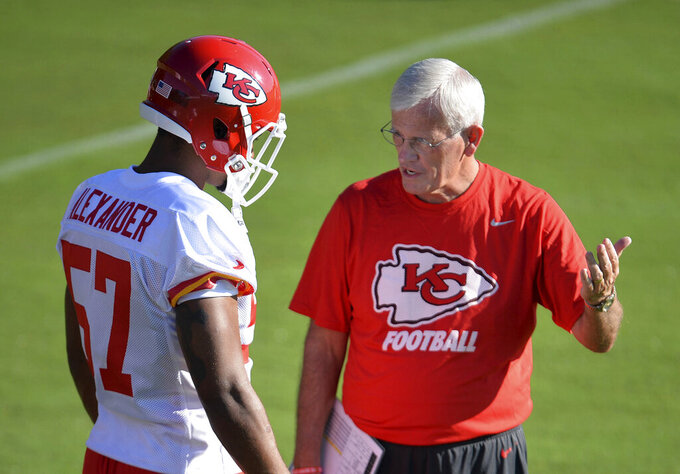 File-This July 30, 2015, file photo shows Kansas City Chiefs then rookie linebacker D. J. Alexandra (57) talking with Chiefs defensive coordinator Bob Sutton during an NFL football training camp practice in St. Joseph, Mo. The Chiefs have fired Sutton after a second-half collapse in the AFC championship game, including an overtime period in which Kansas City failed to stop the New England Patriots on what turned out to be the only possession. The Patriots won the game 37-31 to reach their third consecutive Super Bowl. Chiefs coach Andy Reid announced the firing in a statement Tuesday, Jan. 22, 2019, one day after he said he was evaluating all aspects of the team. Reid declined to address Sutton specifically. (Andrew Carpenean/The St. Joseph News-Press via AP, File)

KANSAS CITY, Mo. (AP) — The Chiefs fired defensive coordinator Bob Sutton on Tuesday, just two days after Kansas City failed to stop Tom Brady and the New England Patriots on what turned out to be the only possession of overtime in a crushing 37-31 playoff defeat.

Chiefs coach Andy Reid announced the firing in a brief statement. It came one day after he said he would evaluate all aspects of the team but declined to address Sutton's future specifically.

"Bob is a good football coach and a great person. He played an integral role in the success of our team over the last six seasons," Reid said. "I've said before that change can be a good thing for both parties, and I believe that is the case here for the Chiefs and Bob."

His defenses performed reasonably well the first few seasons in Kansas City, but the bend-but-don't-break approach began to grow stale. The Chiefs struggled to stop anybody last season, and many fans called for Sutton to be replaced then, only for Reid to give him another chance.

Despite investing heavily in the defense, both through free agency and the draft, the unit fared even worse this season. Kansas City allowed 405.5 yards per game, better only than Cincinnati, and was the ninth-worst scoring defense in the league. The Chiefs were especially poor against the run, and it showed in Sony Michel's success against them in the AFC championship game.

Michel ran for 113 yards and two touchdowns, while Brady threw for 348 yards and another score, as the Patriots dominated time of possession and piled up 524 yards.

That includes 75 yards in overtime, when the Patriots won the coin toss and marched downfield for the winning touchdown. All-Pro quarterback Patrick Mahomes and the Chiefs offense, which led the NFL in scoring this season, never got an opportunity with the ball in overtime.

Even more damning to Sutton was the call by CBS analyst Tony Romo on the TV broadcast. Romo was uncanny in predicting exactly what New England would do, yet the Chiefs were unable to stop it.

"We wanted to do better there," Reid said during his end-of-season news conference Monday. "When it comes down to the last drive, you magnify where it is, but this was the championship game. It was in overtime. When you really cut to the chase of it here, the few games we lost, we lost by minimal points, so we were obviously doing something right."

Yet the Chiefs allowed an average of 37.6 points during their four regular-season losses and their playoff defeat. And while they were among the best in the league at rushing the quarterback this season, they failed to sack Brady during the AFC championship game.

"I put this on the defense," Chiefs defensive tackle Chris Jones said afterward. "We've got to build from it, learn from it and we'll be better next year."

Reid did not indicate who his new defensive coordinator might be, though there are unsubstantiated reports Tuesday that there was mutual interest with longtime NFL coach Rex Ryan. Reid could also promote from within his own staff, something he has chosen to do often with offensive coordinators.

The job should be attractive on a number of levels.

The Chiefs have several building blocks in place, including Jones and pass rushers Dee Ford and Justin Houston, and are poised to invest even more in the defense this offseason. They have three draft picks in the first two rounds, giving them a chance to plug up some of their biggest holes.

They are also well-positioned to compete for championships for years to come with Mahomes entering his third season and a bevy of playmakers around him, such as Travis Kelce and Tyreek Hill.