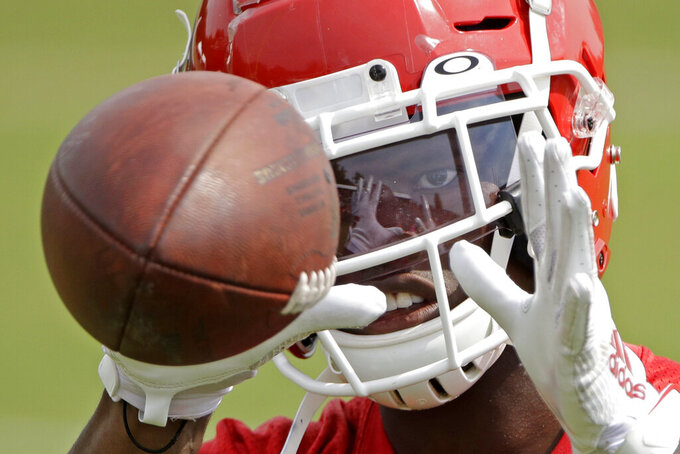 KANSAS CITY, Mo. (AP) — Every team in the NFL passed on Darwin Thompson multiple times during the draft, leaving the soft-spoken running back waiting for a phone call when the Chiefs were on the clock in the sixth round.

It's worked out well for both of them.

Thompson was taken by a team willing to overlook his stature (5-foot-8) and alma mater (Utah State) by giving him a chance. The Chiefs were able to add some depth at running back, a position of significant need, without using a higher draft selection on a more proven commodity.

Now, the Oklahoma native is making a push up the depth chart, nipping at the heels of Carlos Hyde and Darrell Williams for the backup job behind incumbent starter Damien Williams.

"I'll tell you what, he's doing a nice job," Chiefs coach Andy Reid said. "He's able to see the blitz, which is a big thing for young guys. He has good vision in the run game. Then, he has a pretty good understanding of the pass game. He's a really focused kid. He's kind of a non-nonsense guy. He wants to do it right, is real focused, studies a lot. I like the way he's made up that way."

Reid is understandably interested in the way Thompson handles everything but carrying the ball. A successful running back in his offense has to protect quarterback Patrick Mahomes, a major question mark for the undersized Thompson, and catch passes in what has become a wide-open West Coast system.

Then there's the film room, often one of the biggest stumbling blocks from college to the NFL.

"You just want to see how they handle the stress of preparing, playing and performing every day," Chiefs offensive coordinator Eric Bieniemy said. "I'm not shocked and surprised. We knew what we saw on tape. The kid did one heck of a job. Now, the kid still needs to continue to work on some things."

The part that needs the least work? Running the ball.

Thompson, whose uncle David Thompson played for the Rams from 1997-99, starred in junior college at Northeastern Oklahoma A&M before transferring to Utah State. He wound up running for 1,044 yards with 14 touchdowns last season, averaging a stunning 6.8 yards per carry in the Mountain West.

He did it all with an infectious smile, too.

"Man, 'D-Train,' that's my dog. He's a quiet assassin, that's what I call him," Damien Williams said. "Very quiet but when he cuts and gets up field, it's like he's my size."

The Chiefs love the fact that Thompson gives them another unique ball-carrier in the backfield, a complement to the do-it-all Damien Williams and power backs in Hyde and Darrel Williams.

"Darwin you would think is a smaller, jitterbug-type of guy," Chiefs running backs coach Deland McCullough said, "but he's strong and packs a punch. He can protect. He can run routes. He can run the ball. I feel really happy with what we have there."

Damien Williams missed some time earlier in camp with a hamstring injury, giving Thompson and the rest of the backups more run with the first-team offense. And not only did Thompson make the most of the reps, he carried that momentum in the Chiefs' first couple of preseason games.

He carried five times for 22 yards against Cincinnati, then had four carries for 30 yards last week in Pittsburgh — showing a couple of nifty moves and some unexpected breakaway speed.

"This is everything I worked for," Thompson said. "Nothing before this really matters now, this is just the beginning. This is the beginning of the journey. It's a new identity I can create. They are only going to remember me now from what I did in the NFL, not so much of what I did in college.

"I only played one year of D-I football," Thompson added. "My name before this really didn't mean anything. I get the chance to prove myself and my worth at this level."