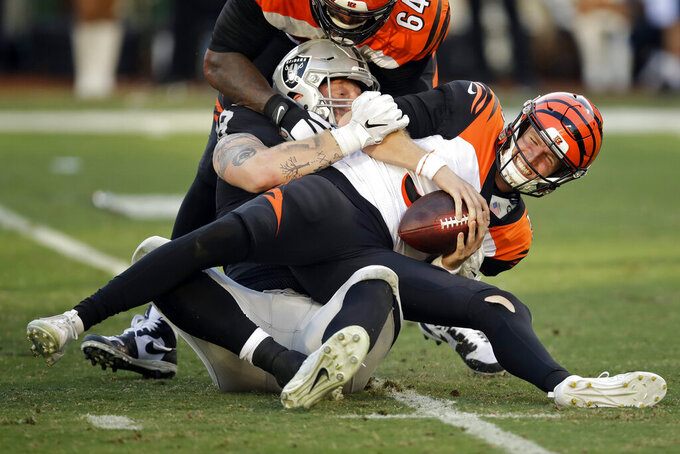 OAKLAND, Calif. (AP) — For a little while, at least, it seemed as if Cincinnati would finally join the rest of the NFL and win a game.

Joe Mixon ran strong for a second consecutive week, and the Bengals forced a pair of turnovers to cool down Oakland’s offense. But, reality sank in when rookie Ryan Finley dropped back to pass.

Finley was sacked five times, including four by Raiders rookie defensive end Maxx Crosby, and threw an interception that ended Cincinnati’s hopes for a late comeback during a 17-10 loss to Oakland on Sunday.

That’s 12 consecutive losses for the Bengals dating to last year. Cincinnati’s 0-10 start this season matches the worst in franchise history.

“I’ve got be better,” said Finley after his second career start in place of benched starter Andy Dalton. “A lot of these NFL games come down to one score, and you need to score in the two-minute situation. Just got to be better all around.”

Cincinnati led 7-0 behind Mixon’s running early. The Bengals running back had a 30-yard run to start the drive, then scored on a 3-yard run after changing directions in the backfield.

It was Cincinnati’s first rushing touchdown this season by someone other than Dalton.

Mixon had 47 yards on seven carries in the first half, but became a non-factor when the Raiders geared up to stop the run and the Bengals fell behind.

“Eventually, they stared zeroing in on the run, and you’ve got to try and stay one step ahead,” Cincinnati coach Zac Taylor said. “We felt like there were some opportunities there in the pass game, play-actions, to complement our run. Sometimes it went accordingly and sometimes it didn’t. But our run game was really helping us today.”

Mixon finished with 86 yards and 15 carries.

Finley struggled for a second straight week since replacing Dalton. The rookie quarterback was 13 of 31 for 115 yards and a 39.0 rating.

“Overall, offensively it wasn’t enough,” Taylor said, adding that Finley will remain the Bengals’ starter. “He tried to keep some plays alive, but it’s hard. Right now, we are not creating a lot of separation and there are some guys that get in (our) backfield pretty quick. So, it’s a hard day for most quarterbacks.

“There are some plays that he has got to learn from and he would like to have back, but it’s the whole unit together and that starts with him.”

In two games as Cincinnati’s starter, Finley has completed 29 of 61 pass attempts for 282 yards with one touchdown and two interceptions.

The Bengals had a frightening moment in the fourth quarter when wide receiver Auden Tate suffered a neck injury after making a 20-yard catch on a third-and-19 play. Tate had his back turned to the defense and was hit from behind by Raiders safety Curtis Riley.

Tate lay on the turf for several minutes and players from both teams knelt down nearby before Tate was eventually placed on a cart and taken to the locker room.

“He could talk and (had) motion and all that,” Taylor said. “Hopefully it was just mostly precautionary. When something like that happens to him, it’s hard. It affects us.”

If there was a positive, it came from the Bengals defense. Cincinnati sacked Oakland’s Derek Carr three times. Carr had been sacked only 12 times in the Raiders previous nine games.

Still, it wasn’t enough to take away the sting from being 0-10.

“It’s a big hit on everybody in the organization,” Mixon said. “It sucks to be in this position. I’ve never been 0-10 in my life. It’s the same thing each and every week, and it’s frustrating.”