Improvement, not praise on Newton's mind with Raiders next 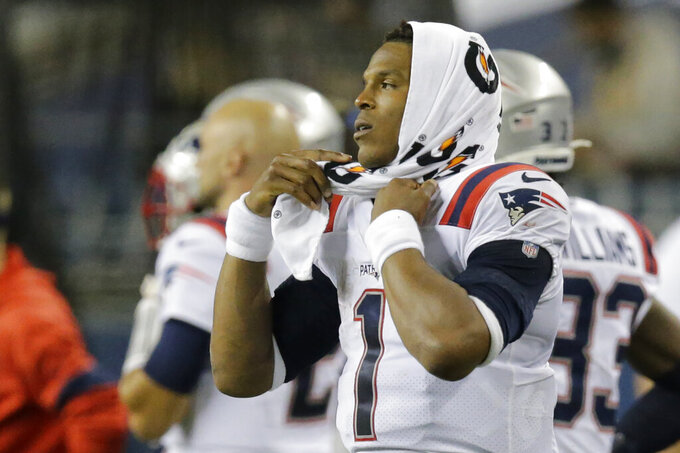 New England Patriots quarterback Cam Newton (1) reacts on the sideline during the fourth quarter of an NFL football game against the Seattle Seahawks, Sunday, Sept. 20, 2020, in Seattle. The Seahawks won 35-30. (AP Photo/John Froschauer)

FOXBOROUGH, Mass. (AP) — The past few days have gone exactly as Cam Newton expected them to inside the Patriots' team facility after his first loss as New England's starting quarterback.

Though he insisted there was no subliminal message in him wearing a “happily miserable” T-shirt during his video conference with reporters, it's clear Newton is quickly embracing a culture in which only winning is worthy of praise for a franchise with six Lombardi Trophies.

“We’re in Week 2. This is the NFL. We’re 1-1. I wouldn’t be overly jolly about our record or where we stand right now. That’s just honest," he said.

Still, while there were a lot of questions surrounding the Patriots' prospects this season following the departure of Tom Brady, Newton's play over the first two games have quickly raised those expectations,

In New England's season-opening win over Miami, Newton primarily relied on his rushing ability to carry the offense. He did it with his arm in last week's loss at Seattle, throwing for 397 yards and coming within a yard of a victory and a 2-0 start. For the season, he's completing 71 percent of his passes.

But it is wins, not praise that Newton insists is on his mind as the Patriots prepare to host the Las Vegas Raiders on Sunday.

What’s he’s not concerned about right now is the future and whether the Patriots can be his long-term home after this season.

“My focus is short term, and that has a lot to do with the Las Vegas Raiders, and I understand where we’re trying to go and understand the questions you’re asking, but I’m going to say it again, that’s not my focus,” said Newton, who is playing under an incentive-heavy one-year deal with a base salary of $1.05 million.

“For me right now it’s all about winning. Let’s get back to that. We got too many people worried about chasing the (money) bag. If you do what you’re supposed to do, everything will take care of itself.”

New England coach Bill Belichick, the man who will eventually make the decision about Newton's Patriots future, said he's been impressed by how he has managed the offense so far

“Each week’s a new challenge, but Cam understands what we want to do,” Belichick said. “He has a good grasp. He’s got a lot of playing experience and is a very instinctive player, and when things come up in the game, he’s very quick to identify the differences from what we’ve prepared for and or what the team has shown in the past based on the last two weeks. But, we’ll continue to work together on that.”

Newton's primary option in the Seattle loss was Julian Edelman, who caught 11 passes for a career-high 179 yards. The pair linked up for several long plays, including a 49-yard play in the third quarter to set up a touchdown. For the game, Edelman averaged 22.4 yards per catch.

Newton said the deep passes were less by design and more about what the defense gave him. But he's open to going to the air more going forward.