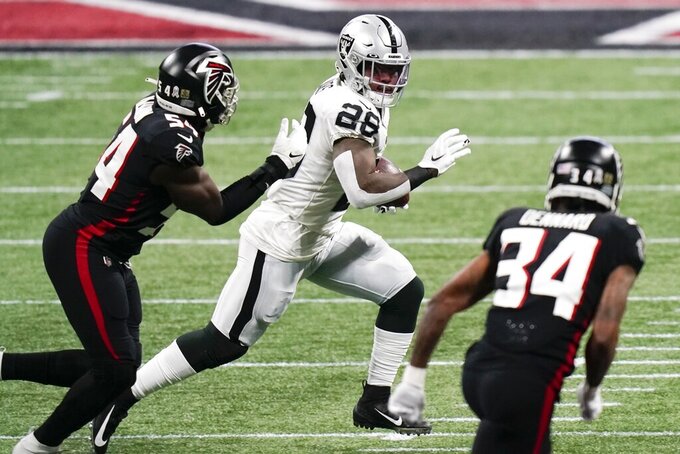 Las Vegas Raiders running back Josh Jacobs (28) runs against the Atlanta Falcons during the first half of an NFL football game, Sunday, Nov. 29, 2020, in Atlanta. (AP Photo/Brynn Anderson)

Coach Jon Gruden said the three practiced Friday and he will have a better gauge on their status when he sees how they feel Saturday.

Jacobs missed last week’s game with an ankle injury, Brown has been out the past seven games since testing positive for the coronavirus and Abram sat out last week with an injured knee.

The Raiders hope the possible return of Jacobs and Brown will help spark a running game which has been held to less than 90 yards rushing in three straight games for the first time in three years.

“It always helps to have your feature back in action,” Gruden said. “They don’t make a lot of guys like Josh Jacobs, so hopefully he’s ready to go and if he is, we’ll make sure we hand him the ball. But he’s a great back and normally a great back makes great things happen, and that’s what we need from our go-to guy.”

While Abram’s status is in question, the Raiders will be missing two key pieces in the secondary because of concussions. Rookie cornerback Damon Arnette has been ruled out of the game after suffering a concussion for the second straight game last week against the Jets and safety Jeff Heath is also out after getting hurt last week.

That could leave Erik Harris and Dallin Leavitt as the only healthy safeties, although slot cornerback Lamarcus Joyner and backup cornerback Isaiah Johnson also could play there if needed.

“We’re running out of safeties,” Gruden said. “Hopefully, Abram can play and stay healthy. Something he hasn’t done. We need him to do that to be the player that we need him to be. ... We’ll have a contingency plan, but right now we are getting tired of contingency plans to be honest with you. We’ve had a lot of defensive players go down, especially in the secondary and we’ll use the next-man-up as they all say but Leavitt is a guy we’ll be prepared to go to quick.”

Gruden also said that Marcus Mariota will serve as the backup quarterback for a second straight week after being inactive or injured the first 11 games.

The Raiders gave Mariota a $7.5 million guaranteed contract this offseason to back up Derek Carr. But the 2015 No. 2 overall pick in Tennessee struggled in training camp, began the season on injured reserve with a pectoral injury and then came back as a third-stringer behind Nathan Peterman before getting elevated to the No. 2 role last week.