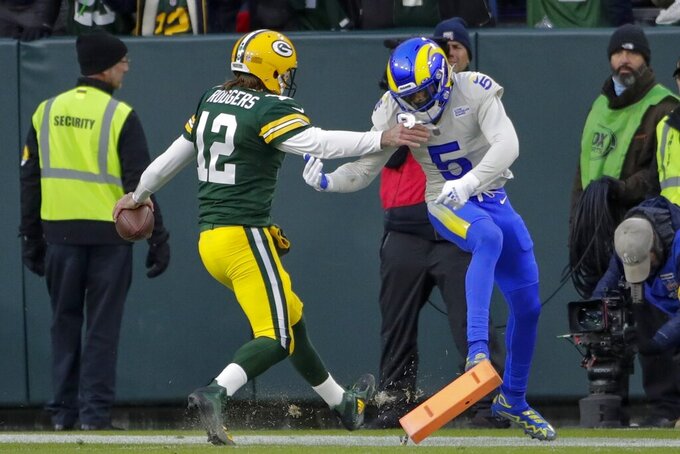 And when they face Ramsey on Sunday for the first time since dealing the Pro Bowl cornerback to the Los Angeles Rams early in the 2019 season, it will be a stark reminder of another talented player the small-market franchise let slip away.

Ramsey, running back Leonard Fournette, receiver Allen Robinson, safety Ronnie Harrison and pass rushers Yannick Ngakoue and Dante Fowler are the most notable players Jacksonville drafted in recent years and either traded or let walk. All of them have been productive elsewhere.

Those head-scratching decisions have contributed to Jacksonville dropping 30 of its last 35 games, including a 21-14 loss to Atlanta on Sunday. The Jaguars (2-9) are now assured of their fourth consecutive losing season and 10th in the last 11 years.

“I don’t want to be a part of it,” standout pass rusher Josh Allen said. “I hate losing. It’s just something that we have to change, man. Something that we’re going to change. If not now, it’s tomorrow, next week, whenever. We’ve all got to figure this stuff out, players and coaches and all. We’ve got to figure it out soon because we can’t keep doing this. Tired of it. We all are.”

Jacksonville’s path to becoming an AFC contender again includes drafting the right guys and keeping them beyond their rookie contracts. The Jags have re-signed eight draft picks – and just one first-rounder (quarterback Blake Bortles) – during Shad Khan’s decade of ownership.

Losing Ramsey has been arguably the biggest indictment of the floundering franchise.

Ramsey, who was admittedly upset he wasn't offered a long-term contract following his third season, got into a heated exchange with coach Doug Marrone on the sideline at Houston in Week 2 of 2019. Ramsey then felt disrespected during a post-game meeting with Marrone, then-general manager Dave Caldwell, then-personnel chief Tom Coughlin and Shad and Tony Khan. Ramsey’s agent requested a trade a short time later.

Ramsey played one more game for Jacksonville before sitting out three weeks while seemingly faking a back injury in hopes of forcing a trade. It worked.

Chaisson has two sacks in 27 games. Etienne is out for the season following foot surgery. And Smith has been inactive every game this season. Ramsey, meanwhile, has missed just two games with the Rams and continues to be one of the top cover guys in the league.

The Jaguars were a season-best 9 of-16 on third downs against the Falcons, considerable progress for a team that had been ranked last in the league on third downs. Being able to run the ball – James Robinson carried 17 times for 86 yards – helped Jacksonville avoid many third-and-long situations.

Special teams remain a concern. The Jaguars committed two penalties on special teams on the same drive in the second quarter, allowing Atlanta to turn a punt into a new set of downs and a field goal into a touchdown.

Lerentee McCray was flagged for a neutral-zone infraction on a fourth-and-2 punt, and Roy Robertson-Harris was penalized for leverage – he put a hand on the center as he tried to block a field goal. The Falcons took the points off the board and scored a touchdown.

Tight end James O’Shaughnessy caught three passes for 29 yards in his first action since a Week 2 ankle injury. O’Shaughnessy will be counted on even more now that Dan Arnold is likely out for the season with a sprained knee ligament.

The Jaguars are still looking to find an identity with their passing game. Coach Urban Meyer said Monday it’s a combination of having a rookie quarterback (Trevor Lawrence) and a revolving door at receiver after losing DJ Chark and Jamal Agnew. Drops have been an issue all season.

“If you can’t throw and catch, you’ve got to find guys that can,” Meyer said.

Arnold is headed to IR. CB Shaquill Griffin (concussion) should return against the Rams after missing Sunday’s game.

15 – consecutive games Jacksonville has lost to NFC teams. The Jags are 0-4 against the other conference this season. Their last victory against an NFC team came in the 2018 season opener at the New York Giants.

The Jaguars get another chance to end their NFC skid at the Rams.

“You’re facing an all-star team on the road,” Meyer said. “I haven’t studied them yet, but I’ve seen enough to know what we’re getting into.”