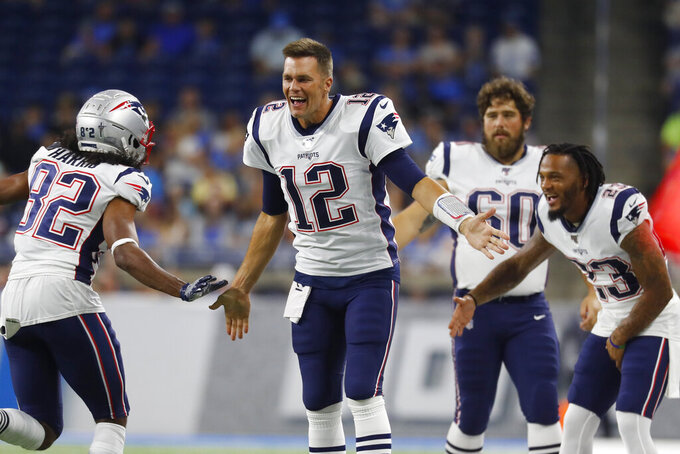 DETROIT (AP) — If Jakobi Meyers wanted to, he could probably use his status as an undrafted rookie as motivation.

Not need for that, the New England receiver says. The Patriots gave him an opportunity, and that's who he needs to impress.

"I have to keep proving to my coaches that I deserve to be here," Meyers said. "I'm not on the team yet. I'm trying to make sure I can stay here and continue to be here. That's who I'm trying to prove a point to, not really to people who didn't give me the call."

Tom Brady and Matthew Stafford didn't play, and plenty of other key players were also spectators, but Meyers stood out for New England. He caught scoring passes from Brian Hoyer and Jarrett Stidham in the second quarter and finished with six catches for 69 yards.

Super Bowl MVP Julian Edelman (thumb) has been sidelined for the Patriots, and Phillip Dorsett is the only other returning receiver. Meyers seems to be taking advantage of his opportunity so far.

"I was getting a lot of texts about, 'Oh I heard you were doing great in practice,'" Meyers said. "It doesn't mean anything because we didn't have a game yet. So just the fact that I can go out there and show that I deserve to be here, for now, I'm just trying to keep pushing forward."

At the end of the third quarter, the Lions had only 41 net yards — and minus-11 passing.

Hoyer went 12 of 14 for 147 yards and two touchdowns. His 14-yard strike to Maurice Harris made it 7-0 in the first quarter. Meyers then caught a 3-yard TD from Hoyer and a 5-yarder from Stidham.

"I thought our overall passing game was pretty efficient," Patriots coach Bill Belichick said. "Quarterbacks got the ball out on time. Receivers caught the ball. We protected fairly well."

Nick Brossette scored on a 1-yard run in the third quarter.

Lions coach Matt Patricia has been moving around on a vehicle at practice while recovering from surgery on his left leg. He did coach this game from the sideline, perched a few feet above the ground behind a handful of coolers near midfield, a safe distance from the field.

"Definitely different, from that perspective for me to be kind of a little bit away from everything. I could see. My biggest goal was to try to see over everybody and see the field. I actually could see a lot on the field, which was good," Patricia said. "It's probably the best I could do. I can't get too close to the action because certainly don't want to put anybody in danger and I can't really get out of the way myself right now."

The nadir for the Lions may have come late in the second quarter, when David Fales was sacked on back-to-back plays, bringing up third-and-33. Then Detroit ran the ball and received a holding penalty that was declined.

One of the first times the Detroit crowd really cheered much was after a sack by New England's Chase Winovich, who played college football at Michigan. Winovich had 1½ sacks.

Lions: Shortly after Kearse's injury, QB Tom Savage appeared to be shaken up. He was able to walk off but did not return. ... DT Darius Kilgo was helped off in the second quarter.

Patriots: at Tennessee on Aug. 17.