'Joey Franchise' is toast of Cincinnati as Bengals advance 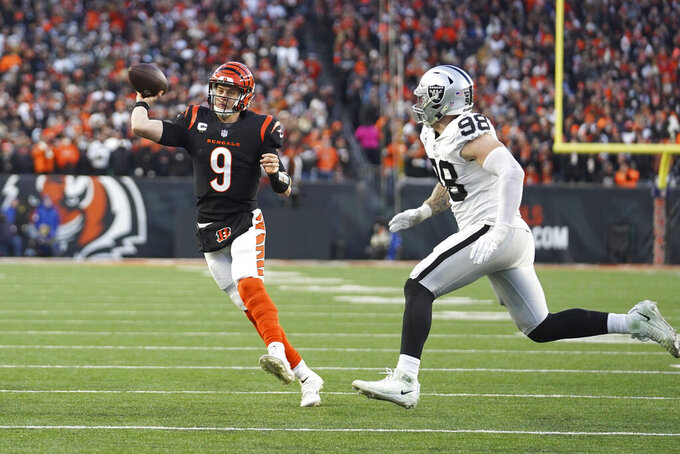 CINCINNATI (AP) — The Bengals won a playoff game for the first time in three decades in the wild-card round, however it was difficult to tell by looking at Joe Burrow sitting at the podium afterward behind rose-colored Cartier shades.

“I mean it's exciting, but this was expected,” the Cincinnati quarterback shrugged after the 26-19 win over the Las Vegas Raiders last week. “This isn't like the icing on top of the cake or anything — this is the cake. So we're moving on.”

“Joey Franchise” will now try to get the Bengals (11-7) over another hump as they seek their first road playoff win in team history Saturday at Nashville against the Tennessee Titans (12-5).

Cincinnati is 0-7 on the road in the postseason going back to 1970.

Regardless of what happens, it's difficult to overstate Burrow's value to the organization. He's turned out to be the combination of confidence, work ethic, leadership and guts the downtrodden Bengals sought when they drafted him first overall in 2020.

“We trust in Joe,” coach Zac Taylor said. “The more I’ve been around, I’ve learned to just shut my mouth and let the magic occur.”

A single astounding play from Cincinnati's win over the Raiders showed Burrow's keen ability to see the field and calculate risk vs. reward in the blink of an eye.

Late in the first half, the Bengals had a third-and-4 from the Raiders 10. Burrow took a shotgun snap, stepped forward as the pocket collapsed and then scrambled right with defensive tackle Quinton Jefferson on his tail.

With no receivers open, he might have run out of bounds or thrown it away so Evan McPherson could come on for a chip-shot field goal.

But at the 11-yard line, Burrow pushed off with his right foot into the air and released the ball a split-second before his momentum carried him out of bounds. Tyler Boyd made the catch at the back of the end zone.

The Raiders argued that the official on the sideline thought Burrow went out of bounds and blew the play dead. After a replay, the touchdown was allowed to stand, and the Bengals were up by two scores.

In Joe we trust.

“Plays like that, you can’t explain,” Taylor said. “It’s making a play when there’s no play to be made."

Tennessee coach Mike Vrabel can see for himself.

“(He) just has a really good feel for making all of the throws," Vrabel said. “He is very elusive in the pocket. He takes care of the football. They do a lot with him. He is operating from the line of scrimmage sometimes and getting them into the right call.”

Burrow won the 2019 Heisman Trophy and national championship at LSU. He flashed potential in 2020 before tearing up his left knee in the 10th game of Cincinnati's dismal 4-11-1 season. He had surgery and spent the spring and summer rehabbing.

He still wasn't back to 100 percent as the season began. But as his knee got better, Burrow got better. He shattered franchise records and re-established chemistry with former LSU teammate Ja'Marr Chase, the Bengals' first-round pick in 2021 who also broke team receiving records on the way to becoming a contender for Offensive Rookie of the Year.

“He’s playing tremendous football,” Chase said. “I don’t think he’s playing any different from when he was playing in 2019 (at LSU). He’s just getting smarter as he goes on.”

“I think the fans were excited, but I try to downplay it and all that because this is how it’s going to be from here on out,” Burrow said Tuesday.

“It’s a great win for us, but this is the standard, the bare minimum every year going forward.”