For McCourty twins, Christmas is about family again 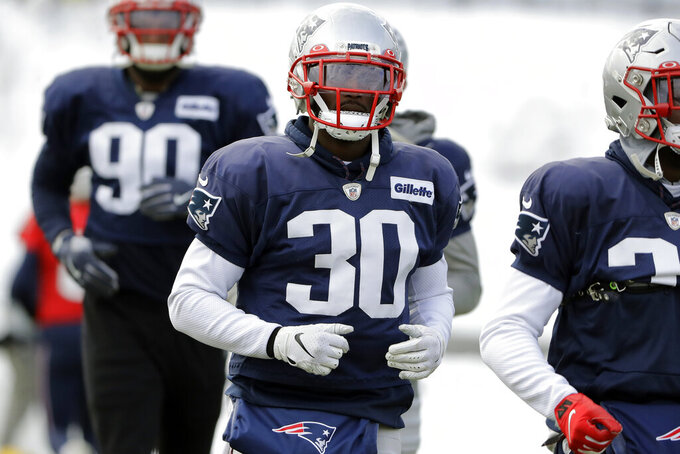 FOXBOROUGH, Mass. (AP) — Christmas has always been about tradition for Devin McCourty: Dressing the kids in matching onesies, letting them open one present on Christmas Eve, and preparing for the NFL playoffs.

The Patriots safety has had to balance family and football during his 10-year career, with New England winning the AFC East every year he's been in the league. But since the team signed his twin brother, Jason, last year, that's been a little bit easier.

“Now we get to do it together,” Devin McCourty said on Tuesday, when the team practiced on the usual NFL off-day so it could take Christmas off.

“Last year we took a family picture. It was brutal; we had kids crying. We'll see if we can work on that this year, see if we can get everyone to smile. I highly doubt it,” he said. “But things like that, we didn't get to do before. Christmas meant FaceTiming each other and letting the kids talk to each other. Now it's a lot of fun just to be able to go to each other's houses.”

A two-time Pro Bowl selection and three-time Super Bowl champion, Devin McCourty has been a steady presence in the secondary and in the Patriots locker room, serving as a defensive captain for the last nine years. But the family/football balance changed two years ago, when the Patriots signed his brother.

After playing together in high school and at Rutgers, they spend the first nine years of their pro careers apart. They now live across the street from each other and have lockers at Gillette Stadium two stalls apart.

“It's a lot of fun to be still doing this 10 years in, playing football,” Devin McCourty said. “You talk about the importance of family and being able to cherish some of the best moments — we haven't really been able to do over the last nine years. To do that two years in a row now has really made playing football special in Year 9 and 10 just because of all of the memories we have that really have nothing to do with football, just being able to live out our dream.”

The Patriots (12-3) beat Buffalo on Saturday to clinch their 11th straight AFC East championship. With a victory over Miami (4-11) on Sunday (or a Kansas City loss), New England would secure the No. 2 seed in the conference and a first-round bye.

“I love this time of the year,” McCourty said. “You're playing for something, you're doing something that's meaningful, but you're also spending it with the people you love the most.”

McCourty said he will take most of Wednesday off to be with his family. But when the kids take their naps, he might break out his iPad to study up on the Dolphins.

“It's a part of being a professional,” McCourty said. “You've got tomorrow to spend with your family, and make it special. Thursday and Friday, we've got to be locked in, laser-focused. Because it's Christmas everywhere; the Dolphins are dealing with the same thing, of making sure you have a special Christmas with your family, but also being a professional and doing the job.”

Jason McCourty left Saturday's game against the Bills with a groin injury. There was no update on his condition, and he was not in the locker room during the media availability on Tuesday.

Patriots safety Duron Harmon said the time off will be good for everyone.

“It will be good to get away from it and spend time with your families,” he said. “But we know when we step in this building what it's all about.”