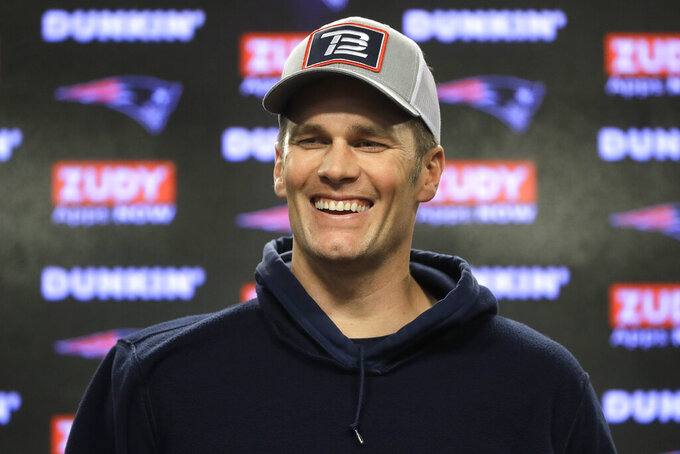 FOXBOROUGH, Mass. (AP) — As a young football fan growing up in California, it didn’t take Tom Brady long to dislike the Dallas Cowboys.

“I’ve really not liked the Cowboys since coming out of the womb as a Niner fan,” Brady joked this week. “They’ve got a lot of great players in their history. Guys that I just, as a Niner fan, you’d play the Cowboys and every time they’d hand off to Emmitt Smith would be a 5-yard gain and you would pull you hair out.”

It’s been more than 20 years since Dallas’ trio of Smith, quarterback Troy Aikman and receiver Michael Irvin helped propel the Cowboys to their most recent Super Bowl win.

And since he entered the league in 2000 Brady has taken out his childhood frustrations on them every chance he’s gotten, beating the Cowboys in each of his four meetings against them as the Patriots’ starting quarterback.

Dallas is hoping the team it’s bringing to New England on Sunday can change some of that recent history.

Thanks largely to the play of quarterback Dak Prescott over their past three games the Cowboys (6-4) enter Week 12 as the NFL’s top-ranked offense, a position they haven’t held at the end of a season in more than 40 years.

They’ll face a 9-1 Patriots team being led not by Brady’s arm but by the league’s top-rated defense. It is holding teams to just under 11 points per game to go along with an NFL-best 28 takeaways.

“It’s exciting,” Prescott said. “You talk about wanting to win championships. You’ve got to beat the people that have won.”

The Patriots have given up only nine total touchdowns on defense in 2019, four of which came in their 37-20 loss at Baltimore in Week 9. New England has yet to allow a red-zone touchdown at home this season.

While the Cowboys don’t have a dual-threat quarterback such as Baltimore’s Lamar Jackson, Prescott is having a career season. He leads the NFL with 322.1 passing yards per game and has thrown for 1,098 yards over his past three games — the best three-game stretch in franchise history.

“That’s who he is,” Dallas running back Ezekiel Elliott said. “That’s the type of player he is, the guy he is, the leader he is and he’s continuing to attack. He hasn’t let up, as we expect from Dak.”

Likewise, the task of trying to contain Prescott is high on the priority list for the Patriots.

“They’re at the top of the league for a reason,” cornerback Stephon Gilmore said. “It’s a big challenge. And I’m looking forward to it.”

Dallas defensive lineman Michael Bennett is set to play at New England exactly a month after the Patriots traded him for a conditional late-round draft pick in 2021. The former Texas A&M player has 3½ sacks in three games with the Cowboys after getting to the quarterback 2½ times in his only six games with New England. Bennett, who also had stints with Tampa Bay, Seattle and Philadelphia, is one of 11 players in NFL history to have multiple sacks with five franchises.

Bennett didn’t have much to say about the prospect of facing New England. When he was traded, he had just returned from a one-game suspension over a “philosophical difference” with defensive line coach Bret Bielema. He also said there wasn’t any extra motivation to get a sack of Brady, and Bennett spoke highly of his former teammate.

The Cowboys haven’t gone three straight games without at least 100 yards rushing in the same season since drafting Elliott in 2016. Dallas has two straight sub-100 games going into the meeting with the Patriots, who rank 19th in the NFL allowing an average of 97.3 yards per game.

The Cowboys had 50 yards rushing in a loss to Minnesota and 75 in a win over Detroit.

With a victory, New England would extend its streak to 17 consecutive seasons with at least 10 wins, which would be an NFL record.

The Patriots’ offensive line could see the return of left tackle Isaiah Wynn to the starting lineup.

Wynn played just two regular-season games before going on injured reserve with a foot injury. It was the second straight year he had spent time on IR after a preseason Achilles injury caused the 2018 first-round pick him to miss his entire rookie season.

If he returns, he’ll rejoin a line that also previously had to adjust to losing starting center David Andrews in the preseason because of blood clots.

The absences have particularly affected the rushing game.