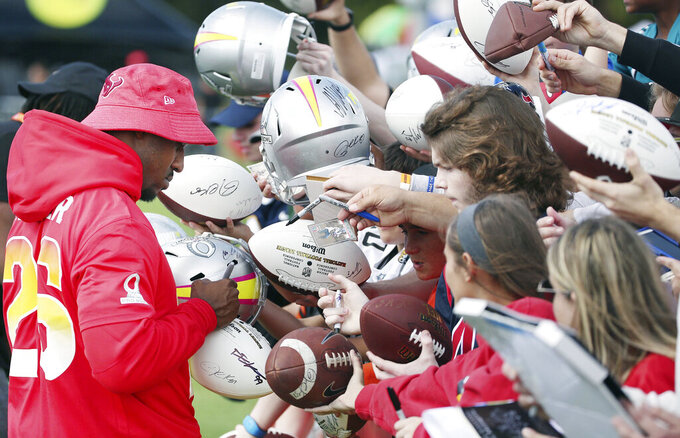 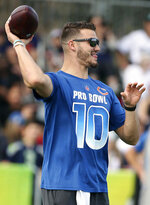 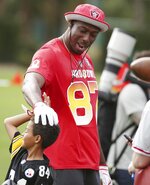 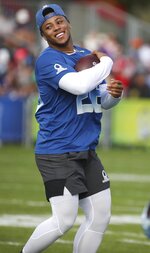 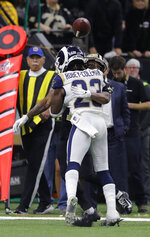 The stream cut in and out occasionally, causing Campbell to think for a brief moment that he missed something when no flag was thrown on Los Angeles Rams cornerback Nickell Robey-Coleman late in the NFC title game. Turns out, Campbell saw it perfectly clear and was stunned officials chose not to penalize Robey-Coleman for flattening Saints receiver Tommylee Lewis before the ball arrived.

The now-infamous no-call has been the talk of Pro Bowl week, with several players calling for better officiating and more accountability for those in black and white. Others suggest expanding the use of video replay.

"You just make a better call," Philadelphia Eagles safety Malcolm Jenkins said. "I know there's been talk about replay. But you really didn't need replay to make that call. It was just a missed call. It was that simple. That happens. You have human error, but it's unfortunate when that changes everything that you've worked for as a team and how hard it's been to get back to that spot. That's tough."

No one at the league's annual all-star game went as far as retiring New Orleans Saints tight end Benjamin Watson did, though. Watson ripped NFL Commissioner Roger Goodell on Thursday for his public silence following the blown call.

Watson posted a letter to Goodell on Twitter, saying "we all realize that football is an imperfect game, played, coached and officiated by imperfect people. What occurred last Sunday in New Orleans, though, was outside of that expected and accepted norm."

"Your continued silence on this matter is unbecoming of the position you hold, detrimental to the integrity of the game and disrespectful and dismissive to football fans everywhere," Watson continued. "From the locker room to Park Ave., accountability is what makes our league great. Lead by example. We are waiting."

Officials could have — and by most accounts should have — flagged Robey-Coleman for pass interference and helmet-to-helmet contact during the play. Drew Brees' pass fell incomplete inside the Rams 10-yard line with 1:45 left in a tie game. The Saints settled for a field goal. The Rams tied the game on Greg Zuerlein's 48-yarder in regulation and won it in overtime with his 57-yarder.

"How many times have you played a football game and seen the call that should have been called but didn't, or a call that got called and it shouldn't have been called?" Campbell said. "It happens all the time in this game. It's just part of football. You get upset for a second, but then you go keep playing ball. The Saints did have a chance. They had the ball in overtime, had a chance to go out there and win it. This game, it's tough."

But the overwhelming sentiment at the Pro Bowl was something needs to be done to prevent errors as egregious as the one in the NFC title game.

"The tough thing is we have things that are reviewable, things that aren't reviewable," Buffalo Bills defensive lineman Kyle Williams said. "You can't review it inside of two minutes. I don't know why we put limitations on things, but at the same time, games have missed calls one way or another. But you hated to see something that appeared to be that way finish a game like that, finish a season. For us as a league, it's hard to limit when you can and when you can't review those things and do all that."

Added Dallas Cowboys linebacker Leighton Vander Esch: "If dudes are missing calls on the field, they've got to make them up in the box."

Several others echoed Vander Esch's argument, which essentially was: What's the point of having extra officials upstairs and more watching at the league office in New York if no one can step in and correct an obvious mistake?

"Honestly, full speed, I was like, 'He kind of got there early, but it was bang-bang,'" New York Giants safety/special teams ace Mike Thomas said. "You slow it down, clearly he got there early. I was like, 'Ohhh.' It looked way worse when you slowed it down.

"We've been calling for — players, coaches, fans — for replays for pass interference calls anyway. There's a bunch of times they throw it on DBs and we feel like we're in great position. I think you just make all those major calls like that reviewable and just got from there."

Not everyone was so eager to broaden use of replay.

Campbell, for one, urged fans and colleagues to slow down. He believes more replay would only muck up the tempo of games and make them longer.

"You cannot open up a can of worms," said Campbell, an 11-year veteran and a team player rep. "But what you can do is you can try to prepare the referees better because they can't miss that call. In those clutch situations, in that moment, he has to make that call. And whatever the consequences are for him missing the call, maybe make those public so we all know and everybody feels better. Make them be held accountable and they will have the motivation to call it the right way."