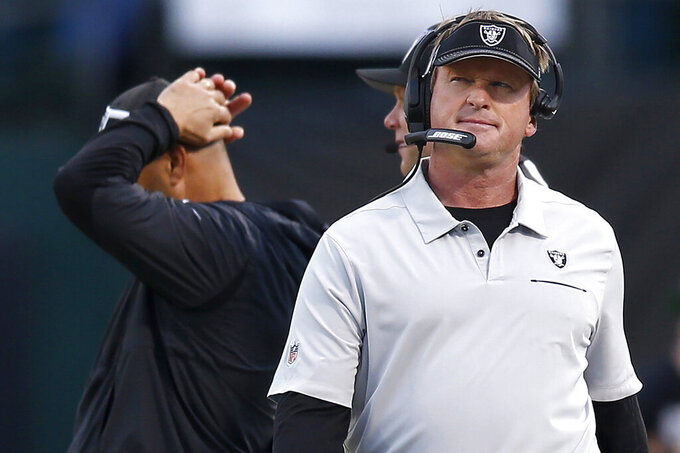 FILE - In this Dec. 8, 2019, file photo, Oakland Raiders head coach Jon Gruden walks on the sideline during the second half of an NFL football game against the Tennessee Titans in Oakland, Calif. Dealing with an offseason move to Las Vegas, an overhaul of his defense and contending in a division with Patrick Mahomes and the defending Super Bowl champion Kansas City Chiefs is a tough enough task for Gruden. It all pales in comparison to trying to keep his players safe from COVID-19 in a city where the coronavirus is spreading. (AP Photo/D. Ross Cameron, File)

LAS VEGAS (AP) — Quarterback Derek Carr hit Henry Ruggs III on a go route that showed off the rookie receiver’s speed and a member of the Las Vegas Raiders staff marked the moment by blaring a song by rapper Lil Baby.

There was quite the vibe Wednesday at the team’s new 335,000-square-foot, $75 million practice facility just south of the Vegas Strip.

“That’s the biggest thing, I think we have a great staff that works on keeping our guys as healthy as possible, whether it’s stretching or pool workouts or cryotherapy — everything that we do here, and they provide,” he said.

Coach Jon Gruden said Jacobs and Trent Brown sat out for scheduling reasons in what is part of the new normal.

“Everybody has a schedule so there will be some strange things going on,” Gruden said. “It gives us an opportunity to look at some players, in this limited amount of time, that we want to look at. We got good guys here, we got some really promising young players and we got the right kind of guy leading them from a veteran standpoint. That’s what I’m probably most excited about right now.”

Gruden also acknowledged being excited about the new digs for the team, which relocated from the Bay Area this summer in preparation for its first season in Las Vegas.

"There’s a different vibe, this is a great facility,” Gruden said.

Receiver Nelson Agholor, who won a Super Bowl with the Eagles following the 2017 season, said he loves the resources the performance center provides, from the sand pits and hills for receivers to work on footwork to the training room and strength staff.

"They give you things that you can utilize to make yourself a better player,” Agholor said. “This is a blessing to have a facility like this.”

New Raiders tight end Jason Witten, who spent 16 seasons with the Dallas Cowboys, knows what a world-class facility can do to ignite a team during training camp.

“It’s created a buzz,” Witten said. “There’s an energy from this facility, this city, this community. I think you feel it when you come in here. It’s first class. They didn’t miss a beat with all the details of going in there to provide great opportunity. I think that says a lot from ownership, the message being sent to the players.”

Witten said many of his younger teammates should look at the opportunity of being able to prepare for the season at the new facility as a challenge. After all, it’s one of the things that convinced the four-time All-Pro to sign with the Raiders.

“Don’t take it for granted,” Witten said. “It’s not like this is everywhere and certainly I’m fortunate to be a part of it and it was one of the things that went through my thought process, ‘Hey, what a neat opportunity this is to be able to experience something like this.’ And even the veteran players that have been a part of this franchise for their entire careers, you feel it from them, too. Like, man this is really neat to be on the big stage and to have this type of facility.”