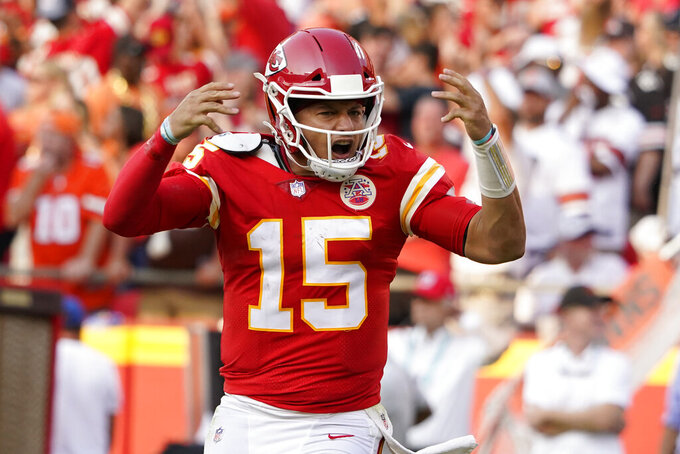 KANSAS CITY, Mo. (AP) — Just about everyone inside the Kansas City Chiefs locker room remained confident on Sunday when the upstart Cleveland Browns scored a touchdown to take a 29-20 lead early in the fourth quarter.

The reasons were standing on their sideline: Andy Reid and Patrick Mahomes.

Reid has never lost to the Browns in nine meetings, and he's been downright dominant in September, using the offseason to put in place plans that have produced 15 consecutive wins in the opening month of the season.

Mahomes is merely 11-0 with 35 touchdown passes and no interceptions in his career in September.

So yes, the Chiefs trailed by two possessions against an AFC rival with Super Bowl aspirations.

They were never worried, though.

“I just think we have a lot of belief in this team,” said Mahomes, who was 27 of 36 for 337 yards with three touchdowns and ran for another score in rallying the two-time defending conference champions to a 33-29 victory.

“We've been in those situations before and we think we can win no matter what the situation is.”

That might be the biggest defense between the Chiefs and Browns and a lot of other teams: Mahomes and Co. have been to three straight AFC title games, back to back Super Bowls and have a Lombardi Trophy under their belt.

Talent is one thing, and the Chiefs and Browns both have plenty of it. Experience winning big games is another entirely.

Not only do the Chiefs have that, so does Reid, who for years shouldered the label as the best coach never to win the Super Bowl. But his triumph over San Francisco a couple of seasons ago, combined with his continued success in Kansas City, has put him in Hall of Fame territory as he seeks a fifth consecutive AFC West championship.

“It's a 60-minute game and you have to play a 60-minute game. You don't get anything for playing a 30-minute game,” Browns coach Kevin Stefanski said. “Mentality-wise, we got beat. We got outcoached. We got outplayed. Great football team over there, and I have a lot of respect for them.”

Tyrann Mathieu was cleared of COVID-19 on Saturday, but Reid chose not to suit him up, even though Mathieu had been participating in meetings virtually throughout the week. The Honey Badger, who tested positive for the virus despite being fully vaccinated on Sept. 1, is expected to play Sunday at Baltimore.

“That was completely me doing that. He wanted to play,” Reid said. “I just thought it was the right thing to do. I don't want to take any steps back and the Badger's been out for two weeks, and it was just best that we went this route."

The Chiefs got very little pressure on Browns quarterback Baker Mayfield until the second half, and a big reason was the absence of Frank Clark. The defensive end hurt his hamstring in training camp and, even though he returned to practice last week, he was unable to get properly warmed up Sunday and was declared inactive.

The Chiefs moved Chris Jones from defensive tackle to end this season, hoping he could help their stagnant pass rush. He was held in check until the second half, when he dropped Mayfield twice for his 10th career multi-sack performance.

“We were all over the place,” Jones said. “They were giving us a lot of different looks, especially with the play action when we were expecting the heavy run, and we'd expect a run and we'd get a play action over the top. So we just had to settle down as a defense, and once we got settled, we were able to get them off the field.”

The Chiefs' completely rebuilt offensive line had a rollercoaster Week 1. They were pushed around much of the first half, but rebounded in the second to pry open some holes for Clyde Edwards-Helaire, who had 43 yards rushing, and kept Mahomes relatively clean against Browns pass rushers Jadeveon Clowney and Myles Garrett.

“There were times I drifted to the back just a bit too far and they were kind of getting those guys around the 10-yard area, so I had to step up pretty quickly,” Mahomes said, “but we’ll continue to work on that. They’re doing a great job of being firm in the front and kind of edging those guys so I can still be in the pocket.”

The Chiefs, who were limited to crowds of about 16,000 last season, welcomed back a full house Sunday for the first time since the start of the pandemic. And the sellout crowd of 72,936 made things quite a bit tougher on the Browns.

“Our fans were unbelievable. We let them out of the cage,” Reid said. "I mean, they were wild. I loved every minute of it, and it made a difference. When you can get a punter to drop a ball, that’s pretty good for all your fans.