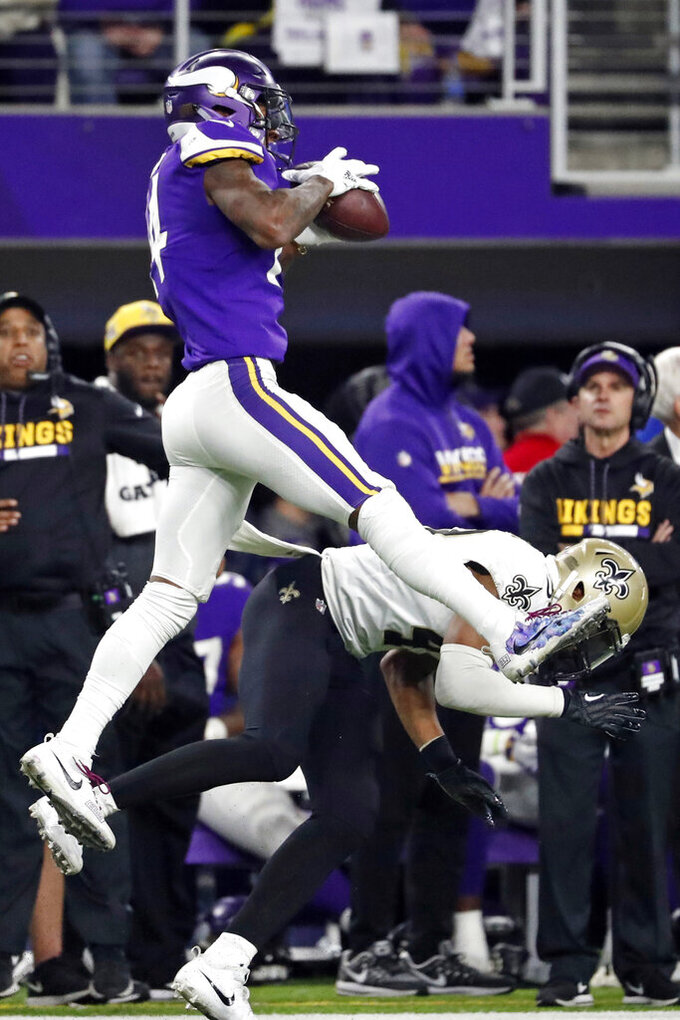 FILE - In this Jan. 14, 2018, file photo, Minnesota Vikings wide receiver Stefon Diggs (14) makes a catch over New Orleans Saints free safety Marcus Williams (43) on his way to the winning touchdown late in the second half of an NFL divisional football playoff game in Minneapolis. Marcus Williams asserts that he became a better player in the past year, although his numbers didn't show it. He enters Year 3 aiming to live up to high expectations, even if he may never completely live down a missed tackle in Minnesota that brought a ruinous end to his rookie season. (AP Photo/Jeff Roberson, File)

METAIRIE, La. (AP) — Saints safety Marcus Williams asserts that he became a better player in the past year, whether his numbers showed it or not.

He enters Year 3 aiming to live up to high expectations, which would only help him live down a missed tackle in Minnesota that brought a ruinous end to his rookie season.

The Saints drafted Williams because they saw him as a bright and reliable player with an exceptional ability to locate and bring down balls thrown in his coverage area. As a rookie, he intercepted four passes in the regular season. He added another pivotal interception in a divisional round playoff game against the Vikings that helped the Saints claw back from an early double-digit deficit and take a late lead. But in a cruel twist, he also was at the center of a dramatic, 61-yard Vikings touchdown as time expired that stunningly ended the Saints' season.

Williams arrived at 2018 Saints training camp determined not to allow the play known as the "Minneapolis Miracle" to define him. He reported in impeccable shape and was one of the standouts of 11-on-11 drills in practice, intercepting record-setting quarterback Drew Brees several times. But during the regular season, he wasn't around the ball as often as in his rookie campaign and his production fell.

He intercepted two passes and his tackles fell by about 20 percent, but Williams points out that quarterbacks were much more aware of his game in his second season and did not challenge him as often.

"I do have good ball instincts," Williams asserted. "It's not that I just came in with them. They're not leaving."

Williams said he has specific goals for this season, but prefers to keep them to himself.

"I just write them down, have them in my pocket, have them in my phone, have them on my wall, look at them every single day so they're engrained in my mind," Williams said. "That's just going to help me to continue to be a better player overall."

Saints defensive coordinator Dennis Allen, a former college safety himself at Texas A&M, said Williams played well overall and demonstrated an improved understanding of the Saints' defensive scheme in Year 2. Allen just wasn't sure if Williams' instinctive play and natural ability shined through as much as it could have while the young safety was so focused on thinking the game.

"We feel great about where he's at and the key for him now is just go out there and play; Don't worry about any type of expectations that's put on you from the outside world," Allen said. "You see this with everyone. Not every season's the same. Some years are better than others. It doesn't mean you're playing poorly. It's just sometimes those plays don't quite come your way.

"The biggest thing really for all these guys — and especially the young guys is — look, know what to do within the scheme, but don't overthink things. Just go out there and play the game, the same game you've played your whole entire life," Allen said. "Use your natural instincts and ability to go make plays. And that's kind of one of the conversations we've had with him — and we're expecting big things out of him."

That's what the Saints should get out of Williams if he succeeds in his stated desire to model his approach to playing safety after newly inducted Pro Football Hall-of-Famer Ed Reed.