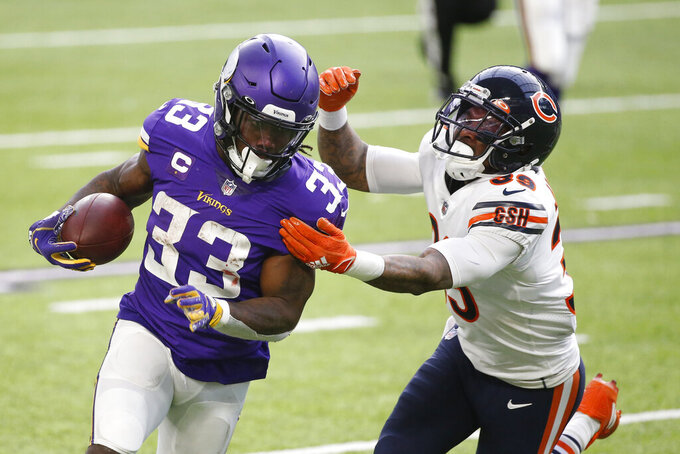 Here comes another one on Christmas Day.

“Yeah, it’s kind of crazy preparing for them; it almost feels like a divisional opponent,” Thielen said. “It’s always a difficult game. It’s always a tough defense and we always have our work cut out for us. I’m assuming it’ll be similar again on Friday.”

This will be the fifth meeting in four years, including two playoff games in which Minnesota scored the winning touchdown on the final play of each.

A victory would allow the Vikings (6-8) to celebrate the holiday by keeping alive thin hopes of sneaking into the playoffs. For the Saints (10-4), a victory would clinch the NFC South for a fourth straight season and keep alive hopes of winning the top seed in the conference – if Green Bay losses its last two games.

The loser will head into the new year on a three-game skid, but the Saints have the benefit of knowing they’ll be in the playoffs regardless.

New Orleans has double-digit wins in each of the past four regular-seasons meetings, only to see their last three playoff runs end short of the Super Bowl, with two losses in overtime and the first coming on a 62-yard Minnesota TD as time expired in regulation.

The Saints’ recent wobbles beg the question whether a similar playoff disappointment is again in store. But coach Sean Payton prefers to focus on why this team should be ready to take the next step.

“I love the grit, the toughness of this team. They’ve come back, played their tails off the next year, got on a roll again this year,” Payton said, referring to New Orleans’ nine-game winning streak earlier this year. “Will it need to be the Super Bowl (for the season to be considered successful). Probably so. But you know what? That is a good measuring stick. And that gives you an indication of how organizationally the culture’s changed, and we embrace that.”

Justin Jefferson, the third rookie wide receiver in Vikings history to be picked for the Pro Bowl, returns to his home state after a decorated career at LSU. He leads all NFL rookies with 1,182 receiving yards and has 21 receptions of 20-plus yards, tied for the most in the league.

Jefferson has several ticket requests to fulfill from family and friends, but not as many that would be possible in a normal year given the pandemic-limited attendance at the Superdome.

“For us it’s good not going to an environment that’s loud where you can’t hear,” Jefferson said. “The circumstances this year with COVID, it is what it is. We have to bring our own energy, bring our own excitement, and come prepared.”

Saints quarterback Drew Brees has been trying a new type of protective vest under his jersey since returning last week from rib fractures and a lung puncture that sidelined him for a month. Brees said he didn't find it too restrictive, noting he played with “a bigger, thicker flak jacket” early in his career before switching to a thinner model molded to his ribs in recent seasons.

“Everybody comes out of the woodwork when you have rib injuries, and tells you that, ‘Hey, wear this. You can jump on a grenade you’ll be OK,' ” Brees continued.

He said the padding he’s trying out now “supposedly” would offer grenade-blast protection, but added, "I won’t be the one to prove that theory.”

The 41-year-old Brees passed for 234 yards and three touchdowns with his new torso padding in a 32-29 loss to Kansas City last week. He needs 154 yards to become the first QB in NFL history to pass for 80,000 career yards.

Minnesota’s young defense is coming off one of its worst performances this season in a 33-27 loss to Chicago. To make matters worse, the injuries have piled up in this shortened week.

“You always could use some extra time when you’ve got some injuries," Vikings coach Mike Zimmer said. "We’ve got to get other guys ready to go.”

The Vikings have just four sacks in the last five games and have allowed 28.2 points per game in that span.

The Saints' third-ranked defense has had two of its worst games against the run during the current two-game skid, allowing 179 or more yards rushing in each. Now they have to contend with Minnesota's dynamic Dalvin Cook, who has 1,833 yards from scrimmage.

“The last couple games, I think we could’ve done a little bit better in our run game,” Jordan added. “We’re going to focus on that, get back to our fundamentals, get back to playing our defense that we want to play. And once you make a team one-dimensional, we can really start attacking them.”