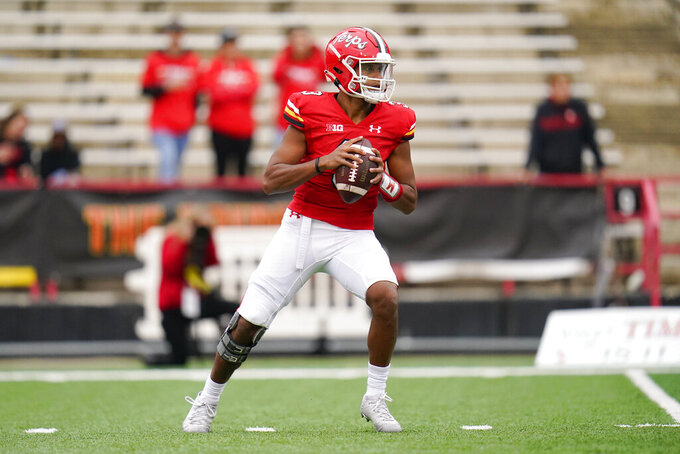 COLLEGE PARK, Md. (AP) — Maryland quarterback Taulia Tagovailoa had a lot on his mind this week. That was only natural after his brother Tua was stretchered off with a head injury while playing for the Miami Dolphins.

“They're really, really close,” Terrapins coach Michael Locksley said. “I think the one thing that was able to settle him down, was he was finally able to get a FaceTime with Tua, and Tua basically said, ‘Hey, I’m fine man. Go play.'"

Taulia Tagovailoa threw for 314 yards and a touchdown, and Maryland handed Michigan State its third consecutive loss, 27-13 on Saturday.

The Terrapins (4-1, 1-1 Big Ten) scored touchdowns on their first two possessions, and the Maryland defense was solid as the Terps passed their first test in what feels like an important October for the program.

Payton Thorne threw for 221 yards and a touchdown, but the Spartans (2-3, 0-2) went scoreless in the second half against a Maryland defense that still has a lot to prove. Michigan State also had problems on special teams, missing a field goal, having another one blocked and botching an extra point because of a bad snap.

Tagovailoa went 32 of 41 and moved ahead of Boomer Esiason for third place on Maryland's career list in yards passing.

“I'll take my hat off to that kid,” Locksley said. “You guys have no idea what the last 24 to 48 hours have been like for him."

Early on, it felt like this game might turn into a shootout. Maryland opened the scoring on a 15-yard touchdown run by Antwaine Littleton II. Then Michigan State answered with a 12-yard scoring run by Elijah Collins.

Colby McDonald scored on a 2-yard run for the Terps, and then the defenses finally settled in. The next touchdown didn't come until Thorne's 8-yard strike to Jayden Reed with 4:24 left in the half, and the failure on the extra point left Michigan State still trailing 14-13.

The Terps drove 80 yards in 13 plays to go up 21-13 on Tagovailoa's 5-yard touchdown pass to Rakim Jarrett with 42 seconds left in the second quarter. Maryland nearly added to its lead moments later when Dante Trader Jr. intercepted Thorne's pass and ran it back to the end zone, but a personal foul call on Corey Coley Jr. wiped out that turnover.

The Spartans had a chance to kick a field goal at the end of the half, but Jakorian Bennett blocked Jack Stone's 45-yard attempt.

The Maryland defense took over from there, holding Michigan State to 8 yards in the third.

“Obviously, I’m frustrated and disappointed, but we just have to move forward,” Thorne said. “We just got done playing the game 30 minutes ago, but all we can control is what’s in front of us. That’s where my mindset is at.”

The Spartans did pull off an impressive goal-line stand in the fourth, stopping Littleton four straight times after the Terps had first-and-goal from the 2, but the rain picked up in the final quarter, making it even harder for Michigan State to move the ball.

Michigan State: The season is slipping away fast for Michigan State — to the point where it wasn't even much of a surprise that the Spartans had their four-game winning streak over Maryland snapped. There were early signs of life offensively, but they didn't last.

“I told the team there’s not a whole lot to say right now,” Michigan State coach Mel Tucker said. “I can’t make them feel any better. When we turn on the film, it’s going to be a lack of execution — offense, defense and special teams."

Maryland: The Terps play three of their four October games at home, so they have a chance to hang around in contention in the division before having to face Ohio State and Penn State next month. Tagovailoa was sharp even in dreary weather, and Maryland has to be pleased with this defensive performance.

Littleton has scored a touchdown in six straight games dating to last season. ... Maryland's Chad Ryland made kicks of 43 and 51 yards in the second half, but he missed from 50 to end his streak of 24 made field-goal attempts in a row.

Michigan State: The Spartans won't get any kind of reprieve. They host No. 3 Ohio State next Saturday.