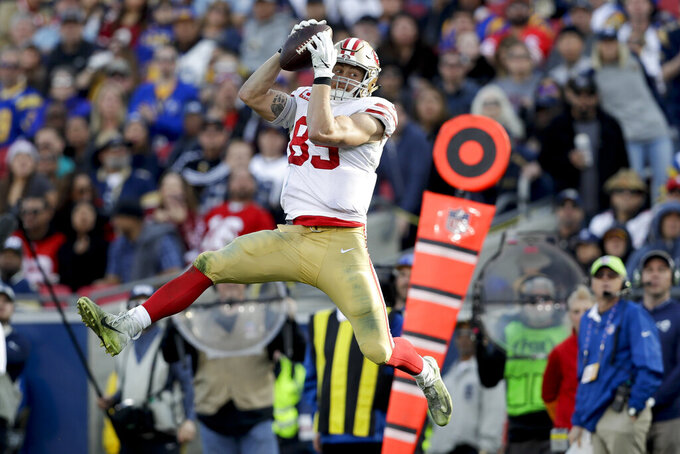 FILE - In this Dec. 30, 2018, file photo, San Francisco 49ers tight end George Kittle catches a pass against the Los Angeles Rams during the first half in an NFL football game in Los Angeles. Kittle had 1,377 yards receiving, setting a new record at the position.(AP Photo/Marcio Jose Sanchez, File)

ALLEN PARK, Mich. (AP) — The day before Tony Gonzalez was inducted into the Pro Football Hall of Fame earlier this month, he was asked about being a something of a pioneer at tight end. A guy who changed his position — and the game itself.

"I guess everyone is doing it now," he admitted of tight ends being used in a manner that Gonzalez didn't exactly invent, but certainly perfected.

Star tight end Jason Witten, who returned to the Cowboys after one year working on "Monday Night Football," said Gonzalez, whose 17-year career ended in 2003, changed things with his route-running and pass-catching skills at the position.

"Gonzalez kind of paved the way of my generation of, 'All right, this is a mismatch,'" said Witten, who will get strong consideration to join Gonzalez in Canton one day.

Two of the best active tight ends are coming off record-breaking seasons, and another one just had the best year of his career.

The 25-year-old Kittle keeps track of peers on his iPad, studying every move made by most of the starting tight ends. He takes a particularly close look at how the 29-year-old Kelce and 28-year-old Ertz are perhaps the best in the business at the position.

"I just try to pull stuff from them," Kittle said. "Ertz and Kelce are two of the top guys in the league, so if I can learn something from them, I can get to that level, too."

The best tight ends these days are too fast for linebackers to defend, and too big for defensive backs to cover. Teams often are sending tight ends on vertical routes, forcing safeties to run with them and leaving cornerbacks isolated on receivers to create deep problems for defenses.

"Guys aren't blocking," Walker said. "You don't see the traditional tight end on the end of the line anymore. If he's a star, he's usually in the slot catching passes. That's a difference from 10 years ago."

Even though tight ends are often lined up on the outside, Saints coach Sean Payton said players at the position who can also block near the line of scrimmage will always be valued because of the importance they can have in the running game.

"The ones that end up in the Hall of Fame are probably guys that did both pretty well," Payton said.

Rob Gronkowski excelled at catching and blocking for New England during his nine-year career, which ended with his retirement last spring. Lions coach Matt Patricia saw Gronkowski's impact up close for eight seasons and has witnessed the evolution of how multiple tight ends are deployed on any given snap.

"That's probably one of the bigger changes that has happened in the game throughout the past 15 years," Patricia said.

When Patricia was starting his NFL coaching career, he saw a lot of two-back, two-receiver formations with one tight end with his hand in the dirt or turf. As the game has changed, Patricia sees more schemes putting two tight ends on the field — usually one in place of a fullback — to take advantage of their ability to make plays in space with two receivers and one running back as part of the formation.

"Where the game has really evolved and changed is where those tight ends have much more of a wide receiver skillset," Patricia said.

It's not exactly unheard of to have such players. Kellen Winslow, Charlie Sanders and Shannon Sharpe are in the Hall of Fame — and not for their blocking acumen.

Desperate to add a difference-making player at the position, Detroit drafted T.J. Hockenson with the No. 8 pick overall in April. That was the earliest a tight end has been selected since San Francisco took Vernon Davis sixth overall in 2006.

The Lions weren't alone in April, making a first-round investment in a tight end who was a teammate of Hockenson's at Iowa. The Broncos drafted Noah Fant in the first round, taking a pair of tight ends off the board in the first 20 picks for the first time since the league went to 32 teams in 2002.

And yes, both from the same school, because pass-catching tight ends are so in vogue.