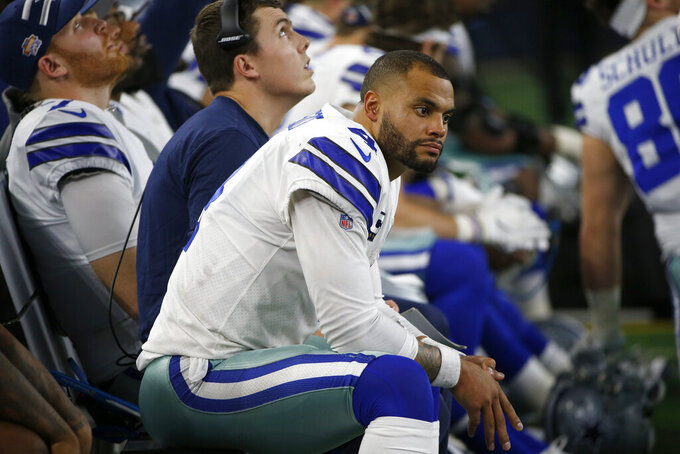 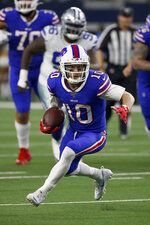 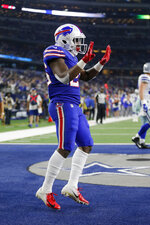 ARLINGTON, Texas (AP) — Cole Beasley savored a little extra time on the field with his former teammates after what had to be one of the most satisfying days of the Buffalo receiver’s career.

And to think he didn’t even have the most noteworthy play for the Bills’ pass-catchers.

John Brown became the first Buffalo receiver to throw a touchdown pass, Josh Allen set a franchise record by producing at least two touchdowns in an eighth consecutive game and the surging Bills beat the fading Dallas Cowboys 26-15 on Thursday.

Allen ran for a TD and threw a scoring pass to Beasley, who had 110 yards receiving in the stadium where he spent his first seven seasons as the Bills (9-3) got their first Thanksgiving win since 1975 in their first appearance on the holiday in 25 years.

Buffalo is 5-1 on the road for the first time since 1966, and the nine wins through 12 games are the most since the Bills finished 10-6 in Hall of Fame quarterback Jim Kelly’s final season in 1996.

“It’ll be the most satisfying day when we win a Super Bowl,” said Beasley, who was critical of the Cowboys after leaving, then had six catches and finished 2 yards shy of his career high against them. “It’s just another win, another step in the right direction.”

The Cowboys (6-6) stumbled after scoring a touchdown on their opening drive, giving Philadelphia a chance to rejoin them atop the NFC East after their fourth double-digit loss in the past six Thanksgiving games.

A lackluster showing for Dallas’ sixth loss in nine games came four days after owner Jerry Jones blasted the coaching staff following a loss to New England from a team that entered the season with lofty expectations.

Jones remained supportive of embattled coach Jason Garrett, who is in the final year of his contract in his ninth full season for a franchise that hasn’t been past the divisional round since the last of its five championships to finish the 1995 season.

“This is not the time for me,” said Jones, who made an in-season change when Garrett got the job in 2010. “I’m looking ahead at winning four or five straight. Every decision that I make over the next month will be with an eye in mind to get us in the Super Bowl now.”

Allen, whose 15-yard run put Buffalo ahead 23-7 late in the third quarter, was 19 of 24 for 231 yards and a career-best 120.7 passer rating as the Bills won their third straight game and solidified their hold on an AFC wild-card spot.

The second-year quarterback found the ball at the bottom of a pile after fumbling a snap on fourth-and-1 in the second quarter, quickly reached the ball over the first down spot and then stumbled forward 3 yards to the Dallas 28, pumping his arms emphatically afterward.

“On fourth down, fourth and short, fumbling the snap, I got to do a better job with that, and get the ball to our running back and let him do the job there,” Allen said. “But I wanted it. I wanted it really bad.”

On the next play, Brown took a pitch on a double reverse and lofted the ball to wide-open running back Devin Singletary for Buffalo’s first lead at 13-7 in the second quarter.

“I played a little backup quarterback in Pop Warner, but I wasn’t all that,” Brown said becoming the first non-QB with a touchdown pass for the Bills since Fred Jackson 10 years ago.

The Cowboys couldn’t blame a sputtering offense on the conditions after the windy and rainy loss to the Patriots. Dak Prescott threw an interception, lost one fumble and had another on fourth down as Dallas was outscored 26-0 over a 50-minute stretch.

Singletary became the latest back to have a splashier day than the two-time rushing champion, rushing for 63 yards with 38 more receiving. The 28-yard score was the easiest play he had all day, waiting for Brown’s throw to come down and waltzing into the end zone.

Most of the Buffalo joy was saved for Beasley, who had several momentum-changing plays along with his 25-yard touchdown in his first 100-yard game with the Bills and third of his career. The diminutive receiver who grew up in the Dallas area and played at SMU.

“I’m extremely proud of Cole and happy for him,” coach Sean McDermott said. “He’s worked hard. Obviously we’re happy to have him on our team. He said that to me before the game, and I’m just grateful for him and his mindset as well.”

CAN’T GET IT RIGHT

A week after getting criticized for taking a field goal down seven late against New England, the embattled Garrett went for it on fourth down from the Buffalo 6 late in the third quarter. But Prescott’s pass to Elliott in the flat wasn’t close, skipping in front of the running back.

Settling for field goals didn’t help the Cowboys much either. Brett Maher had a 36-yard miss partially blocked by Star Lotulelei on the final play of the first half and was wide right from 47 in the third quarter.

Prescott was 32 of 49 for 355 yards and two touchdowns. The first was to Jason Witten, who has the most yards receiving on Thanksgiving with 895 after catching six passes for 42 yards.

Dallas left guard Connor Williams injured a knee and tried to return before being ruled out in the second half. He was just a few weeks removed from arthroscopic knee surgery.

Bills: Home against Baltimore on Dec. 8.

Cowboys: At Chicago next Thursday.