Winless Bengals tie club mark for futility, Steelers up next 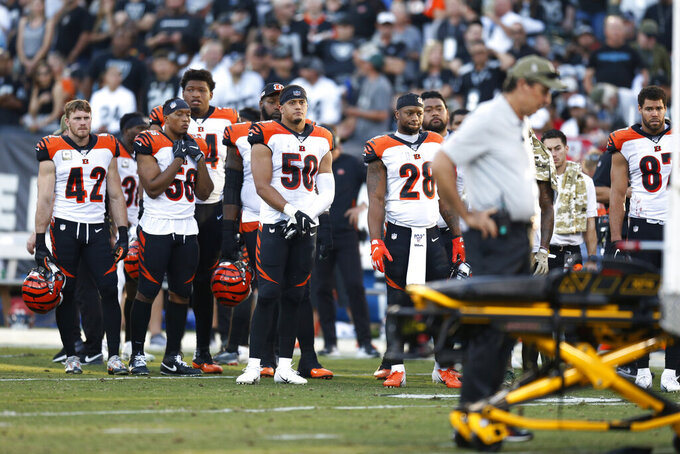 The Bengals' losing streak has spanned the globe and persisted deep into the calendar, landing them in the team record book for futility.

They’re now officially one of the worst clubs in franchise history, only the second to open a season 0-10 and the third to lose 10 straight games in a season. They’ve dropped 12 straight from the end of last season under coaches Marvin Lewis and Zac Taylor, a team-record losing streak over consecutive seasons.

A 17-10 loss in Oakland on Sunday also left them with 17 losses in their past 18 games overall, the worst such stretch in franchise history.

They have a chance to stamp themselves as the worst of the bunch Sunday when they host the Steelers, their Ohio River rival that always finds a way to beat them. Pittsburgh has won nine in a row against the Bengals and 12 of 13, including a first-round playoff victory at Paul Brown Stadium during the 2015 season.

The Bengals are in a very deep rut, facing the same questions each week about whether they’ve got it in them to finally get a win. The inexperience of rookie quarterback Ryan Finley has shown in his two starts, helping to extend the losing streak. It now appears that 0-16 is a possibility.

“I’ve never been 0-10 in my life,” running back Joe Mixon said. “It’s the same thing each and every week, and it’s definitely frustrating.”

The defense is ranked last in the league and allowed Derek Carr to complete all but one pass in the first half as the Raiders took the lead for good, but it improved in the second half and gave Cincinnati a shot to rally for that first win. The Raiders had a first-and-goal at the 1-yard line and settled for a field goal that kept it a one-score game in the fourth quarter. The offense couldn’t take advantage.

Finley hasn’t had enough time to develop chemistry with receivers — he hardly worked out with the starters before he was promoted — and it showed in Oakland, where he missed on throws numerous times. Familiarity comes with practice time, and the season is running out as the rookie learns on the fly.

Mixon and Giovani Bernard led the offense. The Bengals used the two running backs together more than they have in other games, trying to find a way to shelter a rookie quarterback and make up for the lack of a deep threat with receivers A.J. Green and John Ross injured. Mixon rushed for 86 yards and averaged 5.7 yards per carry, and Bernard added 30 yards rushing and 16 receiving.

Finley, with a big asterisk. He was under pressure in Oakland and got sacked five times, his receivers had at least three dropped passes, and he managed only 115 yards passing in an approach restricted to short throws. The same issues that limited Andy Dalton and led to his benching are on display with Finley, a rookie in a tough spot.

Receiver Auden Tate was taken off the field on a cart after bending his neck during a 20-yard catch in the fourth quarter. He accompanied the team back to Cincinnati. Taylor said he’s got a cervical sprain and he’s in concussion protocol.

88 — The number of possessions before one of their backs had a touchdown rushing. Mixon’s 3-yard reverse-field run in Oakland ended the drought. They had only three touchdowns rushing coming into the game, all by Dalton.

Decide how long to stick with Finley, or whether to go back to Dalton, who gives them their best chance to break that 0-for-2019 streak. When the Bengals switched to Finley, Taylor said it wasn’t going to be a game-by-game decision because the Bengals wanted to find out how Finley fits in their plans for next season.

On Monday, Taylor left the door open for another switch.

“Ryan’s our starter this week against Pittsburgh, and I have a hard time looking beyond that,” Taylor said. “Feel like he’s going to give us an opportunity to win this week.”