2 QBs and stingy defense have Dolphins in playoff contention 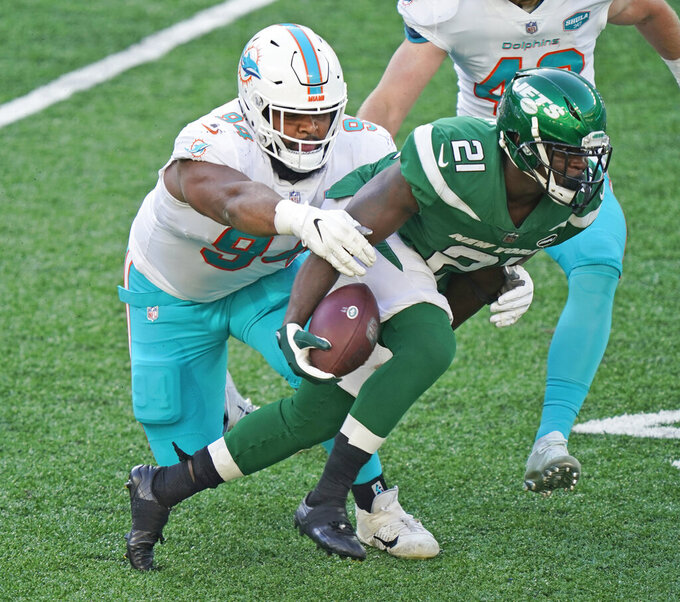 MIAMI (AP) — The way the Miami Dolphins are playing defense, it doesn’t matter who they have at quarterback.

Ryan Fitzpatrick is 4-3 as the starter and rookie Tua Tagovailoa is 3-1, largely because the Dolphins rank second in the NFL in points allowed per game.

Stingy defense has the Dolphins (7-4) in contention for their first AFC East title since 2008, and they're 11-point favorites Sunday at home against Cincinnati, even though they don’t know who their QB will be.

Tagovailoa missed Sunday’s 20-3 win at the New York Jets because of a sore thumb on his throwing hand, and he remains coach Brian Flores' starter if healthy.

Only five AFC teams have more wins than the Dolphins, who trail division leader Buffalo (8-3) by one game. Flores doesn't want his players thinking about any playoff race, however.

“You can't get to where you want to get without handling what's right in front of you,” he said.

The Dolphins rank only 19th in the NFL in yards allowed, but they know how to get off the field. Their defense leads the league with a third-down conversion rate of 33%, and two takeaways Sunday increased their season average to 1.7 per game, which ranks second.

Run defense has been a problem, and the Jets' Frank Gore ran for a season-high 74 yards Sunday. But since Week 4, only one opponent has scored more than 21 points. In two games this year against the rival Jets, the Dolphins allowed a total of three points — an average of less than a safety.

Flores was hired last year because of his success as a defensive play caller at New England. Now his first-year defensive coordinator, Josh Boyer, is starting to receive acclaim.

“Oftentimes you give me too much credit,” Flores told reporters. "Josh has done a great job the entire year.”

Miami's quarterback situation is increasingly muddled as Flores attempts to evaluate and develop his top draft pick while chasing a playoff berth.

Tagovailoa hasn’t played since being benched in the fourth quarter of Miami’s loss at Denver on Nov. 22, and the offense this season has been more productive when led by Fitzpatrick. He threw Sunday for 257 yards and two touchdowns with no turnovers.

But the Dolphins hold two first-round picks in the April draft, and they can't determine whether they still need a franchise quarterback if Tagovailoa is on the bench.

Fitzpatrick threw 14 times to DeVante Parker, who caught eight passes for 119 yards, all season highs. Parker's yardage total was higher than for all four games Tagovailoa has started.

The Dolphins have used eight running backs this year, and none has been able to get the ground game going.

They haven’t had a 100-yard rusher in the past 29 games, and DeAndre Washington led them Sunday with 49 yards. To make matters worse, Matt Breida and Patrick Laird lost fumbles on consecutive run plays in the third quarter.

Miami’s most memorable run was a 12-yard gain by the 38-year-old Fitzpatrick on a quarterback keeper.

“That one might have been in the game plan for Tua, not me,” Fitzpatrick said. “When it came in as the play call, I laughed to myself, called it, and was very surprised. Maybe 10 years ago, I score on that thing.”

7 — Xavien Howard's NFL-leading interception total, including one Sunday. He is tied for second in the league with 15 passes defended.

After facing Cincinnati, the Dolphins' playoff path becomes much tougher, with games remaining against Kansas City, New England, Las Vegas and Buffalo, who are a combined 29-15.