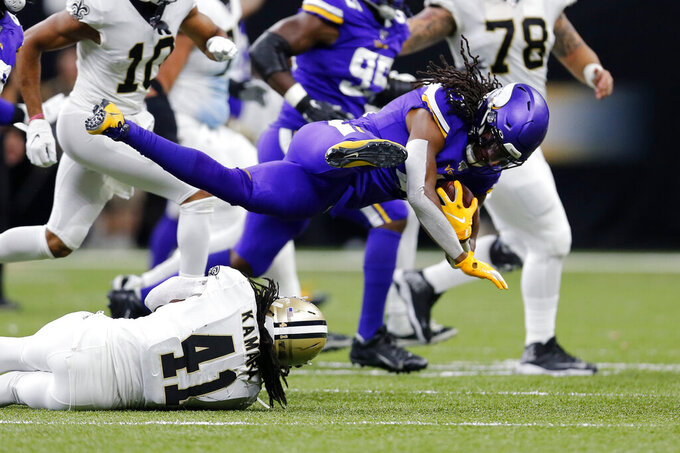 EAGAN, Minn. (AP) — Over Minnesota's past six games, Anthony Harris has picked off Russell Wilson, Aaron Rodgers and Drew Brees, owners of three of the four lowest interception percentages in the NFL this season.

The fifth-year safety has come a long way from undrafted practice squad player, as some of the league's best quarterbacks have been reminded recently. Harris, who became a full-time starter last year, tied for the regular-season league lead with six interceptions in 2019.

“Every time he got an opportunity, he stepped up,” Vikings defensive coordinator George Edwards said.

The tandem Harris has formed with Harrison Smith in the secondary has been a significant part of the success the Vikings defense has had this season, a value that will be scrutinized at team headquarters in the coming months with his contract set to expire which make him an unrestricted free agent. Harris and Smith will be an integral part of the plan to stop San Francisco's versatile offense in the divisional round game on Saturday.

“The scheme they play in is very good. It puts a lot of pressure on them, but it allows them to make a lot of plays, too,” 49ers coach Kyle Shanahan said.

Harris has done just that.

All three of those statistically improbable interceptions led to touchdowns for the Vikings. When Wilson's pass for Seattle was swatted at the line of scrimmage, his ill-fated attempt to knock the ball to the turf let it hang in the air long enough for Harris to snag it and run it in for a 20-yard score to break a second-quarter tie.

Harris helped break a second-quarter tie against Green Bay, too, when he darted in front of Davante Adams to grab an underneath throw by Rodgers and return it 10 yards. The Vikings were in the end zone three plays later.

Then at New Orleans, with the Vikings trailing 10-6 just before the two-minute warning, Harris hung on to the deep ball from Brees after landing on his back with a leaping catch, climbed to his feet and returned it 30 yards to reach Saints territory. The Vikings scored the go-ahead touchdown seven plays later and, with Harris helping hound star wide receiver Michael Thomas and keep Brees from doing his usual damage, pulled out a 26-20 victory in overtime to oust the Saints and advance in the playoffs.

Rodgers is the least likely quarterback to be picked off in league history, with a career interception rate of just 1.4%. He dropped that to 0.7% in 2019, with Kansas City's Patrick Mahomes, Wilson and Brees right behind him on the leader board.

Harris picked off Philip Rivers against Los Angeles for good measure during that six-game span, too, and tied for the league lead with six interceptions in 2019. The Vikings have 17 takeaways over their past six games, including five forced turnovers against Green Bay and New Orleans. The Saints (all-time record-low eight) and Packers (13) were the two best teams in the league at protecting the ball this season.

“He’s got really good vision, sees the ball well, quick reactor,” coach Mike Zimmer said. “I think where he’s improved the most is with his physicality. He’s always been a smart guy and he’s always had good ball skills, but as he’s grown up a little bit more he’s become a little bit more physical.”

Only 13 safeties were drafted in 2015, with just four of them coming off the board in the first three rounds. Harris, who also played quarterback and wide receiver in high school in Chesterfield, Virginia, just outside of Richmond, had an injury-limited senior season at Virginia that contributed to him being passed over. But the Vikings made him a priority free-agent signing, now counting him as one of their several success stories with undrafted players.

“It's been a long journey, but I look at it as a continuous thing,” the 6-foot-1, 202-pound Harris said. “It's not just something like, 'Now I'm here. Now I've arrived.' It's going to be a continuous process for me. It's just been embracing the opportunity that I have.”