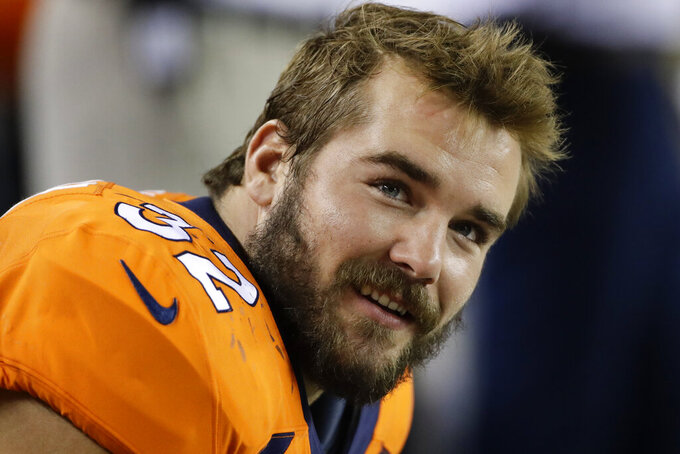 FILE - In this Aug. 11, 2018, file photo, Denver Broncos fullback Andy Janovich watches during the second half in an NFL football preseason game against the Minnesota Vikings, in Denver. Janovich has signed a three-year extension with the Denver Broncos worth $5.7 million. (AP Photo/Jack Dempsey, File)

ENGLEWOOD, Colo. (AP) — Andy Janovich won't be getting sleek new wheels after signing a three-year extension with the Denver Broncos on Friday worth $5.7 million.

"No, I'll probably hang on to that for a while," Janovich said of "Old Blue ," his beat-up 20-year-old Dodge pickup truck with the cracked windshield that he bought second hand back in college so he could haul around his mower.

The jalopy stands out among the high-end sports cars and tricked-out four-wheelers that fill the parking lot adjacent to the Broncos practice fields.

Janovich is the Broncos' jalopy, a thrifty, reliable helmet-busting no-frills fullback on a roster of sculpted physiques and finely tuned speedsters.

"Jano's good at his position, great guy, great type of guy you want on your team," coach Vic Fangio said.

And he's the perfect fit for Rich Scangarello's run-based offensive scheme because he can block, catch, run and even play tight end, Fangio added.

In a statement, general manager John Elway said, "Andy has developed into one of the best fullbacks in the league. He's exactly what you look for in a fullback — tough, reliable and a versatile part of not only the offense but also our special teams. It's nice to see how Andy's hard work has paid off."

The fourth-year pro from Nebraska is making $720,000 this season in the final year of his rookie contract as a sixth-round draft pick. He's the first member of the Broncos' 2016 draft class to sign a second contract.

Janovich missed the first three games this season after tearing a pectoral muscle in August, which put contract negotiations on hold.

Those talks picked back up upon Janovich's return to action two weeks ago.

Janovich jumped at the offer that makes him one of the highest-paid fullbacks in football rather than test free agency next spring.

"I just wanted to stay here," Janovich said. "I think that would be silly to turn that down, try to be greedy, go to free agency and just get a little bit more."

Janovich said he also sees a rebound coming for a franchise that has won just 18 of its last 50 games.

"You see it every week, I mean we're this close," Janovich said, pinching his thumb and index finger an inch apart. "And there hasn't been a defense that we haven't been able to drive the ball on. And you know, third, fourth quarter, we kind of come to a standstill. So, when we get that figured out, we're going to score more and more points. That's going to be awesome."

Janovich has scored three TDs himself in his career, two rushing and one receiving. He's also recorded a team-high 16 special teams tackles. Former Broncos special teams coach Brock Olivo once offered, "If we had 22 Janos, we'd be all right."

Janovich walked on at Nebraska and in his spare time worked construction and mowed lawns to pay for college as one of nine children in his family.

His position is a dying breed in today's NFL that's increasingly populated by players coming out of college football's "Air Raid" and RPO offenses that have left "3-yards-and-a-cloud-of-dust" well, in the dust.

"I just run into people," Janovich said. "It's pretty simple."