Chargers' Williams emerges as deep threat, but no touchdowns 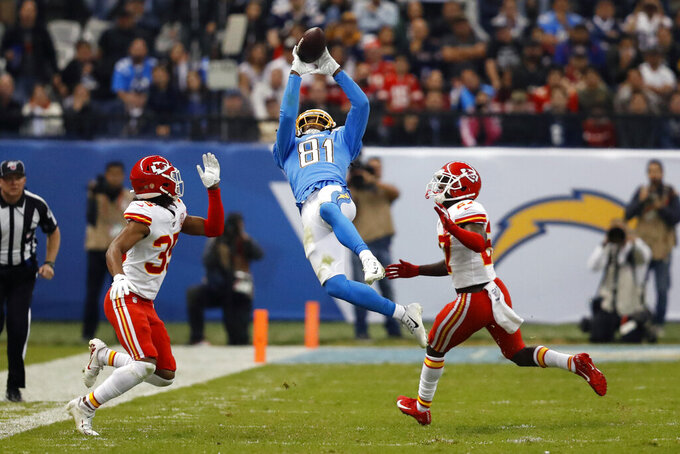 FILE - In this Nov. 18, 2019, file photo, Los Angeles Chargers wide receiver Mike Williams, center, makes a catch as Kansas City Chiefs cornerback Charvarius Ward, left, and defensive back Rashad Fenton, right, defend, during the second half of an NFL football game, in Mexico City. Williams has five straight games with a reception over 40 yards and has made some dynamic catches for the Los Angeles Chargers. The only thing the third-year receiver hasn't done this season is find the end zone. (AP Photo/Eduardo Verdugo, File)

COSTA MESA, Calif. (AP) — Mike Williams has emerged as one of the biggest deep threats in the AFC and has made dynamic fourth-quarter catches for the Los Angeles Chargers in the past two games. The only thing Williams hasn't done is find the end zone.

The third-year wide receiver is averaging 20.5 yards per reception — which leads the league for players with at least 30 catches — and has a catch of at least 40 yards in five straight games. But one year after having 11 touchdowns (10 receiving, one rushing), Williams has none going into Sunday's game at Jacksonville.

Williams' 778 yards are the third-most since 1948 after 12 games for a player without a touchdown, according to Sportradar.

“Once I get one, they will come in bunches. I'm just trying to get that one right now,” Williams said.

Williams' lack of touchdowns shows what a frustrating season it has been for the Chargers, who are 4-8 and have lost three straight. Los Angeles has been able to move the ball well, until it gets into the red zone. Their 46.3% touchdown rate inside the opponents' 20 is 26th in the league. The one red zone statistic that the Chargers lead is turnovers with six.

“It has been crazy. It’s certainly not for lack of trying to have things up for him down there and get him in the end zone," quarterback Philip Rivers said about Williams' touchdown drought. “We have to do a better job in the red zone."

Williams was the seventh overall pick in the 2017 draft but missed the first five games due to a back injury,and made only one start in 10 games. After having 11 receptions as a rookie, he started to become a bigger part of the offense last year with 43 catches while becoming the first Chargers wide receiver since Tony Martin in 1996 to have double-digit touchdowns.

While Williams was a red zone threat last season, he has shown another part of his game this year with his speed and dynamic catches on deep routes.

During the final minute of the Chargers' Week 11 game against Kansas City in Mexico City, Williams leaped between two Chiefs defenders to make a 50-yard grab at the KC 25. Los Angeles was down 24-17 and driving for a tying touchdown but the drive ended when Rivers threw an interception in the end zone.

Last week on fourth-and-11 at Denver, Williams made a one-handed grab while being draped by Broncos cornerback Isaac Yiadom. The 38-yard reception helped get the Chargers into field-goal range, but they would lose 23-20 on a last-second kick by Brandon McManus after a pass interference penalty.

Williams' ability to win the 50-50 matchups along with his wide catch radius were why the Chargers made him a high pick.

Williams is the first receiver since Pittsburgh's Sammie Coates in 2016 to have five straight games with a 40-yard catch. He has also joined a club that includes Terrell Owens and Calvin Johnson. If Williams can get another long reception against the Jaguars he would join Isaac Bruce and Mike Wallace, who did it in six straight games.

Denver's Anthony Miller has the longest mark at seven during the 1994 and '95 seasons.

Besides deep receptions, Williams leads the NFL with a 15.5-yard average at the catch and is third with an 81.6% first-down rate (31 of 38 catches). His five receptions for 117 yards marked his second 100-yard game of the season.

Williams' goals for the final four games is to continue making big plays as well as trying to get his first 1,000-yard season, which could provide momentum going into the offseason.

“I think he has had a heck of a year and probably battled through more nicks and things than he had last year,” Rivers said. "He has really shown a lot of toughness and been a heck of a player.”