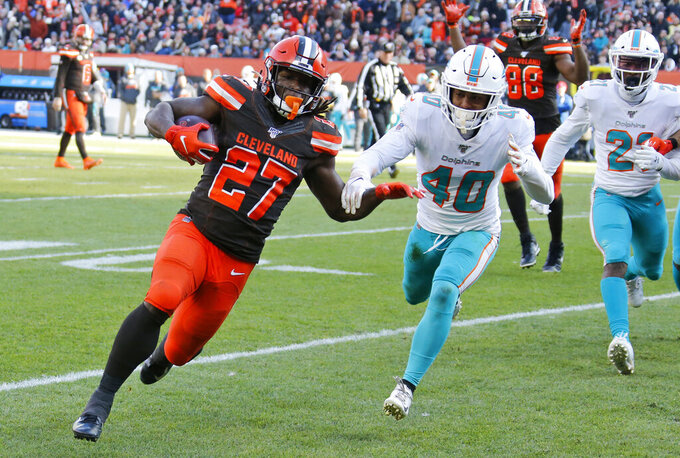 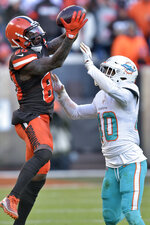 Here comes another NFL December — the time to a make a push in the playoff race and build momentum for the postseason.

Or in the Miami Dolphins’ case, a time to play out the string.

The Dolphins (2-9) have been looking ahead to 2020 for nearly a year, since owner Stephen Ross ordered a rebuild. And they’ve been out of playoff contention since about halftime of their opener, when they trailed the Baltimore Ravens 42-10.

So the Dolphins must settle for the role of spoilers, which they’ll fill Sunday as hosts to Philadelphia. The injury-plagued Eagles (5-6) have lost two in row and trail NFC East leader Dallas by a half game.

This might be Miami’s only opportunity in the final month to hurt another team’s playoff chances.

The Dolphins still have games left against the Jets, Giants and Bengals, who all have losing records. Miami’s finale at the Patriots could be meaningless for the AFC leaders.

Even so, rookie coach Brian Flores isn’t worried about motivation. He said Miami’s effort has been good all season, and he doesn’t anticipate that will change.

“Guys love to play football, and they’re competitors,” Flores said. “If you’re a competitor, you go out there and try to win every week.”

Much of Miami’s roster is made up of young players trying to show they should be part of the team’s future.

“For us,” defensive end Vince Biegel said, “it’s about being able to come to work every single day, work hard, take the coaching, and prepare ourselves for next year and for the foundation of what’s to come for the Miami Dolphins.”

It has been a rocky patch for the Eagles. They lost the past two weeks to the Patriots and Seahawks, two strong postseason contenders, as quarterback Carson Wentz struggled.

Now the Eagles hope to take advantage of a soft December schedule. They still have two games left against the Giants (2-9), and also play Washington (2-9).

Since starting cornerbacks Jalen Mills, Ronald Darby and Avonte Maddox have returned from injuries, the Eagles have improved significantly on defense. They've allowed 17 or fewer points in four straight games and less than 225 yards passing in five consecutive games.

The secondary's ability to cover has allowed Schwartz to blitz more. The Eagles sacked Russell Wilson six times in a 17-9 loss to Seattle last week.

"I think the corners obviously have a lot to do with it. I put an extreme amount of pressure on the corners in this last game," Schwartz said. "It's hard to play Russell Wilson and try to contain not only the passing game, but all his scrambles, unless your corners are going to have to shoulder an extremely heavy burden.

"I think the other thing with blitz is, it's never just one guy. It's everybody doing their job within the scheme. All 11 guys need to execute or you can look bad in blitz, whether it's a physical mistake or a mental mistake. I like where we've been going that way."

The Dolphins lead the NFL with 46 sacks allowed. Ryan Fitzpatrick has been sacked 11 times in the past two weeks.

DeSean Jackson is out for the season, but Alshon Jeffery and Nelson Agholor could return against the Dolphins. Jordan Matthews played the most snaps against Seattle but was released. Greg Ward came off the practice squad and led the unit with six catches.

Second-round pick J.J. Arcega-Whiteside has only five caches this season, but he has made plays of 25-plus yards in consecutive games.

"I think we need more time together," offensive coordinator Mike Groh said. "There have been some moving parts there. So hopefully we're trending toward getting guys healthier and guys that have been in the huddle and on the field together more often."

In the past two weeks Flores tried an onside kick and fake punt in the first half. Both failed, but Flores has showed a willingness all season to take such chances. He said that even when he has better players, trickery will likely be part of the game plan.

“I’m not afraid to call it,” he said. “Maybe that will change. I doubt it will.”