NFL 2019: Buzz is missing, but pressure persists for Vikings 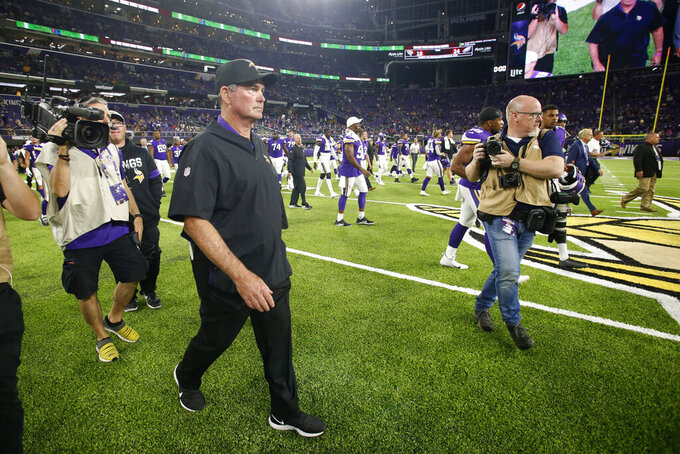 MINNEAPOLIS (AP) — The buzz surrounding the Minnesota Vikings a year ago was unmistakable, after the addition of the best available quarterback to a roster that reached the NFC championship game.

Even for an experience-hardened team directed by a no-nonsense coach, though, the widespread belief that the Vikings were poised to finally win a Super Bowl inevitably penetrated their normally narrow focus. Such infiltration was naturally for the worse, however slight, and not for the better.

"You kind of have a feeling when you're around a team that thinks about expectations or talks about it a lot in the locker room or to the media, what have you, I think that's when you're not playing your best football," wide receiver Adam Thielen said. "I think teams that usually win Super Bowls or are playoff teams consistently, they're just coming out here and busting their tail. They're not worried about that, and I think that's the mindset of this team."

Conveniently for coach Mike Zimmer, quarterback Kirk Cousins and everyone else in purple attempting to pivot from the 8-7-1 record in 2018, punctuated by a lackluster loss at home to division champion Chicago that kept them out of the playoffs, the Vikings have long had their best years amid lowered external expectations.

Their odds to win it all are merely 13th best in the league. The Bears have the defense coming off the more dominant season, and the NFC North title is in their possession. Still, there will be plenty of heat on general manager Rick Spielman, Zimmer and Cousins this fall, given the investment Vikings ownership has made in them — and the lack of postseason success on each of their resumes. They're pushed hard against the salary cap after keeping the core of the team intact.

"I hope the people on the outside say, 'Boy, they better be good this year, or else,'" Cousins said. "I mean, is that pressure? Yeah, but we're professionals. We're living a dream, and we should have pressure on us, and there should be expectations. I hope we get to play here for a lot of years where people really are putting a lot on us because they expect a lot out of us, because we've shown that we can do it. That should be the goal."

Here are some key angles to the 2019 season, which begins for the Vikings at home on Sept. 8 against Atlanta:

Kevin Stefanski has taken over as offensive coordinator, directing a scheme with significant influence from new offensive adviser Gary Kubiak that's heavy on play-action passing and more familiar to Cousins from his time with Washington. With wide receivers Adam Thielen and Stefon Diggs established as one of the NFL's best duos, the Vikings will seek a better run-pass balance and again try to make running back Dalvin Cook a prominent weapon after his first two seasons were shortened by injuries. Rookie Irv Smith Jr. will join in frequent two-tight end formations with Kyle Rudolph, the longest-tenured offensive player on the team.

The offensive line remains a concern until proven otherwise, but first-round draft pick Garrett Bradbury ought to be able to provide a reliable presence in the middle. His arrival at center allowed Pat Elflein to slide to left guard, and Josh Kline was signed to be the new right guard. Cousins could use more consistent protection, but the first priority is to re-establish the ground game. The Vikings were 25th in the NFL in yards per rush and 30th in rushing yards last year.

The kicking game has grown increasingly unstable — and problematic — over Zimmer's tenure, which has entered a sixth season. The Vikings have turned the long snapper role over to rookie Austin Cutting and acquired Kaare Vedvik to likely be the new punter. Dan Bailey is the incumbent kicker, but if he were to struggle, Vedvik, who spent last year on the injured list with Baltimore, could ultimately replace him.

One of the most important offseason developments was the re-signing of linebacker Anthony Barr, who initially agreed to join the New York Jets before changing his mind. He couldn't bring himself to leave a tight-knit group that finished in the top four in the league in yards allowed in each of the last three years. Barr and college buddy Eric Kendricks will start their fifth straight year together manning the middle of Zimmer's defense.

The Vikings have a late bye in Week 12, a welcomed respite during a difficult second half of their schedule. Their last four road games (Kansas City, Dallas, Seattle, Los Angeles Chargers) are all against teams that made the playoffs last year, with a combined record of 44-20, and both trips to the West Coast are for night-time kickoffs. The upside to the tough stretch? The Packers and Bears must visit U.S. Bank Stadium over the final two weeks.