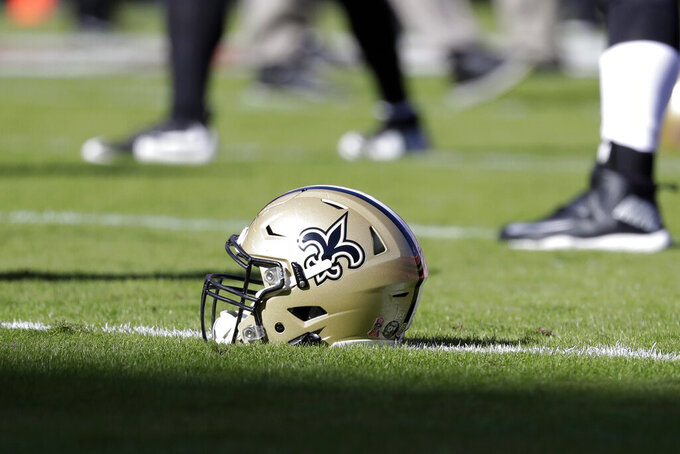 FILE - In this Oct. 23, 2016, file photo, a New Orleans Saints helmet rests on the playing field before an NFL football game in Kansas City, Mo. An Associated Press review of public tax documents found that the Bensons' foundation has given at least $62 million to the Archdiocese of New Orleans and other Catholic causes over the past dozen years, including gifts to schools, universities, charities and individual parishes. (AP Photo/Jeff Roberson, File)

Hundreds of emails detailing the New Orleans Saints’ efforts to conduct damage control for the area's Roman Catholic archdiocese amid its clergy sexual abuse crisis should remain shielded from the public, a court official recommended Thursday.

The recommendation by a court special master came almost three months after The Associated Press urged the release of the confidential emails as a matter of public interest. Those emails emerged as part of a lawsuit against the church and it will ultimately be up to a judge in that case to make the final decision.

Releasing the messages would only “embarrass or bring under public scrutiny” those who tried to help the Archdiocese of New Orleans as it sought to weather the fallout from the clergy abuse crisis, retired Judge Carolyn Gill-Jefferson wrote in a five-page filing.

She agreed with church leaders and the Saints that the communications were private, writing that "the exchange of information during discovery is to be held within the confines of the pending litigation and outside of public view.”

Attorneys for about two dozen men suing the church have alleged the emails show that the NFL team, whose owner is devoutly Catholic, aided the church in its “ pattern and practice of concealing its crimes.”

One of the attorneys, Richard Trahant, said he will object to Gill-Jefferson's recommendation, which has not yet been adopted by the judge presiding over the lawsuit. It was not immediately clear when the judge would rule on the issue.

The Saints have said they have nothing to hide and that the team does not object to the emails being made public during a later stage of the litigation.

The Saints acknowledged giving church leaders advice on how to handle media attention surrounding the 2018 release of a list naming more than 50 clergy members “credibly accused” of sexual abuse.

The Saints have close ties to the archdiocese, and New Orleans Archbishop Gregory Aymond is a close friend of team owner Gayle Benson, who inherited the Saints and the New Orleans Pelicans basketball team when her husband, Tom Benson, died in 2018.

By The Associated Press 9 hrs ago
By Greg Beacham 8 hrs ago
By Will Graves 12 hrs ago
By Dennis Waszak Jr. 14 hrs ago
By Steven Wine 15 hrs ago