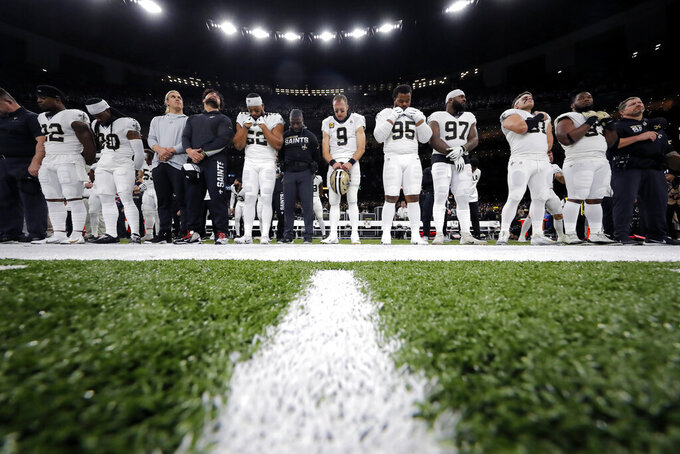 New Orleans Saints quarterback Drew Brees (9) bows his head with teammates for amount of silence for Carley McCord, a local sports journalist and in-game host for the Saints, before an NFL wild-card playoff football game against the Minnesota Vikings, Sunday, Jan. 5, 2020, in New Orleans. The Vikings won 26-20. (AP Photo/Gerald Herbert)

METAIRIE, La. (AP) — Saints coach Sean Payton and players who've been in New Orleans the past few years have endured a cruel kind of three-peat.

Three straight seasons have ended with playoff loses in which the decisive points were scored on the final play. The latest loss Sunday came in overtime against the Minnesota Vikings, who also knocked the Saints out of the playoffs three seasons ago on a 61-yard touchdown as time expired in regulation.

Bouncing back yet again would require a franchise first.

The Saints, who've won the NFC South the past three seasons, have never made the playoffs four years in a row.

Uncertainty surrounds the futures of record-setting quarterback Drew Brees, who turns 41 next week, as well as a handful of other prime contributors who are either becoming free agents or in position to hold out for extensions.

Michael Thomas successfully held out before the final season of his first contract. Dynamic running back Alvin Kamara, one of the Saints' most productive players the past three seasons, is at that juncture now.

Payton acknowledged the challenge of keeping the current roster intact.

“Our job is to try to protect as best we can the guys we feel like moving forward are going to help us the most,” Payton said Tuesday. “That doesn't mean that a player or two that we'd like to have (won't get) a chance to play somewhere else. That's part of the business.”

“There's some musts right now that are at least in my mind positions that we have to solidify to be better,” Payton said, declining to name specific positions. "And I think we'll try to do that any way, shape or form.”

The Saints entered the 2019 season embracing Super Bowl expectations. They nearly made it that far a season earlier, only to have high-profile officiating mistakes go against them when they were trying to close out the NFC championship game against the Los Angeles Rams.

But their 13-3 record wasn't quite good enough this time to earn a first-round bye, and a narrow upset at home in their postseason opener brought a season of promise to a sudden and disappointing end.

It sounds like the Saints expect Brees, whose 74.3% completion rate ranked second in NFL history behind only his 2018 mark of 74.4%, to be back for a 20th season, even though he hasn't committed to that publicly yet.

Added Payton: “I think he wants to play more, and I think, shoot, we saw him play at a high level.”

When Brees injured his thumb in a Week 2 loss and needed surgery, the Saints surprisingly responded by winning five straight with backup Teddy Bridgewater at quarterback. When Brees returned, he continued his assault on the NFL record books. Already the NFL's leader in completions and yards passing since last season, Brees became the career leader in touchdowns when he eclipsed Peyton Manning's previous mark of 539 in December.

Thomas responded to his contract extension with an NFL single-season record 149 catches. Defensive end Cameron Jordan, who also signed an extension, had a career-high 15 1/2 sacks.

Third-string QB Taysom Hill continued to blossom in his role as a utility player, effective as an option QB and as a receiving tight end, whether he was blocking on the perimeter or making big catches down-field. He also continued to thrive on special teams.

Retaining Bridgewater, who was the highest-paid back-up in the NFL, could be difficult after the case he made to be a starter elsewhere next season. Bridgewater declined comment about his future this week.

The Saints claimed cornerback Janoris Jenkins when the Giants waived him. Jenkins had an interception in two regular season games for New Orleans and a forced fumble in the playoff game.

Now the Saints have to decide if they want to pay him the $11.2 million he's due next season or try to negotiate an extension.

Jenkins, who had a career-best five interceptions in 2019 (four with New York) said he wants to remain in New Orleans. Payton indicated the feeling is mutual, saying he was “impressed” by Jenkins' performance.

Bringing back Brees make sense, given his extraordinary efficiency in recent seasons. But to keep Brees performing at a high level will require more depth at receiver — something the club struggled with this season — and a continued commitment to invest in offensive linemen.

Defensively, the Saints were sound and maybe just needed better luck with injuries. Two starters — defensive tackle Sheldon Rankins and defensive end Marcus Davenport — were lost to injuries the last month of the season. One of their top linebackers — Alex Anzalone — missed most of the season.