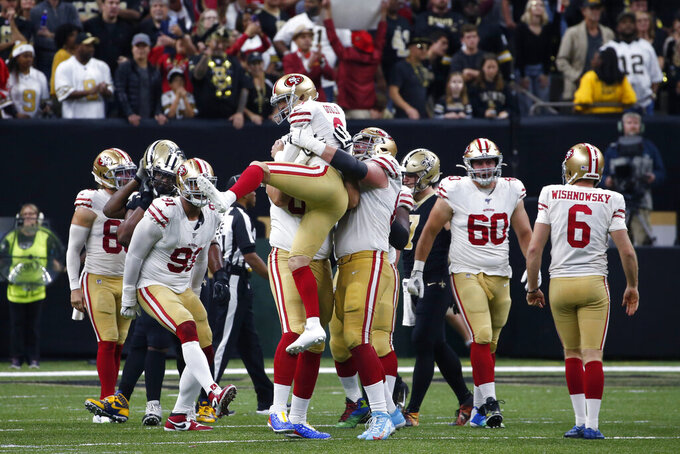 San Francisco 49ers kicker Robbie Gould (9) celebrates his game winning field goal with his team at the end of regulation in the second half an NFL football game against the New Orleans Saints in New Orleans, Sunday, Dec. 8, 2019. The 49ers won 48-46. (AP Photo/Butch Dill)

The Ravens clinched a playoff spot last week after they held off the Buffalo Bills 24-17 for their ninth consecutive victory.

And the Ravens are again the unanimous choice as the top team in the latest AP Pro32 poll.

For the second consecutive week, the Ravens earned all 12 first-place votes for 384 points in balloting Tuesday by media members who regularly cover the NFL.

“The road to the AFC championship goes through Baltimore, as the Ravens win a slugfest over the Bills to maintain control of the No. 1 seed. Lamar Jackson to the Super Bowl in Year 2? Could be,” said Newsday’s Bob Glauber.

The Ravens will open Week 15 as they host the New York Jets on Thursday night.

Jimmy Garoppolo and the San Francisco 49ers moved up a spot to No. 2 after their 48-46 win over the NFC South champion New Orleans Saints on Sunday.

“If the 49ers and Saints meet again in the NFC championship game, it'll be hard to top the twists and turns provided by both teams in Sunday's thrilling matchup at the Superdome,” said Ira Kaufman of Fox 13 in Tampa, Florida.

And despite the loss, the Saints inched up to No. 3.

“You can't ask for much more from Drew Brees against a tough San Francisco defense, but the Saints couldn't stop the 49ers when it counted,” Kaufman said.

The Seattle Seahawks dropped two places to No. 4 after their 28-12 loss to the Los Angeles Rams. The Rams gained two spots to round out the top 10 and became the third team from the NFC West in the first third of the poll.

For the second week in a row, the Kansas City Chiefs are tied in the poll. This time, the Chiefs moved up two places, joining Seattle at No. 4, after holding off the New England Patriots 23-16 to clinch the AFC West. The Patriots dropped two spots No. 7 after their second consecutive loss.

The Green Bay Packers, tied with the Chiefs last week, remained at No. 6 after topping the Washington Redskins 20-15.

The Minnesota Vikings jumped two spots to No. 8 after topping the Detroit Lions.

And the Bills stayed at No. 9 after their loss to the Ravens. The Bills play another high-profile AFC North team when they head to Pittsburgh for a rare appearance on “Sunday Night Football.”