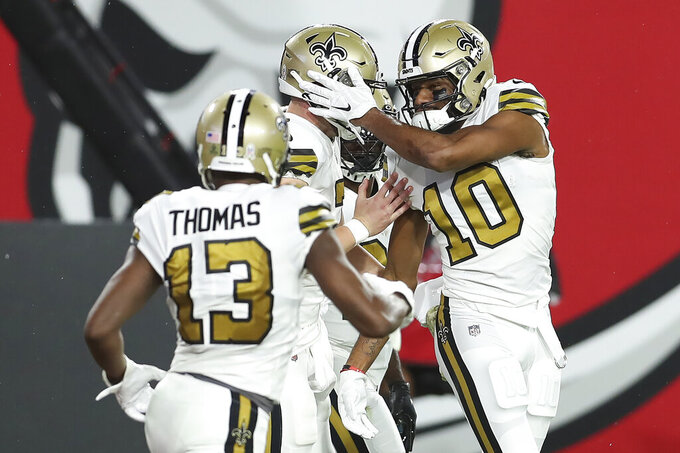 NEW ORLEANS (AP) — Drew Brees and the New Orleans Saints marked the midpoint of the season by making a convincing case that they are again the class of the NFC South — a division they’ve won the past three seasons.

“Those are rare, especially against as good a football team as the one we just played," Brees said of the stunningly lopsided victory of a game between two of the top teams in the NFC. "All the way around, it was a really solid performance by the entire team.”

Saints coach Sean Payton didn't want to oversell the win, understanding how difficult it can be to sustain dominance in the NFL, and how often the league yields unexpected results.

“This is a funny league. Things can go well, and we know week to week" how fortunes can change, Payton said. "Obviously, one of our better games as a team. We’ll enjoy it and then get ready to work.”

Still, after four previous victories by six points or fewer — including two in overtime — the Saints demonstrated in Tampa Bay how formidable they can be on both sides of the ball when everything comes together.

Not only did Brees complete better than 80% of his passes and connect on four touchdown tosses (to move back in front of Brady by three for the all-time NFL lead in scoring strikes), but the Saints also had 138 yards and a TD on the ground against the No. 1 rushing defense in the NFL.

On defense, the Saints largely shut down Brady — despite the addition of Antonio Brown to the Bucs' receiver group. New Orleans sacked Brady three times and also held Tampa Bay to 8 yards rushing.

“It just confirms and affirms who we are and what our identity is as a defense," said linebacker Demario Davis. "We know what our standard is and we’ve been working to put that on tape. ... To be able to play a game like that against a team like that, it means a lot and we won’t take it lightly.”

If the Saints can maintain such effective balance on offense and replicate by far its best defensive performance of the season, they'll be a threat to get back to their first Super Bowl since the 2009 season.

“That’s the type of team win you want to be able to put together at this time of year,” Davis said.

Pretty much any play designed for dynamic running back Alvin Kamara, who leads the Saints in yards rushing with 471 and receiving with 565, and who leads the NFL in yards from scrimmage with 1,036.

While the Saints’ defense was dominant in its most recent showing, a larger sample size will be required to see if it has shored up its ability to shut down opponents in the red zone. The Saints continue to rank last in the NFL in that category, allowing touchdowns on 80% of drives inside their 20-yard line.

Defensive end Trey Hendrickson was thrust into a greater role when starter Marcus Davenport missed the season’s first four games with elbow and toe injuries. Hendrickson has responded by leading the team in sacks with 7 1/2, which ranks third in the NFL. The Saints are keeping his snaps up now that Davenport is back, and he sacked Tampa Bay’s Tom Brady twice on Sunday night.

It turns out the Saints can win without 2019 Offensive Player of the Year Michael Thomas. After setting an NFL record with 149 catches last season, he has eight catches for 68 yards and no TDs through the first half of this season. That doesn’t mean he won’t influence the Saints’ success going forward, but the first half of this season has not been memorable for Thomas. He missed three games with an ankle sprain, was benched one game for an altercation at practice and then missed two more with a hamstring injury before coming back with five catches for 51 yards Sunday night at Tampa Bay.

While the Saints had a handful of key players such as Thomas and Davenport out with injuries early in the season, they are relatively healthy now. The lone starter out of the lineup for now is defensive tackle Sheldon Rankins, who is on injured reserve with a knee sprain but will be eligible to return after three weeks.

78.9 — Brees’ completion rate in his past three games, demonstrating at the very least that the 41-year-old QB is efficient when it comes to getting the ball securely in the hands of playmakers, even if he isn’t often throwing deep.

The Saints will have to avoid a letdown when they host the injury-plagued San Francisco 49ers in the Superdome on Sunday.