Seahawks' Wagner adds another notch to his career resume 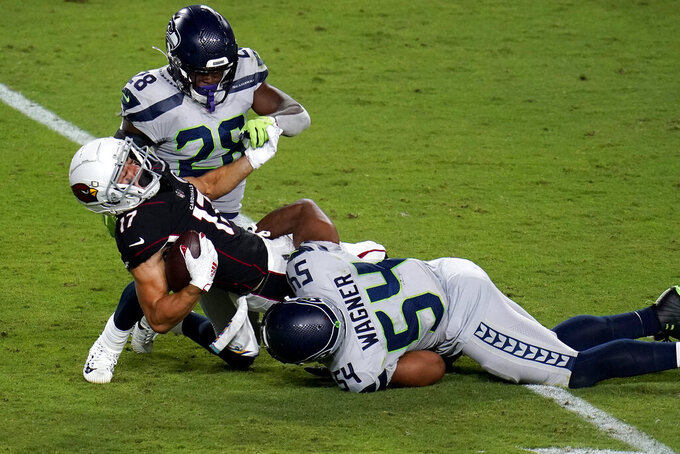 RENTON, Wash. (AP) — Bobby Wagner reached another milestone last week, which at this point of his career is one more bullet point to his already impressive resume.

Or as his coaches and teammates describe it, what will be Wagner’s Hall of Fame biography.

The latest addition to Wagner’s long list of accolades came with his five tackles last week against Philadelphia, giving him 101 for the season. That’s tied for fourth in the league and made him one of seven players to already reach the century mark this season.

But it was reaching 100 tackles that put Wagner in rare company yet again. He became just the third player since 2000 to have nine consecutive seasons with at least 100 tackles, joining London Fletcher and Keith Brooking. Fletcher reached the mark in an astounding 14 straight seasons.

This hasn’t been Wagner’s best season. But his consistency of being the unquestioned leader in the middle of Seattle’s defense has continued.

“I just think it’s just the time you put in the offseason, all the studying, all the hours that you put in to try and be a great player to have something like that and have it happen over consecutive years it just shows consistency,” Wagner said on Wednesday. “I always try to be a consistent player. Being able to do that just kind of shows how consistent someone can be.”

It’s been a mixed season for Wagner as the anchor of Seattle’s defense. Wagner was among those taking personal offense to the way Seattle’s defense played for the first half of the season. The Seahawks struggled badly at pressuring the quarterback and in turn defending the pass, a stat where they still rank last in the league even with recent improvement.

But that defense has started to come around. Seattle had six more sacks in the win over Philadelphia and has 22 in the past five games combined. The pass defense that couldn’t contain anyone early in the year has held four of the past five opponents under 300 net yards passing.

“We definitely can feel the momentum of the shift happening and this is what we have been waiting for,” Seattle coach Pete Carroll said. We all had to be patient because we all wanted to see it going, but now it’s time to keep proving it and because we did something last week doesn’t mean anything unless we do it again.”

Wagner understands the opportunity in the coming weeks and the chance for Seattle’s defense to continue its improvement. The next two games are against the New York teams, first the Giants then the Jets. The Jets are last in the league in offensive yards per game, and the Giants are 29th.

“Like I talked about him, he’s a Hall of Famer. he is exactly what you would hope to write up as almost the definition for the position. And there’s been some great ones and he’s one of them.”

NOTES: Carroll said DE Carlos Dunlap has a sore foot and his status for this week is unknown. Carroll said Dunlap has “a little something going on,” but wasn’t considered serious. ... Based off the situation last week with Denver, the Seahawks have decided to keep practice squad QB Danny Etling separate from starter Russell Wilson and backup Geno Smith moving forward as a precaution. “I hate to say we had to wait to see something bad happen, but we have stepped forward in terms of taking care of Danny, so to make sure that he is apart from the other QBs,” Carroll said.