A season removed from MVP, Ravens' Jackson has room to grow 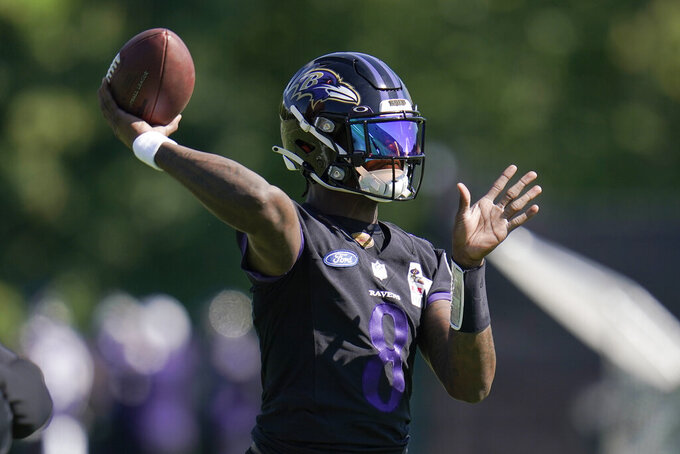 In particular, he realizes that big plays have been lacking at times.

“People are always saying we throw short, intermediate routes and stuff like that — 5-yard, 10-yard routes," Jackson said. "But we had some chances last year. We hit some of them, but we’re just trying to be more consistent this year.”

Jackson was the league's MVP in 2019, exceeding expectations in his second season after he was the fifth quarterback taken in the 2018 draft. Last year, however, his passing numbers slipped a bit, and it's clear that at age 24, he still has room to grow. That's what this offseason is about.

The Ravens have taken steps to improve their passing game, and Jackson has strides he needs to make individually.

Jackson talked a bit at minicamp Wednesday about wanting the team's deep passing to improve, and he also mentioned his footwork as a point of emphasis. The Ravens ranked last in the NFL last season in yards passing per game, but they were No. 1 in rushing and didn't need to rely on Jackson's arm that much. Baltimore was also last in pass attempts.

There is so much that Jackson does well. He's rushed for over 1,000 yards in two straight seasons — the first quarterback ever to do that — and is 30-7 as a starter. Still, his longest completion last season was just 47 yards — 3 yards shorter than his longest run. In the playoff loss to Buffalo that ended Baltimore's season, the Ravens managed only three points.

And if a quarterback is going to make significant improvements and adjustments, this may be the easiest time of year to do it.

“One thing that he and I have talked about are the great basketball players, Michael Jordan comes to mind," quarterbacks coach James Urban said. "He had to learn jump shots. So, you learn a jump shot, and you just keep expanding your game that way.”

The memory of that postseason loss to the Bills — in which he was knocked out of the game with a concussion — still lingers for Jackson.

Since the end of last season, the Ravens have tried to give Jackson more receiving threats. Sammy Watkins is now with Baltimore, and the Ravens also took receiver Rashod Bateman in the first round of the draft. All of these moves — and this crucial offseason for Jackson — come with the quarterback's contract situation looming in the background.

The Ravens exercised the fifth-year option for Jackson, and he isn't due to become an unrestricted free agent until 2023. Now the question is what a contract extension for Jackson might look like — and when it might get done.

“Look what he's done. He's going to get paid. He knows that," Harbaugh said. "The question becomes: What's he going to do? What's his legacy going to be as a quarterback? That's what he focuses on.”

That last question will depend on whether he has more MVP seasons in store, and whether he can lead the Ravens deeper into the postseason.

“I don't know how close I am to my legacy. I don't know how far I am," Jackson said. "I'm trying to win the Super Bowl. MVPs and stuff like that, having winning records and stuff, that's cool, but I want to bring me a Lombardi here myself.”