Titans coach still waiting for chance to work with Beasley 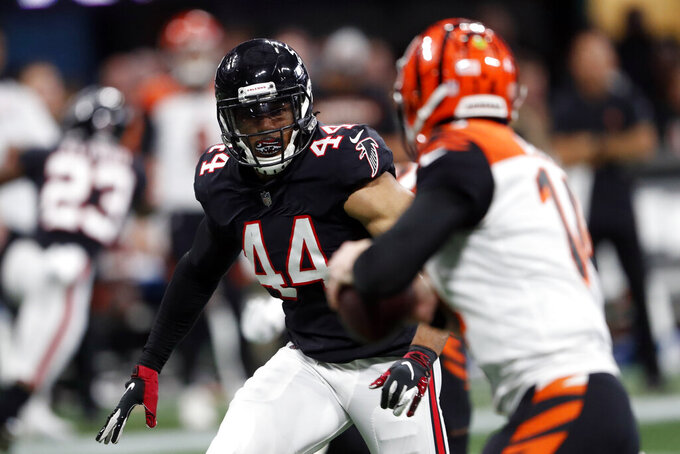 FILE - In this Sept. 30, 2018, file photo, Atlanta Falcons linebacker Vic Beasley (44) rushes against the Cincinnati Bengals during the second half of an NFL football game in Atlanta. Tennessee Titans general manager Jon Robinson says he has been in touch with Beasley and that the linebacker knows his absence from training camp is unexcused. The Titans signed him to a one-year deal for $9.5 million in March to help bulk up their pass rush. (AP Photo/John Bazemore, File)

A week after rookies and other players got started, Tennessee still is waiting for Beasley to report.

And Vrabel said Wednesday he's not had any communication with Tennessee's top free agent signee of the offseason even as the coach made clear he can't wait to see Beasley.

“He’s not here,” Vrabel said. “Everybody else is, and he’s under contract. We expect him to be here. But again, have reached out, have not had much conversation with him. And we still look forward to getting him in here and coaching him when he gets here. I want to coach him and want him to be a part of the football team.”

Beasley led the NFL with 15 1/2 sacks in 2016 after being the eighth overall pick by Atlanta out of Clemson in 2015. The Titans signed Beasley to a one-year, $9.5 million contract in March wanting to see what Vrabel could do with a linebacker who has 37 1/2 sacks in his career.

General manager Jon Robinson issued a statement last week that he had been in contact with Beasley, who knew his absence from training camp was unexcused. Robinson also said Beasley told him he would report in the near future.

The Titans put Beasley on the Reserve/Did Not Report list on July 28. Beasley is subject to a $50,000 fine each day he’s absent from training camp.

Tennessee already has had seven days with rookies, quarterbacks and injured players. Vrabel had his first full team meeting Sunday, and the Titans are scheduled for their first team practice Aug. 14.

Once Beasley reports, he'll have to go through the testing process that requires three negative tests over the course of five days and then a physical.

“That’s where we’re at with that,” Vrabel said.

Notes: The Titans announced later Wednesday that linebacker Jayon Brown passed his physical and will be removed from the physically unable to perform list.