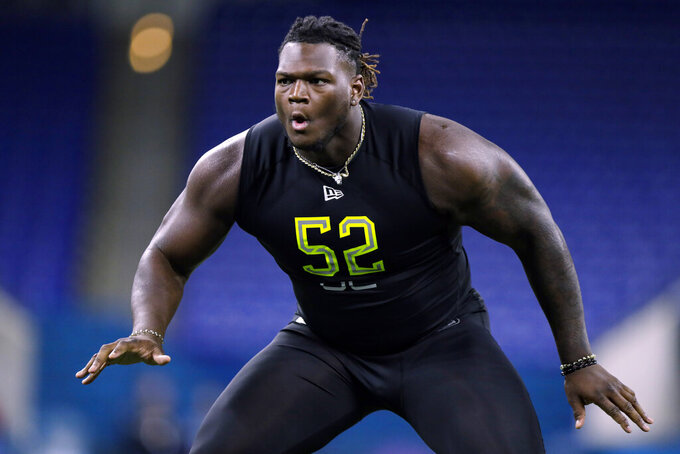 FILE - In this Feb. 28, 2020, file photo, Georgia offensive lineman Isaiah Wilson runs a drill at the NFL football scouting combine in Indianapolis. The Tennessee Titans have placed their top draft pick, offensive lineman Isaiah Wilson, on the COVID-19/reserve list. The former Georgia star remains the one member of their six-man draft class that has yet to agree to a contract. (AP Photo/Michael Conroy, File)

NASHVILLE, Tenn. (AP) — The Tennessee Titans are trickling into the team's headquarters for a training camp with their first-round draft pick Isaiah Wilson on the COVID-19/reserve list.

Coach Mike Vrabel said Tuesday that Wilson, the lone unsigned member of the Titans' six-man draft class, has been placed on the list. That means Wilson, the No. 29 draft pick overall out of Georgia, either tested positive or came in close contact with someone who did.

This is the third training camp for Vrabel with his Titans coming off the franchise's first AFC championship game appearance in 17 years. The coronavirus pandemic makes this a very different camp from Vrabel's first two.

The coach said he’s learned he can't eliminate distractions and must manage them the best way possible. The health and safety of the team remains the top concern.

“We’re going to navigate through a pandemic the likes of which that we’ve never seen or experienced,” Vrabel said. “So those are all going to still happen through training camp. But now we’re going to have to manage a disease that’s ravaging across the country as we enter into training camp.”

Wilson is expected to compete with veteran Dennis Kelly for the starting right tackle job left vacant by Jack Conklin's departure for Cleveland as a free agent.

Vrabel also said veteran linebacker Jayon Brown will start camp on the physically unable to perform list with an unspecified issue. Undrafted rookie free agent Anthony McKinney, an offensive lineman from TCU, told Vrabel and general manager Jon Robinson that he had decided to opt out of playing.

Whether or not any other Titans decide to opt out, Vrabel said he had not talked to any yet. The deadline to opt out of playing this season is Monday.

“We’ll wait till our players make the decision that’s in the best interest for them and their family before we proceed,” Vrabel said.

Vrabel also did not have any update on the Titans' interest in Jadeveon Clowney, though he was asked twice about the free agent linebacker. Vrabel said that he didn’t think Clowney was scheduled for a flight to Nashville to meet with team doctors as he spoke to reporters on a video conference call.

“He’s a free agent, one that we’ve had contact with,” Vrabel said. “But he’s not under contract with the Tennessee Titans.”

The Titans brought their first group of players in July 23 with a second group Tuesday as part of a seven-day window to open camp. Players must test and self-quarantine and repeat that with a third COVID-19 test on the fourth day.

Physicals follow on the fifth day. The sixth day features actual equipment fitting, videos from the NFL before finally getting to weightlifting, meetings and a walk-through on the seventh day. Rookies needed a tour of the building with NFL facilities shut down in March.

The Titans will find dividers between each locker extending out 4 feet, which had to be approved by both the NFL and the NFL Players Association. Vrabel said the other alternative was turning the indoor practice field into a locker room.

Instead, the indoor practice field will be used for team meetings, the first on Aug. 2, along with offensive and defensive meetings. Vrabel said he preferred to wait until everyone was on hand for a meeting rather than meet virtually after doing the entire offseason program through video conferences.