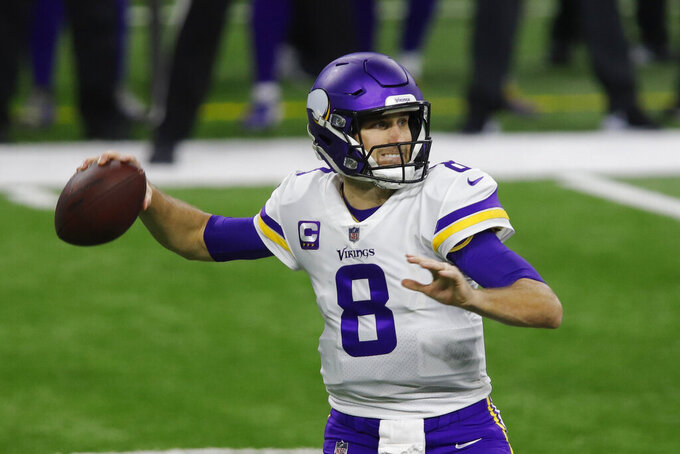 FILE - In this Sunday, Jan. 3, 2021 file photo, Minnesota Vikings quarterback Kirk Cousins throws during the first half of an NFL football game against the Detroit Lions in Detroit. Minnesota Vikings general manager Rick Spielman says the team has no plan to move on from quarterback Kirk Cousins. Spielman's comments were his first on the team's roster since the season ended. (AP Photo/Al Goldis, File)

MINNEAPOLIS (AP) — The quarterback carousel has begun to spin around the NFL for the second straight offseason, with even the slight potential of further movement creating a flurry of speculation about who will man these vital positions for certain teams once the cuts, signings and trades are settled.

The Minnesota Vikings don't plan to put Kirk Cousins on the ride, according to general manager Rick Spielman in comments made Wednesday.

“Kirk is our quarterback going forward, and I look forward to him with another year in this system. I’m excited for him and what he’s going to bring to our team next year.”

Cousins, who had a career-high 35 touchdown passes in 2020, will count $31 million against the salary cap in 2021. His $35 million salary for 2022 will fully guarantee on March 19 if he remains on the roster, bringing his cap number for next year to a whopping $45 million.

The cap hit that the Vikings would incur for releasing — or, to a lesser extent, trading — Cousins would seem to preclude a move. The Detroit Lions, however, have already agreed to trade Matthew Stafford to the Los Angeles Rams for Jared Goff.

The Philadelphia Eagles have reached a deal with the Indianapolis Colts to send them Carson Wentz. In those cases at least, the dead money that lands on a team's cap from remaining bonus prorations for departing players did not ultimately prove to be prohibitive for such high-profile swaps.

If the Vikings actually were to be open to moving on from Cousins, who first signed with them in 2018, the public statements Wednesday by Spielman would be the natural stance to take in the game of poker that's usually required with such negotiations.

Spielman, of course, said a year ago that there was no reason to “anticipate that Stefon Diggs is not going to be a Minnesota Viking” before trading him to the Buffalo Bills roughly three weeks later. In 2013, Spielman said he had “no intent to trade Percy Harvin” about a month before dealing him to the Seattle Seahawks.

What's most certain about the rest of the offseason for the Vikings is more proven players being let go to create space under the salary cap that tightened for 2021 after lost league-wide revenues during the pandemic-altered 2020 season. Tight end Kyle Rudolph, the longest-tenured player on the roster and the fifth-leading receiver in team history, was the first to go.