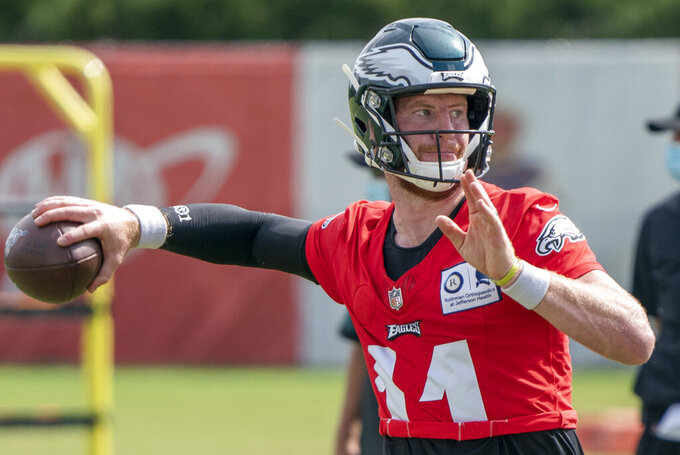 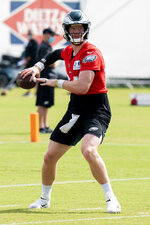 Carson Wentz enters his fifth season with the Philadelphia Eagles as the unquestioned leader of a team that had its greatest success without him.

“For Carson, it’s just a matter of running the show, running the offense, running the team,” coach Doug Pederson said. “He knows how to play this game. He plays it just like a professional. He’s aggressive.”

Wentz rebounded from two injury-shortened seasons to start 16 games last year. He led a depleted offense to four straight wins down the stretch and an NFC East title. But he suffered a concussion in the first quarter of a wild-card loss to Seattle, so he is still seeking his first career playoff win.

Backup Nick Foles stepped in when Wentz injured his knee in 2017 and led the Eagles to the franchise’s first Super Bowl title. Foles filled in again the following year and guided the team to a playoff win on the road after Wentz sustained a season-ending back injury late in that season.

“We have to maintain that aggressiveness, and I think with just continuing to teach and maybe part of the injuries that he’s gone through in the last couple of seasons are things that he can learn from,” Pederson said. “Things that we’ve talked about that he’s learned from and you see that out on the field. It’s a one-day-at-a-time mentality. It’s a one-game mentality once we get into the regular season, and that’s what we focus on.”

Wentz has embraced his leadership role, calling it a “natural progression.” He has a group of talented young receivers to go with veterans DeSean Jackson and Alshon Jeffery, and his go-to guys are tight ends Zach Ertz and Dallas Goedert.

“I’m just trying to not only get better personally but to make everyone around me better,” Wentz said. “That’s more than just physical things on the field. That’s the mental side of things, understanding the whys behind how we do things or run certain routes or certain concepts. And just trying to make sure that everyone is on the same page so they can think and react and respond the same way I see things on certain plays and certain things.”

The Eagles are the only team in the division with a returning head coach. Pederson enters his fifth season in Philadelphia while the Giants (Joe Judge), Cowboys (Mike McCarthy) and Washington (Ron Rivera) have new guys in charge in a season that was altered by the coronavirus shutdown during the offseason.

The team selected three wide receivers in the draft. First-round pick Jalen Reagor has been impressive in camp, even drawing comparisons to Julio Jones from Wentz. John Hightower and Quez Watkins have shown flashes of their potential. The trio has plenty speed that should open up Philly’s deep passing attack.

The Eagles invest a lot of money on both sides of the line. Defensive tackle Javon Hargrave was a big offseason addition, but has been sidelined in camp. However, Malik Jackson is back after an injury ended his first season in Philly after one game. Five-time Pro Bowl defensive tackle Fletcher Cox anchors the line. Veterans Brandon Graham and Derek Barnett are part of a deep rotation at end.

Three-time Pro Bowl cornerback Darius Slay arrived in a trade with Detroit and Avonte Maddox will likely start on the opposite side. Nickell Robey-Coleman, another newcomer, steps into the nickel cornerback spot with plenty of competition. Veteran safety Rodney McLeod has a familiar face playing next to him as Jalen Mills moves from cornerback to replace safety Malcolm Jenkins.

Miles Sanders had 1,327 scrimmage yards, including 818 yards rushing, and six touchdowns combined as a rookie. He’ll get much of the work now that Jordan Howard is gone. Boston Scott and Corey Clement will complement Sanders, plus there’s a few undrafted rookies competing for spots.